We often think of technology as the source of solutions for humanity - solutions for the massive challenges that impact us all, like climate change and global security. Technology certainly has that potential, but should be equally valued for its ability to serve and improve the lives of specific target groups when applied intelligently to local needs. In this article we travel to Johannesburg, Cali, Mumbai, and Delhi to explore examples of innovative inventions and services that transform opportunities for targeted segments of the population - underprivileged students, the disabled, pregnant women and young children. 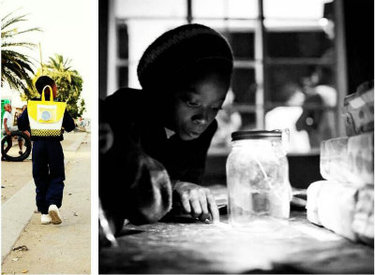 In Rustenburg, outside of Johannesburg, one young business named Rethaka is part of a small but growing number of South African innovators who are making technology speak the language of 'other' contexts, rather than mimicking the First World 'smart city' concept. Rethaka up-cycles discarded plastic shopping bags into trendy school backpacks. Each backpack includes a lightweight solar panel that charges during the day so that at night it can provide up to twelve hours of light from small LED lights. This simple invention allows underprivileged schoolchildren with little or no electricity to study after dark. The schoolbags are also made with reflective material, increasing visibility and safety for children who walk to school (three children die daily on South African roads). Rethaka, with its focus on 'uplifting the greater society' and being 'change agents,' is a model of imagination and creativity directed towards addressing the tangible social realities at hand.

Even though Colombia is one of the regional leaders in terms of information technology (IT) availability, the country's pervasive social inequality still limits IT's potential. In Cali, the phone company Claro is donating 35,000 Internet-enabled Android tablets to schools. Each tablet comes with the open education platform Educlic, which allows for user-generated educational content. The city government is responsible for tablet distribution and the creation of 2,050 digital classrooms in 93 schools in Cali. Each digital classroom will have at least 40 personal computers, a video projector and a portable computer for the teacher. Of course, the distribution of free electronics is not sustainable. To make the initiative as effective as possible, however, the city government will train teachers in digital pedagogy.

India's disabled population jumped by nearly 25 percent in a decade, according to the 2011 census, and the majority of disabled people reside in urban areas. Mumbai-based Barrier Break has championed the cause of India's differently abled by experimenting with technologies to help people with a variety of impairments. One creation for the visually impaired is "Swell Paper," special paper for printed images which will expand when placed under heat. Barrier Break also launched a screen reader that gives blind students and employees access to computers. Not only does the organization harness technology to overcome disabilities, but it also depends on and empowers the disabled: 75 percent of the organization's staff have a disability, emphasizing their employability in a society where many of these issues are still taboo. 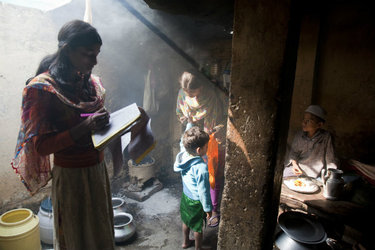 Also in India, the government has launched a Mother and Child Tracking System (MCTS) as part of a broader initiative to improve health outcomes for mothers and children under the age of two. In and around Delhi, this system operates as a feedback system for community health care providers. Health workers record their services on paper-based forms. Data entry operators then update local data systems that feed into a national central server. This data is used to develop work plans and schedule home visits, information that is relayed back to the health workers via SMS. The National Informatics Center has introduced a call center that conducts random calls to pregnant and young mothers to verify that the data captured reflects the services received. The MCTS is a powerful tool to strengthen maternal, neonatal, and child health outcomes by using data to monitor gaps and priorities.

In each of the above cases, the technology in question only aims to help a narrow segment of the population. However, this limited scope allows for innovations to be tailored more precisely to the given population's needs. And as the scope zooms in, the potential impact magnifies. Join us on URB.im to read more and to share your thoughts.