It seems that my last blog post, A Target Intervention on Behalf of My Daughters, has struck a nerve. To my surprise, it got a lot of national attention. The Huffington Post ran it. It was featured on A Mighty Girl's Facebook page, and it has been shared thousands of times in the past few days. (All of the attention has also crashed my blog quite a few times, so if you are still having trouble clicking over, please be patient. I promise, we are working hard to fix it.)

Several of you have been asking if I have heard back from Target.

I have been in touch with the Target Corporate Headquarters and I am so excited to report that they have read all of the comments that moms are leaving in response to that post! I am beyond thrilled to announce that I am going to start working with Target towards change, starting in my own house. They have asked me to provide them with some specific feedback about children's clothes and I am going to start working towards a behind the scenes partnership with them to get more of what moms and girls want into their stores. Thank you Target for hearing our voices and taking our concerns very seriously!

There was a lot of other discussion surrounding that post as well.

First, some people entirely missed the point. This response was my personal favorite:

I want to be very clear that I don't care what the size label says on my daughters' clothing. My concern was, in fact, that shorts being offered to our girls are just too short. Period. The end. And it extends to other articles of clothing as well.

All of my children happen to fall into the "average" range on the charts the doctors use, sometimes even being slightly underweight, not that it should matter. I realize all children are built differently. I'm not at all concerned with the numbers on the labels of their clothing, but as a consumer I feel that I have the right to speak out when I'm not being offered what I want. And what I want is appropriate clothes for my daughters.

Many discussions were started as a result of my first post about how we are sexualizing our girls too early, and that the clothing industry is contributing to the problem. While I actually agree with that, my main concerns as a shopper right now are mostly practical.

Can my daughter sit "criss cross applesauce" on the reading rug? Does it meet the finger tip length dress code rule? Are those too tight for her to button herself after using the bathroom? What do I tell grandma when she asks what sizes the kids are wearing now so that she can start Christmas shopping? And the obvious, is my daughter too exposed? We prefer to keep our private parts private around here, thank you very much.

After speaking with Target and reading several of your responses, I realized that it may have been a mistake to use toddler sizes in my first post. Yes, it is true that up to size 3T allows for the additional girth of a diaper.

Also, it may have been a little unfair to use the Fisher Price pants as a comparison because those are older hand-me-downs and no longer available on the market.

Some people also wanted me to focus on the fit of boys' clothing as compared to girls'. Others wanted me to call out other stores besides Target. So, hold on to you hats and grab a drink, because this may take a while, but don't worry because there will be a lot of pictures.

I went back to Target today with my daughter and our teenage babysitter, Lindsay, after my discussion with them. I wanted to take pictures to document the current state of the clothes in their children's and juniors' departments so that I can look back in a few months and see how much of a difference our voices have made. Hopefully we will see a lot of change very soon. This is what I found today:

Since I was told it would be better to compare children's sizes instead of toddlers, I focused on a size XS (4-5). 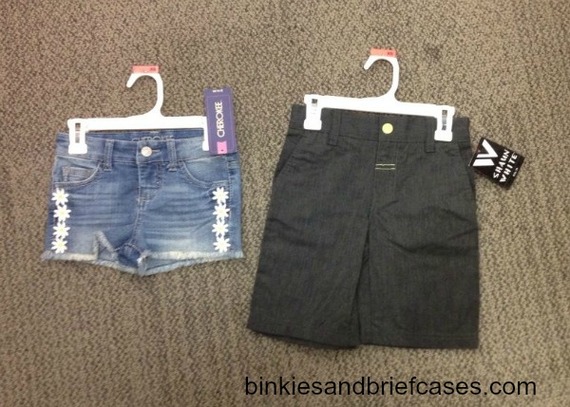 Do you see something wrong here? These are shorts for 4-year-olds. 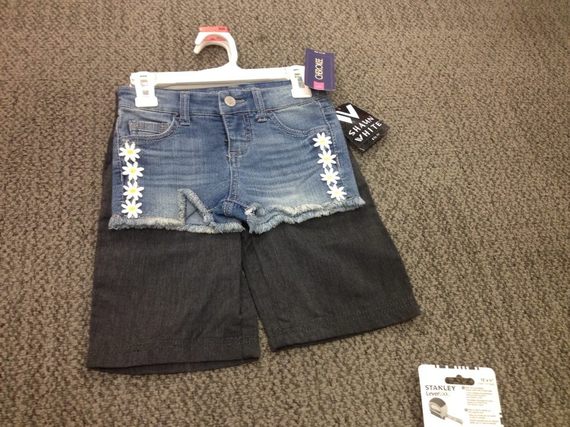 This is a pair of girls' XS Cherokee jean shorts. I measured the inseam. It was 1 inch. 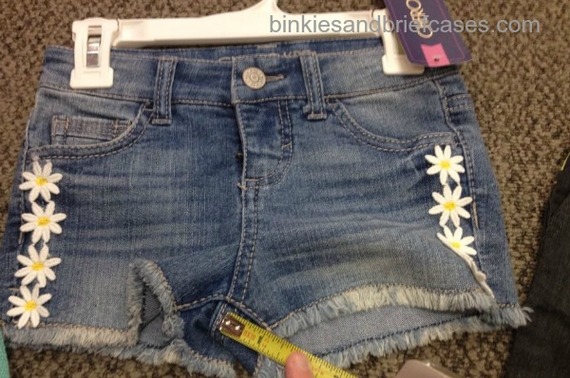 This is a pair of Shaun White shorts for boys in the same size, XS. (I tried to find the same Cherokee brand for boys, but since it is October, pickings were slim in the shorts department.) The inseam on the same sized shorts in the boys' department was almost 7 times longer. 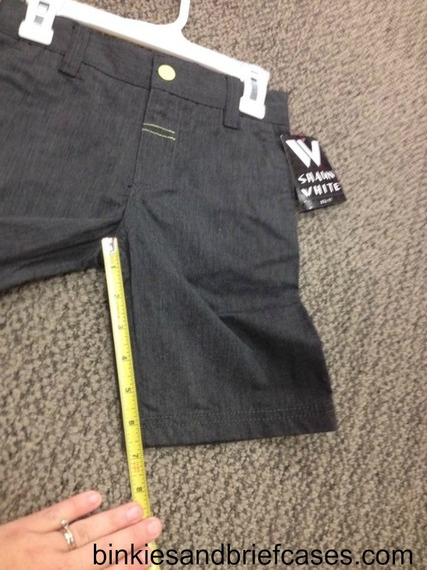 A lot of commenters on my last post simply said, "Who cares? Just buy a bigger size." I was curious how high I would need to go up in sizes in the girl's department until I found a pair of shorts that matched the length of the boys'. 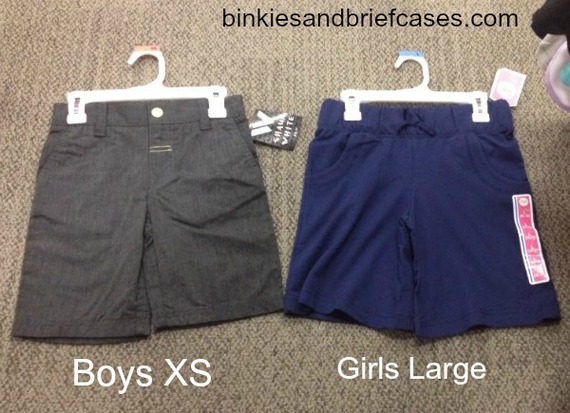 Those are the same boys XS (4-5) Shaun White shorts on the left. The only shorts in the girls' department that matched them for length were a girls' size Large (10-12). I had to go for athletic shorts because they didn't make any denim shorts for girls with an inseam this long.

The problem, besides the fact that we are calling the same amount of fabric Large for girls and Extra Small for boys, is that those size Large shorts would never fit my 5-year-old daughter in the waist. So even if I tried to buy her a bigger size, they wouldn't fit.

Let's move on and compare some of the same brands, though. Please excuse my less than stellar phone pictures.

On the left, boys' size 5 boot cut Cherokee jeans. On the right, the boot cut for girls in the same size. 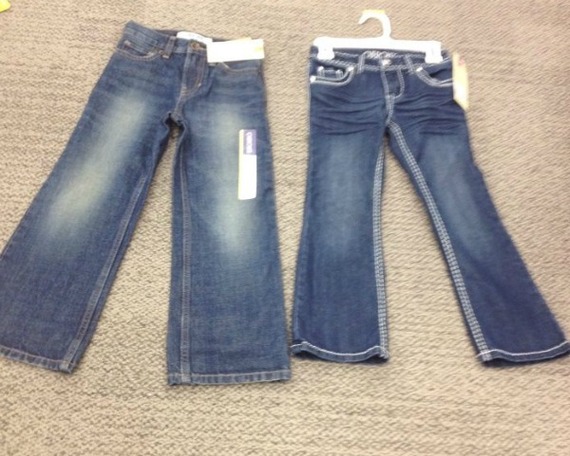 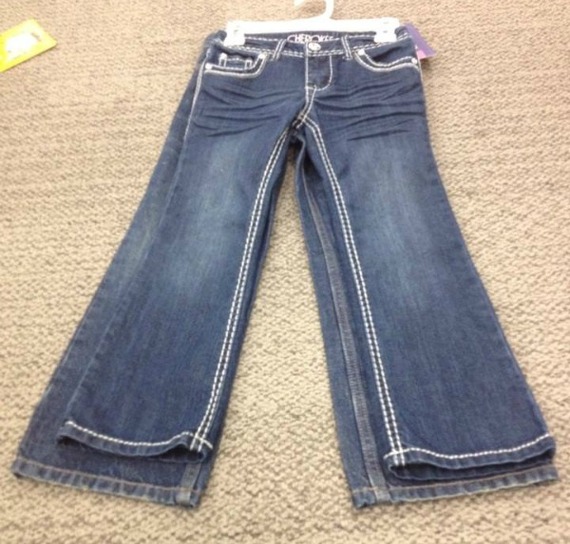 The same thing happens with shirts. Girls' on the left, boys' on the right. 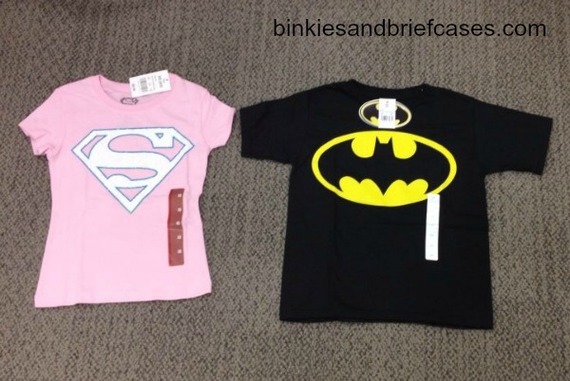 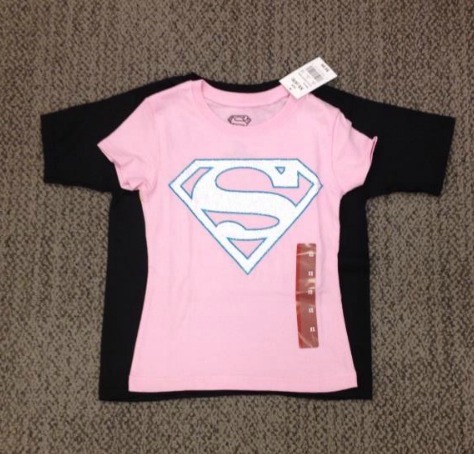 These shirts are labeled the same size. I have no idea why an XS shirt (size 4-5) needs to curve like that to show the shape of a young girl's body, a body that hasn't even developed the curves that a woman's shirt in that same cut would be trying to feature.

However, I did see some things in Target today that made me smile.

First of all, they had super heroes and Ninja Turtles in the girls' and juniors' sections. And a lot of the shirts weren't even pink. 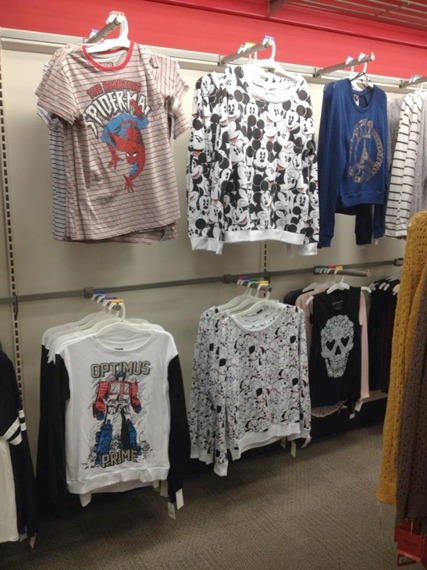 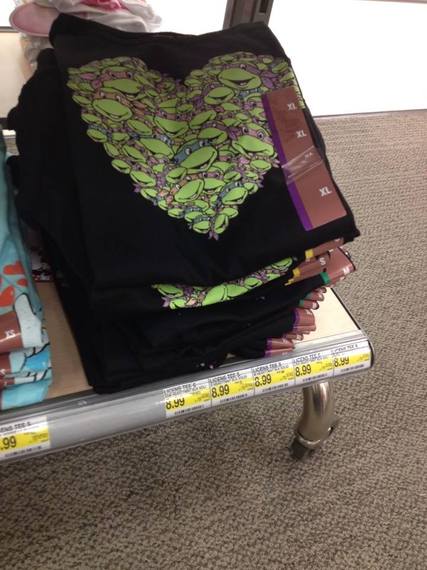 They also had a lot of Frozen character items that were not entirely pink or purple or glittery (although there was a lot of that too). The "princess culture" stuff doesn't bother me. As a matter of fact, I just made my daughter an Elsa dress that will be her Halloween costume. My girls are obsessed with Frozen just as much as any others. I also saw some pink in the boys' and men's sections. FYI -- Target also had Frozen shirts for boys. 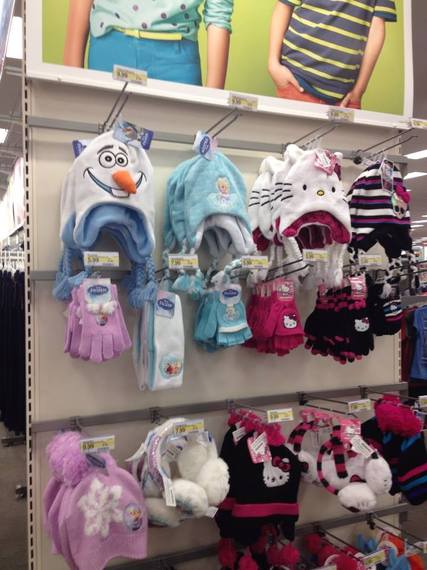 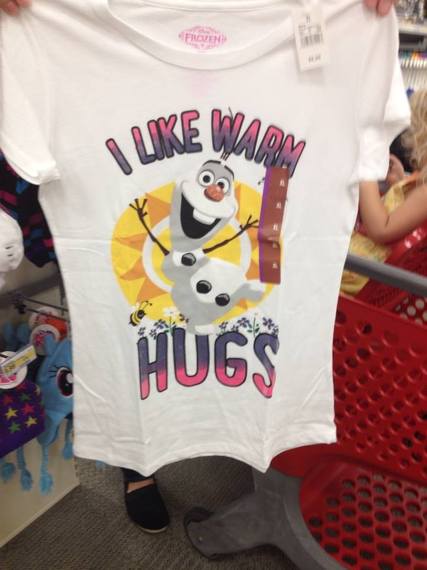 While we were at Target we also stopped by the women's and junior's department to measure the inseam on the shorts over there. 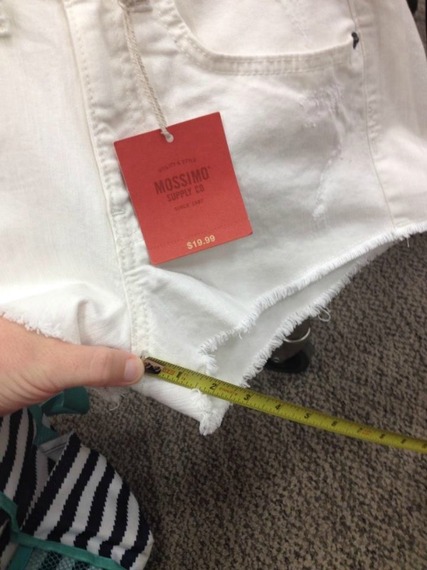 Not quite 2 inches on a women's size 7. Let me remind you that this is less than one inch longer than the shorts intended for toddlers.

Lest anyone think I am specifically picking on Target (which I am, because they are and always will be my favorite and I hold them to high standards), we also went to Kohl's.

And this is the part where I feel the need to formally apologize to Target, because in my experience today Kohl's was worse.

If we want to crown a winner of gender stereotyping the clothes in the children's department, Kohl's won by a landslide. It was pretty bad.

Guess how many super hero or comic book character shirts I found in the girls' department there? Zero. The boy's department was full of them, though. 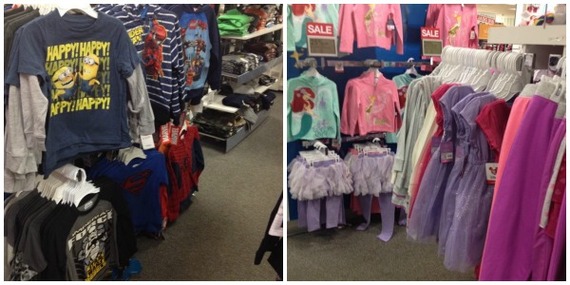 While we were at Kohl's, I did get the opportunity to compare several name brands of shorts.

Remember how there was some debate about how it isn't fair to compare different brands because they all cut their clothes differently?

Well, it turns out that Oshkosh and Lee have the same idea of what a size 4 should look like for a boy. 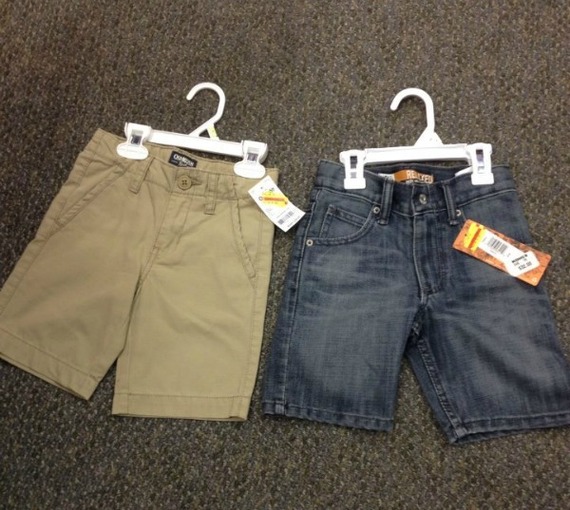 But Mudd is a little confused about how much fabric is necessary to make that same size for a girl. 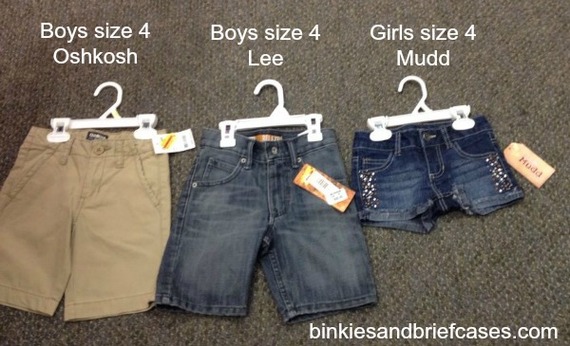 Once again, I'd like to remind everyone that these are clothes for preschoolers. 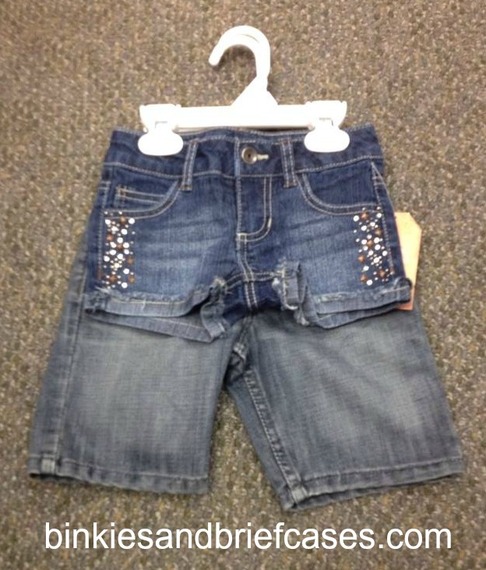 It's a scary world out there, trying to shop for our daughters.

Yes, I suppose I could start buying clothes from the boys' section, but why should I have to? I happen to have girls who actually like pink and purple and sparkles. They deserve better than what we are giving them.

And no, it is not about shorter clothes costing less money to manufacture. The clothes in the boys' section don't cost twice as much, although they have more fabric.

And no, it is not about me "slut shaming" young girls as a writer, because a) gross and b) there is no such thing as a 4-year-old slut and c) little girls just want to be able to play comfortably in their clothes. I've heard from a lot of people this week. Not one of them was a preschooler who felt "slut shamed" by my last post.

And no, it is not a quality control issue or because the clothes are designed to fit smaller Asian children (which is an actual response I got this week from a commenter). I spoke to Target's Public Relation's team. I heard straight from the source that their clothes, while perhaps manufactured elsewhere (I didn't ask), are designed right here in the U.S. by not one, but two teams of designers. One team focuses on the look of the clothes, while the other focuses on fit. They use statistical data from kids right here and try to fit their clothes to the 50th percentile, doing the best they can to meet in the middle and fit as many kids as they can.

No matter what, there is no excuse for trying to sell me a one inch inseam. Ever. They literally make underwear with longer inseams than that.

The good news is that Target is listening to us. They want to know what moms and dads are looking for when we purchase clothes for our kids. They heard us and they recognize that there is a problem. And they have promised to start working with me to fix it!


I hope this post cleared up any confusion you had about what I was saying in my last post. I am not now and will never be ashamed of my daughters' bodies.

I just want stores to sell some freaking longer shorts.

To follow along with Stephanie's quest to get better clothing options for our daughters into stores, be sure to visit Binkies and Briefcases and follow her Facebook page.

Baby Clothes That Just DON'T Make Sense On Babies
More:
targetParentsBest of HuffPost girlschildrens clothing
Newsletter Sign Up
Raise the kind of person you'd like to know
Subscribe to our parenting newsletter.
Successfully Subscribed!
Realness delivered to your inbox