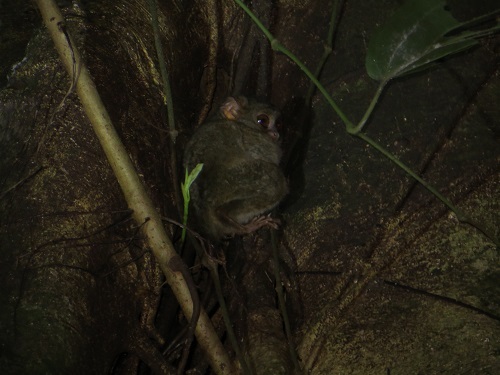 Its specially adapted vertebrae allow it to turn its head 180 degrees in both directions so that it can see behind itself without moving its body, and its praeternaturally strong, long, hind legs enable it to jump more than 40 times its own body length, or over 16 feet from branch to branch.

On top of all that, it's the only know primate in the world to be solely carnivorous.

'It' is the tarsier. Europeans so named it when they first encountered it in South-East Asian island jungles - from the Greek via New Latin for tarsals or anklebones, of which it possesses unusually long ones. In parts of the Philippines it is known as mawmag, with other names elsewhere. 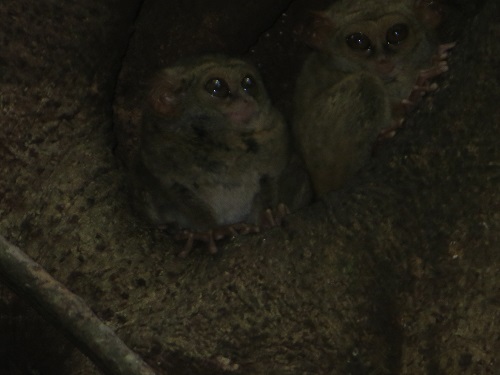 All tarsier subspecies are similar in that they have small, stocky bodies, longish tails with fur varying from grey to brown to ochre, and are purely nocturnal.

Measuring three and half to five and a half inches, no longer than an adult man's hand, they weigh only about four to five ounces. Some give that the 'smallest primate' title to pygmy marmosets, the world's smallest monkey, while others swear that the mouse lemur is smaller.

But the tiny pygmy tarsier of central Sulawesi, Indonesia, thought to have died out early last century, was rediscovered about 15 years ago. 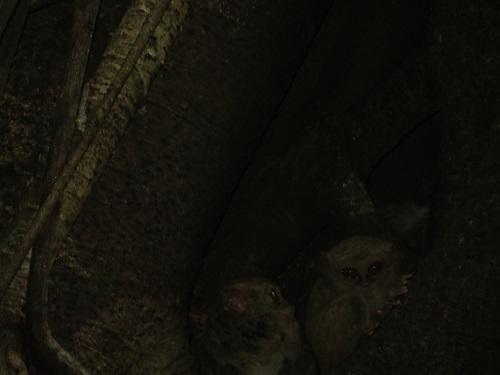 With a life span of up to 20 years, tarsiers are prosimians, like the lemurs of Madagascar, meaning they walked out on the common primate line that eventually produced monkeys, apes, and presumably Yours Truly and other self-proclaimed humans, some 45 million years ago.

As for those oh-so-enormous eyes in those oh-so-tiny heads, they measure five eighths of an inch, and if you look quickly, you'll think 'OMG, it's E.T.' In fact they're so big that tarsiers can't rotate them in their sockets, hence the ability to rotate their head almost as perfectly as Regan in the Exorcist. They also have large bat-like ears sticking out on either side. 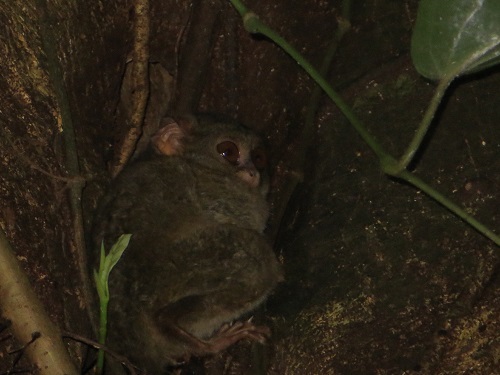 Judging by fossil records, they once hopped on the trees of mainland Asia, Europe, America and Africa, but you'll only find them today on just a few islands in Malaysia, Indonesia and the Philippines.

And now for a visit:

Ah, yes, where am I and why? At the very north-eastern tip of Sulawesi, along the sea shore under the densely forested slopes of Tangkoko volcano in the equally densely forested Tangkoko-Batuangas Dua Saudara National Reserve. A bit of a mouthful, but it's home to the tarsier. 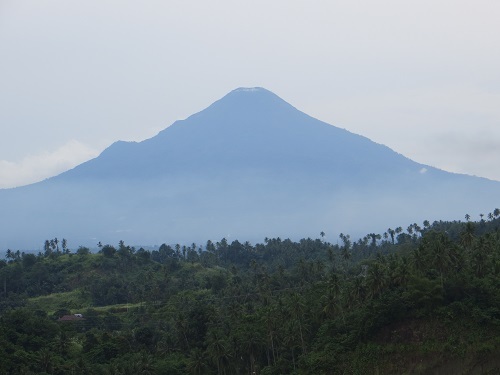 More precisely at this particular moment in time, despite all my enjoinments to my kids never, ever, to get on a motorbike unhelmetted, I'm perched on the back of a motor scooter as Mensul the guide rides roughshod over tree roots and slaloms through mud, my hair flying lushly in the wind, not a helmet in sight. Hati-hati, as they say in Indonesian - careful now! 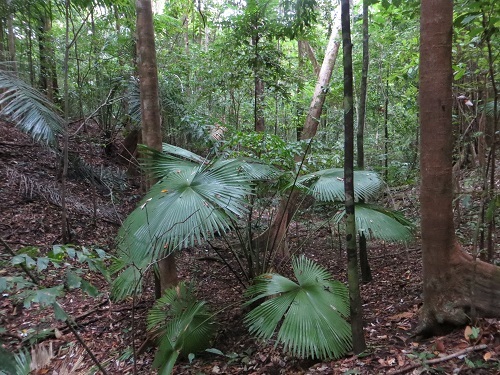 Notwithstanding, I arrive in one piece at the end of the track where Bobby, owner of my little rustic inn, is holding a birthday party for his seven-year-old daughter in a grove right on the sea shore, with lilting Indonesian music belting out of the loudspeakers he's set up. If that doesn't wake up the tarsiers, nothing will. 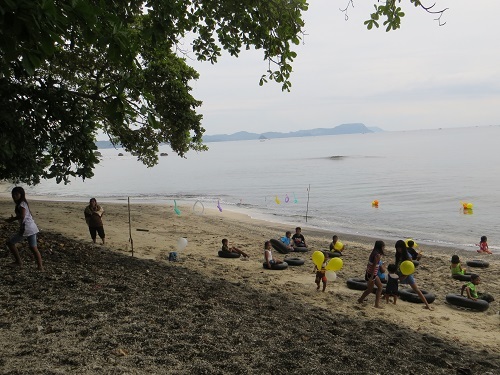 And now for the Right Royal Hunt. Even as we speak, I'm tripping over tree roots with Mensul and a dozen other tourists and guides, wandering round trees like idiots trying to spot the little nocturnal creature as it wakes up in its tree holes at dusk. 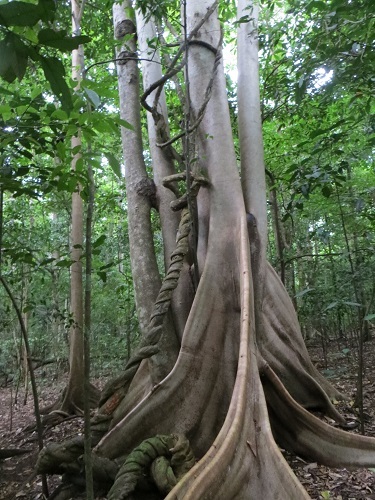 Everybody's doing an imbecilic ring-around-the-roses round one particular tree, beaming up their torches and red laser spotters into little cavities as the guides stick a particularly insect-laden leaf up on a pole by one of the holes. But there are no takers. We all troop off a few hundred yards in a dysfunctional column to another tree and perform the same inane ritual. 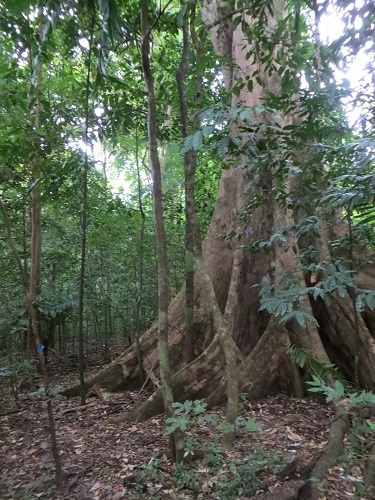 This time my usual luck breaks - which means we're in luck. Two large eyes glisten from the darkness of a cavity about 30 feet up. Then a little body emerges and plonks itself on a branch, looking down at us as if to ask: what are these idiot humans up to now? On the other side of the trunk another little critter scampers out and runs down a woven trellis of creepers and lianas. 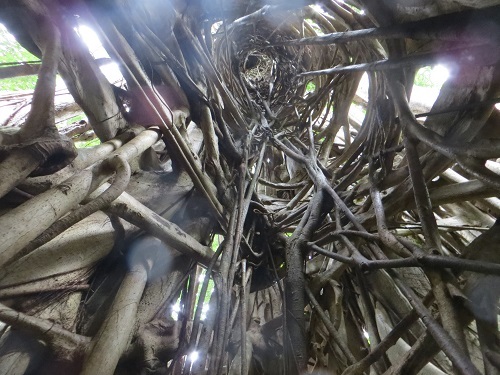 According to Lonely Planet, tarsiers communicate by something resembling high pitch singing. I tilt my lughole tree-wards but do not hear the likes of a high-pitched Adele. But at least I've seen them. Success at last. 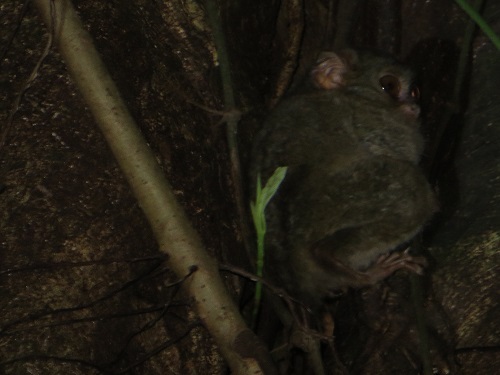 It's gone 10 a.m. next morning. The tarsiers should have long since tucked themselves up in bed as a myriad protruding roots in the dense vegetation eagerly wait to overthrow me in the jungle's clammy humidity. But here are three of them observing us from the porch of their hole in a tree. 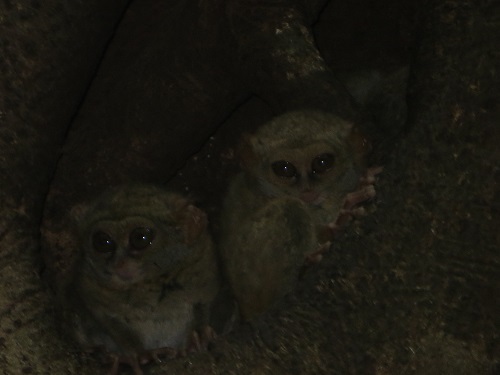 Out comes Mensul's cellphone, and out goes the message to a friend - yes, down the gulch, twelfth tree to the left past the broken coconut by the strangler fig. And up come another group of tarsier-lovers. 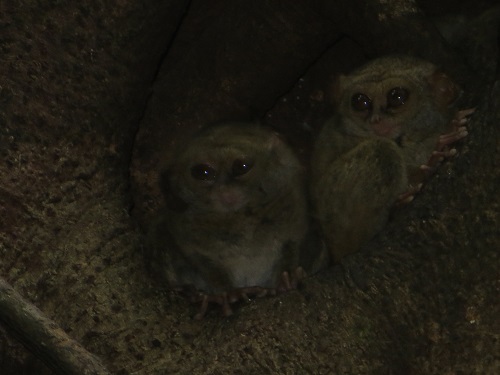 Now for some more facts: they have a top speed of 24 miles per hour and sup on insects, small frogs, lizards, birds, and sometimes poisonous snakes, holding dinner in their hands and chomping away with the strong jaws and teeth of their wide mouths.

They in turn are a fine buffet for cats, birds of prey and large snakes. But their greatest threat - yes, you've guessed it - is humankind, thanks to habitat loss, hunting, agricultural pollutants and other human disturbances, and they're listed as endangered, some of them critically so.

[Upcoming blog next Sunday: Animal Planet on the Looney Front - Jaws Other than the Great White Shark, Section 1: The Great Saltwater Crocodile] 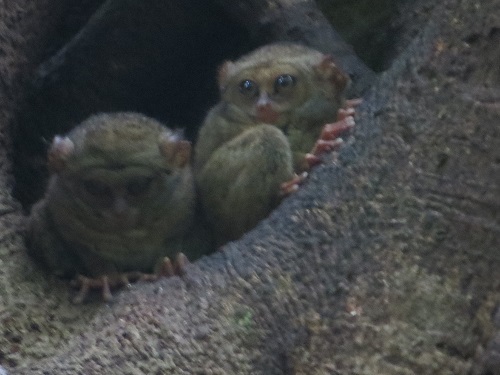