Is human curiosity killing the tarsier?

A tarsier has eyeballs the size of its brain, a head that can rotate 180 degrees, ears like a bat and is one of the world's smallest primates at just four inches tall, reports AFP. It's no wonder that tourists flock to see them.

This would be fine, except for another bizarre tarsier trait -- it can turn suicidal and bash its head in when under stress by tourists.

The animal is sensitive to daylight, noise, and physical contact. Carlito Pizarras, field manager at the Philippine Tarsier and Wildlife Sanctuary in Corella on the island of Bohol, tells AFP, "People go near and they're loud, or make a picture with the flash, or they're touching them. Most of those tarsiers, when they become stressed they commit suicide ... If you put them in a cage they want to go out. That's why they bump their heads on the cage, and it will crack because the cranium is so thin."

The tarsier is a major tourist attraction for Bohol, but the Philippine Tarsier Foundation reports there are just a few hundred animals left in the wild on the island. The foundation writes on their site that tarsiers should not be caged, as they are solitary animals, each requiring a hectare of space. While the government has banned hunting the animal, Pizarras says tarsiers are still caged for tourists, and AFP reports that in Manila, the Philippines' bustling capital, tarsiers are on the black market as pets.

Other tarsiers are even closer to extinction. According to the IUCN Red List, all listed animals are decreasing in population, and their status ranges from vulnerable to critically endangered. In 2008, a pygmy tarsier, believed to have been extinct, was found in Indonesia. Due to fragmented forests, moonlight allows predators to spot and catch the threatened nocturnal species. At the time of the discovery, the lead researcher told National Geographic, "[The] government needs to figure out a compromise between people and animals..."

The Siau Island Tarsier (Tarsius tumpara), listed as critically endangered on the IUCN Red List, lives on a small volcanic island, and, "This threat is exacerbated by a relatively large human population (311 people/km²) that has converted virtually all of the primary habitat to some form of human use (Shekelle and Salim 2009a, 2009b)," writes IUCN. The site adds that there are claims of the local population eating the tarsiers. National Geographic reports that islanders may have hunted up to 80 percent of the species over the last decade.

Tarsiers may be fun to look at, hunt and even eat, but humans' interest in the fascinating animal seems to be contributing to its demise.

Check out some photos of tarsiers below: 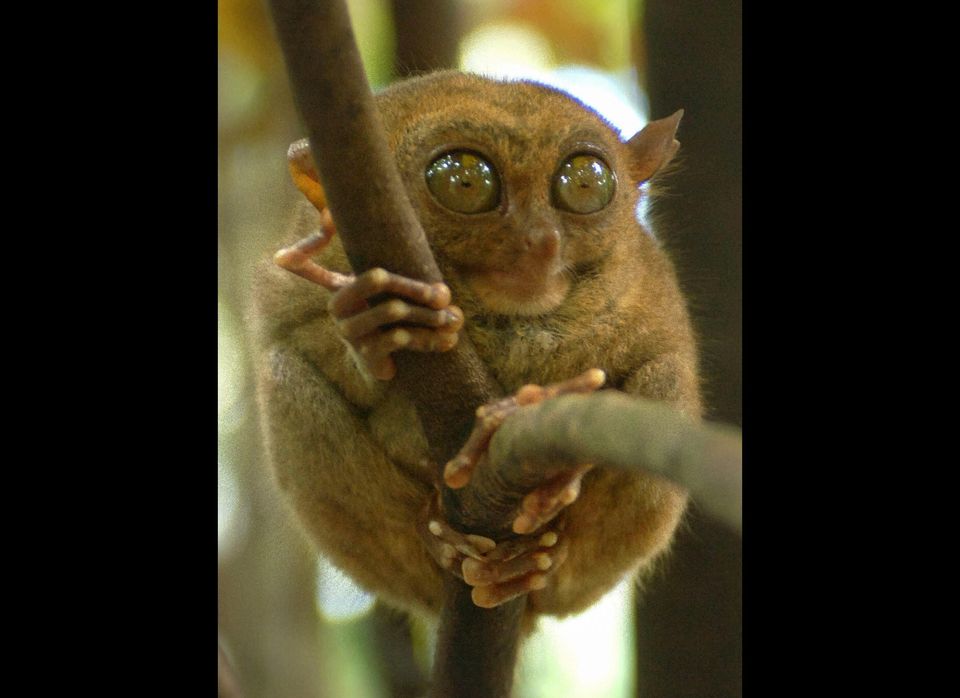 1 / 7
A Tarsier clings to a branch in a wildlife sanctuary in the central Philippine island of Bohol 20 January 2006. (JOEL NITO/AFP/Getty Images)
Getty