The indexical nature of the photographic image -- its ability to document and faithfully represent reality -- is one of the medium's most seductive characteristics. "Reality" is reflected through the lens onto a photosensitive paper and reproduced so that we can see what the artist saw, that moment the shutter opened. Of course, we know that the artist can mediate the image; she can manipulate our version of the truth in countless ways -- lighting, exposure, camera angle, diffusion, overt alteration, context and omission -- to construct a narrative that comports with artistic intent. Fundamentally, however, we believe what we see when we gaze upon a photograph.

Taryn Simon is a conceptual photographer whose documentary-style work is process-driven and layered. She often combines her large-scale pictures with adjacent panels of text, thereby interrupting the linear progression of visual stimulus and demanding a closer inspection of what is actually going on. Through five painstakingly researched projects spanning the past decade, Simon has established an artistic practice that has attracted the attention of curators around the world including the Whitney Museum, which mounted An American Index of the Hidden and Unfamiliar in 2007 and Tate Modern, which awarded the then-36-year-old artist a solo exhibition in 2011. Her most recent exhibition runs at the Berggruen Gallery in San Francisco through February 23rd, 2013.

Often investigating traditional American values of freedom and openness in government, the military, science and medicine as well as corollaries such as free trade and justice, among others, Simon explores notions of the American ideal in ways that are provocative without being didactic.

Her series, An American Index of the Hidden and Unfamiliar (2007), documents the vast, shadowy recesses of the military-industrial complex and its equally fascinating civilian counterpoints. The large-scale, richly saturated pictures (Simon uses a large format 4x5 Sinar camera) take the viewer from the Art Gallery of the Central Intelligence Agency to the Nuclear Waste Encapsulation Facility at Hanford Site in Washington State, where 1,936 radiation blue-glowing stainless steel capsules of cesium and strontium-90 are arrayed, a section of which Simon photographed that strangely resembles a map of the United States. 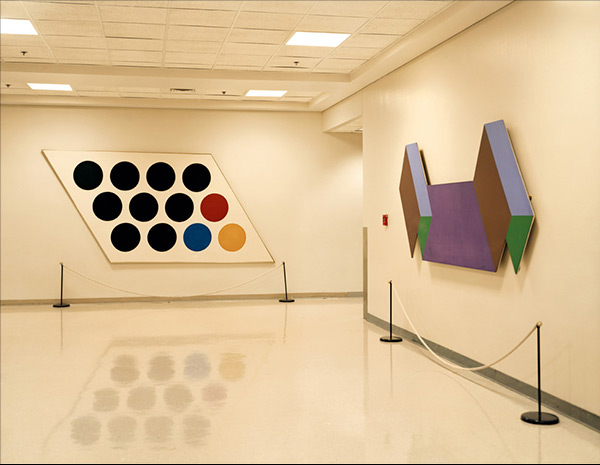 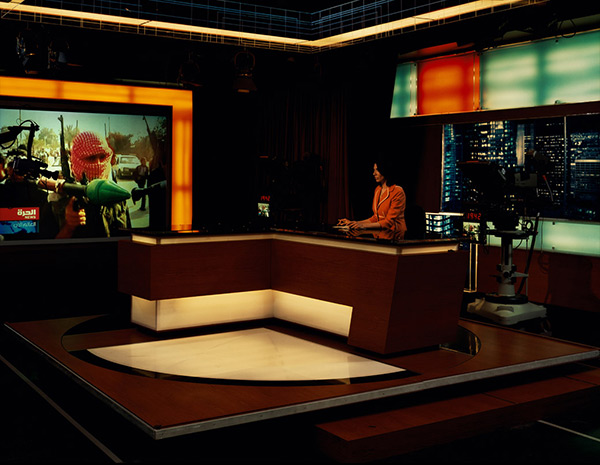 The constructed aspect of these pictures reveals only a part of the artist's process; each venue, shrouded in secrecy and mystery, required months of negotiation, back and forth, before access was granted. Tellingly, the only institution that denied Simon's request for entry was the Walt Disney Company which explained, without a hint of the ironic... "As you are aware, our Disney characters, parks and other valuable properties have become beloved by young and old alike, and with this comes a tremendous responsibility to protect their use and the protection we currently enjoy. Should we lapse in our vigilance, we run the risk of losing this protection and the Disney characters as we know and love them... Especially during these violent times, I personally believe that the magical spell cast on guests who visit our theme parks is particularly important to protect and helps to provide them with an important fantasy they can escape to."

In the American legal system, one is theoretically presumed innocent until proved guilty and our mythology around fair play makes most of us trust in the rectitude of the legal process. Over the years, however, growing police authority and a vast, powerful judicial infrastructure have combined to administer justice imperfectly.

In her project, The Innocents (2002), Simon raises the question whether our system of justice, in practice, adheres to these basic values. She researched men and women wrongfully convicted of violent crimes based largely on photographic evidence; for many witnesses, the photographic image replaced memory. The images document exonerated men at scenes related to their alleged crimes and serves as a powerful and moving critique of a criminal justice system that often relies on faulty recollection aided by photographic cues. 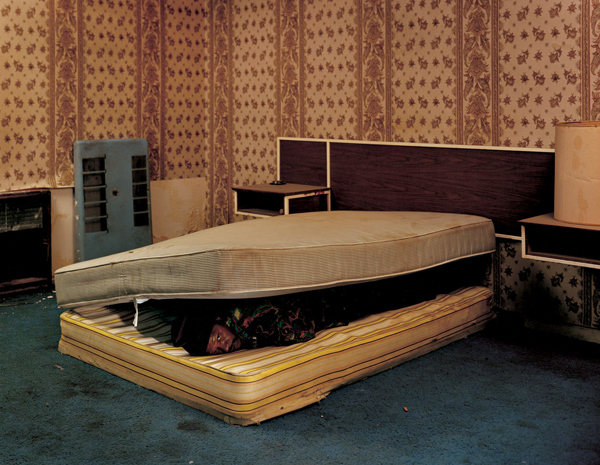 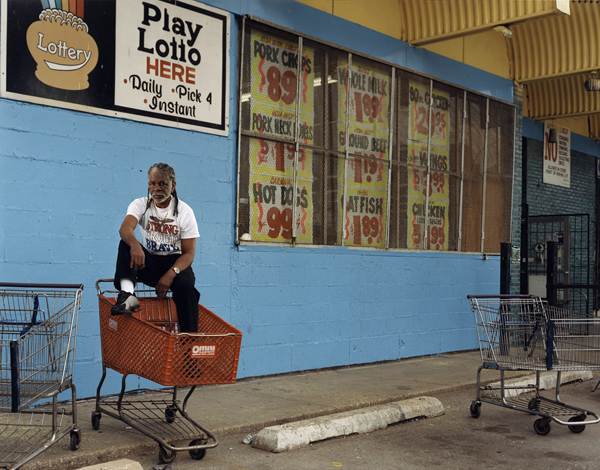 Contraband (2009), is an amazing documentation of goods -- real and counterfeit, legal and forbidden -- all seized over a four-day period at John F. Kennedy International airport prior to entering the United States. The 1,075 pictures, taken in November 2009, reflect the diverse influx of products and people seeking entry. The American ideal of openness and laissez-faire and the related mythology of the immigrant seeking a better life in America are slyly subverted. 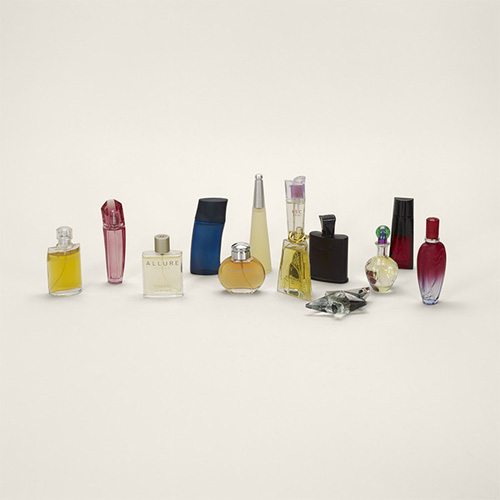 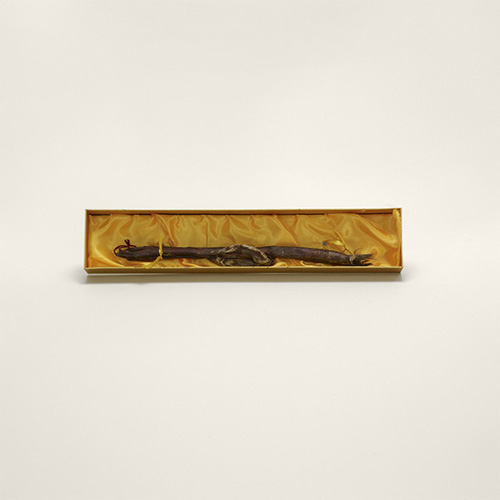 The title of the series A Living Man Declared Dead Chapters I - XVIII (2010) refers to an Indian man photographed by Simon whose relatives had gone to great lengths to have him declared legally dead so that his property rights could be taken. The systematically arranged pictures document bloodlines by tracing the living ascendants and descendants of a single individual. Blood relationships being an unalterable reality, Simon investigates how culture, circumstance, religion and geography combine to influence fate. Each chapter is presented in three panels; the photograph of the "source" character, aligned with their older and younger relations, a central text panel which constructs a narrative around the individual stories and a third panel providing "footnotes" or fragmentary pieces of text and/or photographic anecdotes relating to the chapter. The work explores issues of individual identity while revealing the myriad influence of politics, culture, religion and power. 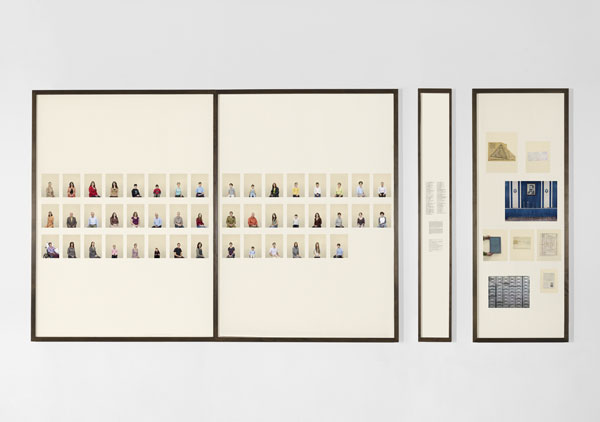 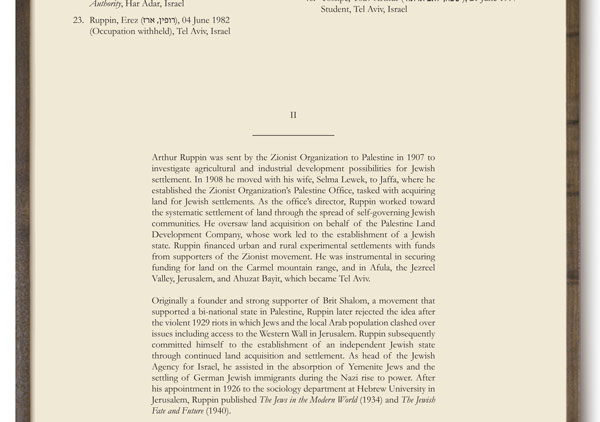 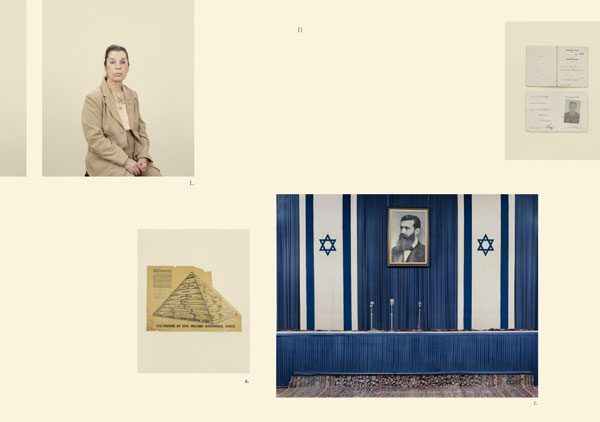 Taryn Simon's newest exhibition, The Picture Collection (2012) opened at the Berggruen Gallery in San Francisco on January 19th and runs through February 23rd. The series presents arrangements of pictures taken from the New York Public Library's massive collection of 1.2 million images. Organized under a complex system of over 12,000 subject headings ranging from the sensational (murder) to the banal (handshakes) and kept in folders, the NYPL archive represents a sort of analog search engine, one that has been utilized by artists, writers and advertising agencies for nearly a century. Like the Internet-powered search engines of today, an invisible hand (or algorithm) influences what is included or omitted from what most would perceive to be a neutral system of organization. 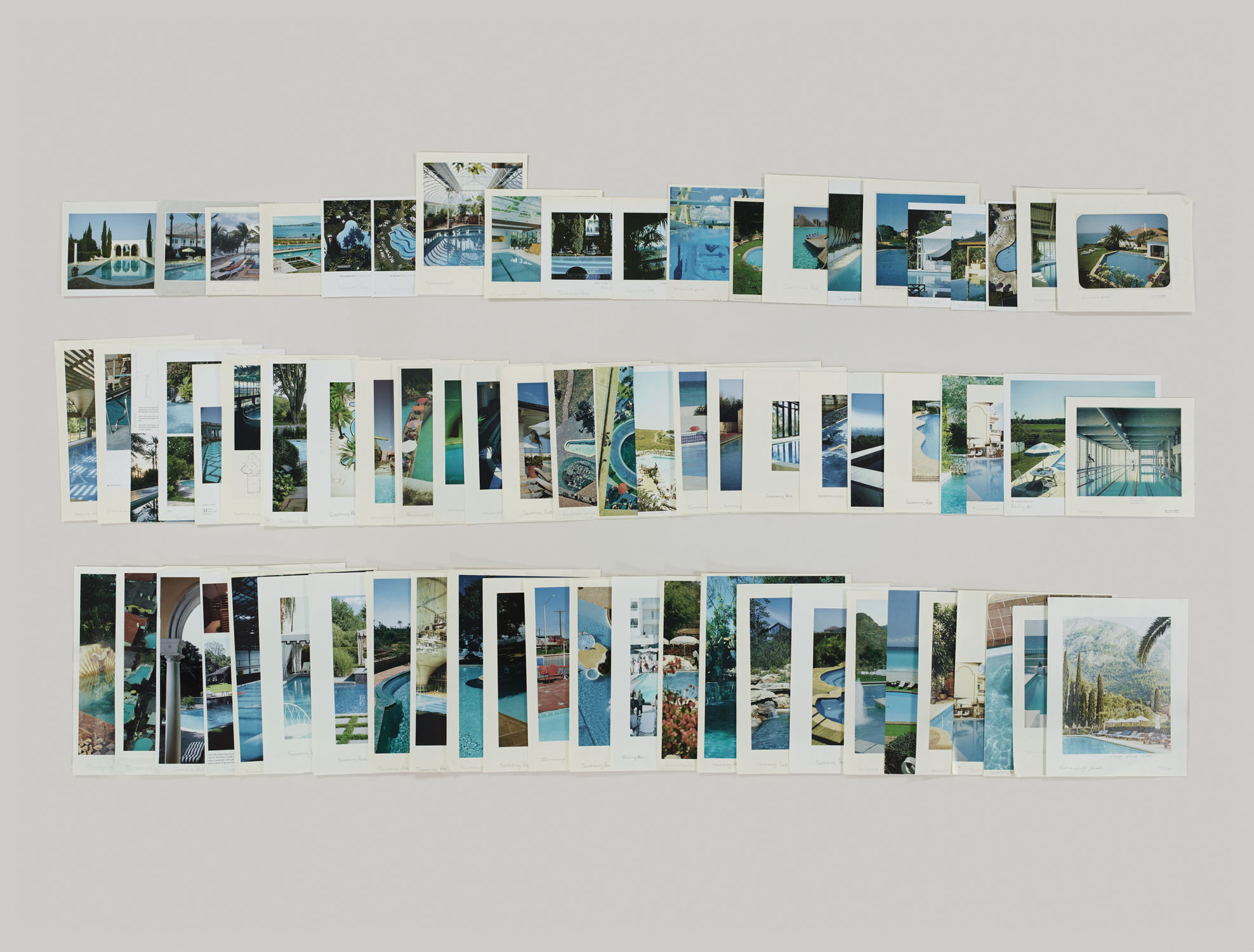 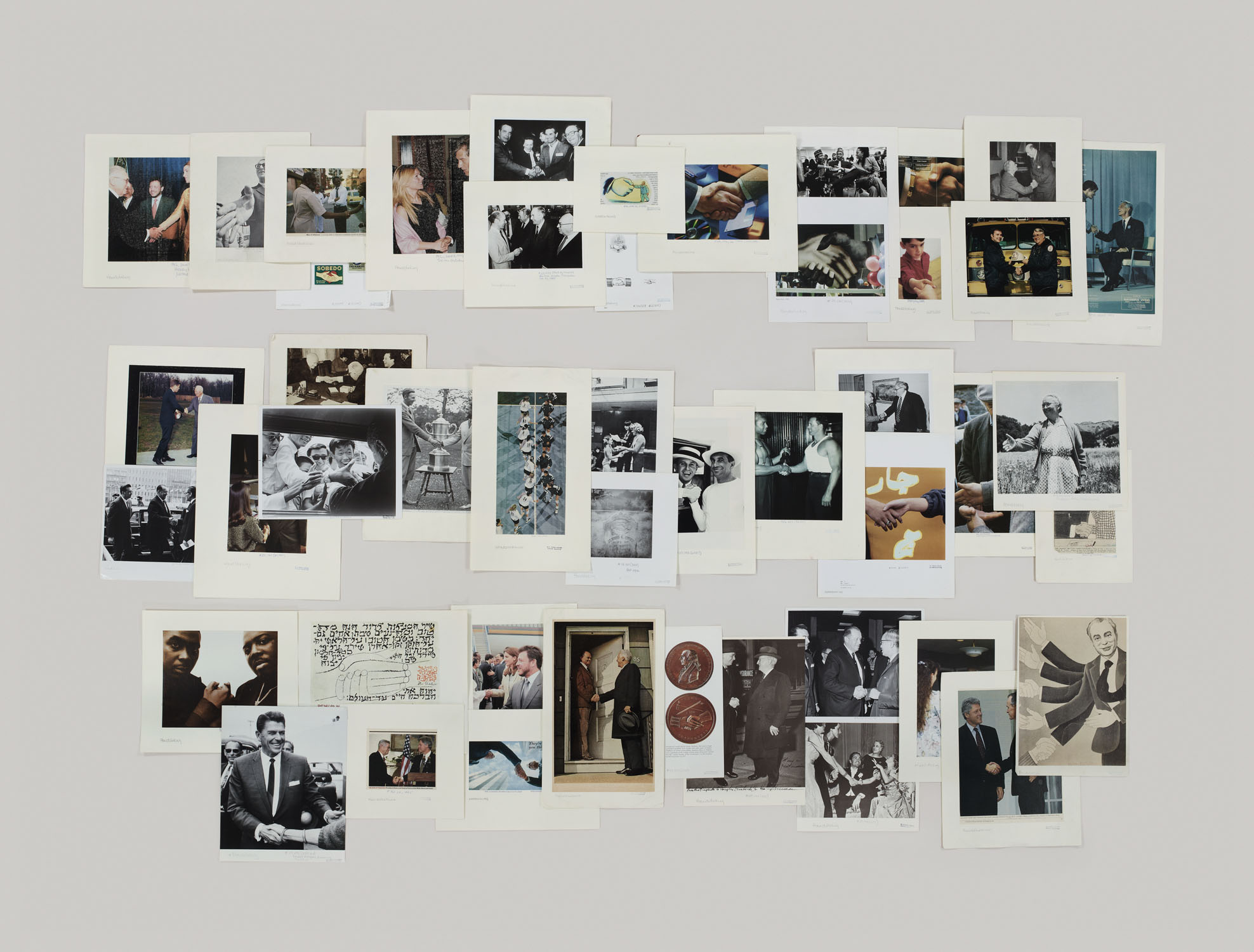 Simon's practice explores the space between the purported reality of the visual image as evidenced by the photograph and actual truth that the image represents and calls to mind the great photographer, Dorothea Lange who said in 1941:

"While there is perhaps a province in which the photograph can tell us nothing more than what we see with our own eyes, there is another in which it proves to us how little our eyes permit us to see."