This August, the community of Tarzana will be celebrating the "Tarzan Centennial," commemorating 100 years since the publication of author Edgar Rice Burroughs' famous novel about an English Viscount raised by apes, Tarzan of the Apes (1912).

Ever wondered why the citizens of early Tarzana (a community located on the west end of the San Fernando Valley, bordered by Encino to the east, the Santa Monica Mountains to the south, Reseda to the north and Woodland Hills to the West) named their community for a character in a novel about a feral child's life with apes? The name comes from Edgar Rice Burroughs himself. A few years after the publication of the novel (and its instant popularity), Burroughs purchased a 550-acre tract of land from General Harrison Gray Otis (early Los Angeles booster and publisher of the Los Angeles Times) where present-day Tarzana now exists, and established a ranch that he named after his most famous fictional character. Residents near and around the ranch also referred to the area as Tarzana. And when Burroughs sold his ranch, and development began, the name had already been established. 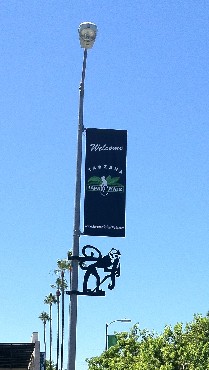 Over the years "Tarzanians" have embraced their community's interesting heritage, preserving it in a number of ways, keeping the connection to Burroughs and Tarzan alive. The stretch of road on Ventura Boulevard between Reseda and Burbank, for example, is called Safari Walk. The streetlight stands and garbage can holders along this stretch are decorated with metal cutouts of animals one would associate with Africa (an example is above). The local post office has a Tarzan display. Edgar Rice Burroughs, Inc., Burroughs' corporation, has been located here since the 1920s. And casual observers will notice other traces of jungle theme here and there, like the Tarzana Inn on Ventura Boulevard, with lions on its sign and giraffe topiaries out front. Even the Encino-Tarzana Branch Library has some African and jungle themed touches, from the landscape with elephant grass and aloes, to the sign on the front of the building imprinted with a savannah and jungle motif.

To commemorate this centennial, Tarzan and Burroughs-themed events are planned for the weekend of Friday, August 17 through Sunday, August 19. On Friday the 17th at 11:30 a.m. at the Tarzana Community & Cultural Center (19130 Ventura Blvd, ), the new Edgar Rice Burroughs Tarzan stamp will be unveiled. At 2:00 p.m. the same day, the Encino-Tarzana Branch (18231 Ventura Blvd at Nestle Avenue) will be screening Tarzan of the Apes (1932), starring Johnny Weismuller, the most famous of all the actors to portray the jungle man.

And while you are there, browse through the Edgar Rice Burroughs Special Collection, donated by Edgar Rice Burroughs, Inc., which includes Tarzan and its many sequels, and many of the John Carter series. On Saturday, from 11:30 a.m. to 1:00 p.m., also at the Encino-Tarzana Branch Library (18231 Ventura Blvd, 818-343-1983) will feature local historian and friend of the Burroughs family, Ralph J. Herman (whose family lived on part of the original Tarzana Ranch), who will give a talk about the Burroughs family, and the early days of Tarzana Ranch and the community (sponsored by the Friends of the Encino-Tarzana Branch Library). 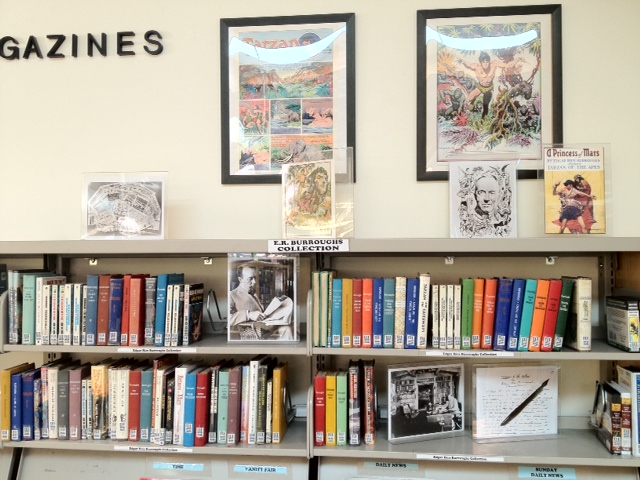 Back at the Tarzana Community & Cultural Center, on Saturday, the Tarzana Neighborhood Council and Woodland Hills-Tarzana Chamber of Commerce are sponsoring a Free Fun Day, from 1 p.m. to 5 p.m., with magicians, a petting zoo, a talent show, food trucks and games and prizes. Sunday looks like the big day for serious Tarzan enthusiasts. Sponsored by the Tarzana Improvement Association from 11 a.m. to 4 p.m., along Tarzana Safari Walk is the Tarzana Sidewalk Fair. At this event there will be a Tarzan & Jane Contest, African drumming, Tarzana Aikikai Demo, live parrots from Parrots Naturally, in Tarzana, exotic animals, balloon animal and face painting, a dance performance and local business and restaurant specials.

For Tarzan and Edgar Rice Burroughs fans, as well as Angelenos who want to learn something about early Los Angeles and San Fernando Valley history, these events should provide an interesting and fun weekend.