OK, this is not the great white shark of movie fame, just a random, by no means exhaustive, look at some of the many other toothy customers out there with whom you don't want to go mano a mano -- or rather, mano a dientes (unless of course you're a dentist, in which case you'll be in paradise).

The largest living crocodilian with a particular yen for human flesh; males generally reach 17 feet and 1,000 pounds, according to National Geographic, but specimens 23 feet long and weighing 2,200 pounds are not uncommon.

Its teeth, long and sharp, are set in jaws with one of the most powerful bites on Earth, and are endless. 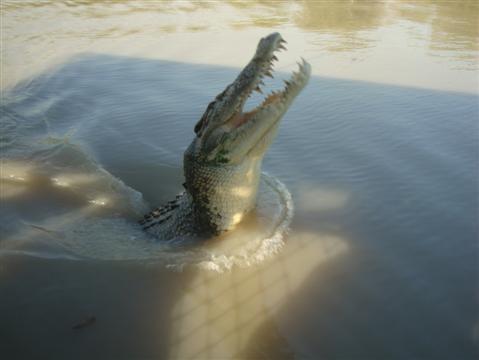 Now, that's a toothy smile
Although it only has about 70 visible at any given time, it has a small standby behind each, primed to grow and move into the front line for every tooth lost -- not just once, but 50 times during its life for some 3,500 teeth in all. Most disturbing for its prey but a dentist's delight. 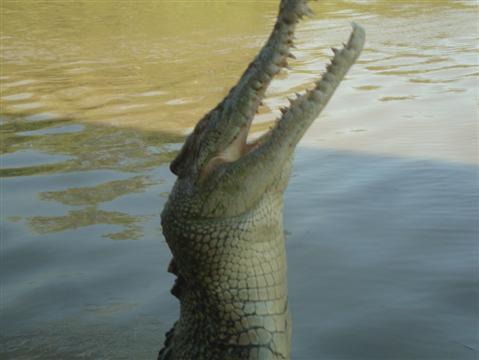 Say cheese
On the Adelaide River in Australia's Northern Territory, boatmen take you out and dangle pieces of meat over the side at the end of a rod to get the salties, as they call them, to jump up and snap at it with their teeth -- so that you can snap at them with your camera. There are no life vests on board. 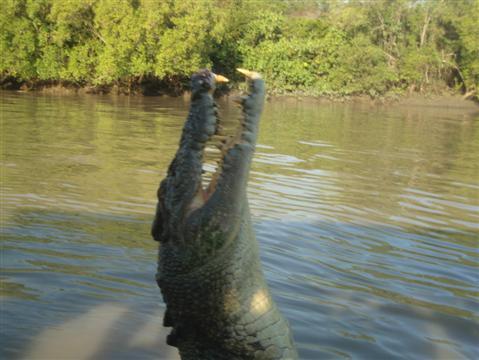 Encore
"No point, mate," quoths Patrick the boatman. "They'd be totally useless. A croc'll snap you up in nano-seconds if you fall in, life vest and all." 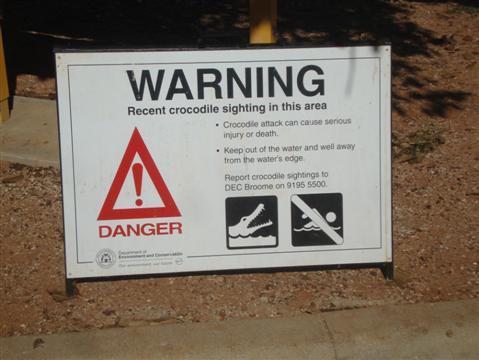 Croc warnings abound all over the country

At the other end of the size scale, this critter is only about as big as a small dog, some two feet long and weighing 18 pounds, but it's the largest carnivorous marsupial.

It has very powerful jaws with menacing teeth, and it's not a great idea to get your hand sandwiched between them. 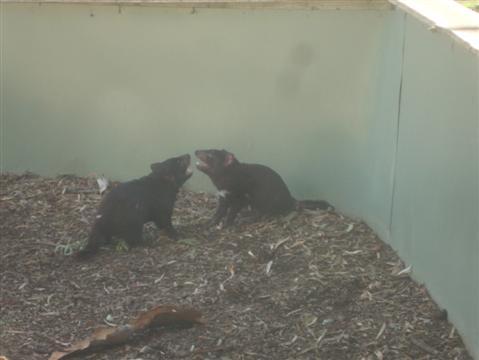 You back off!
You're unlikely to get a good view of them in the wild where they're threatened not only by human encroachment but by a new form of facial tumours. Your best bet is a sanctuary, like Bonorong on Tasmania's east coast.

They certainly live up to the snarling bad temper of Taz, their Looney Tunes cartoon film counterpart. A keeper gives meat to a female. Another female approaches, and the grand aria begins. You've never heard such high-screech growling and snarling. It almost outdoes the House of Commons at question time. 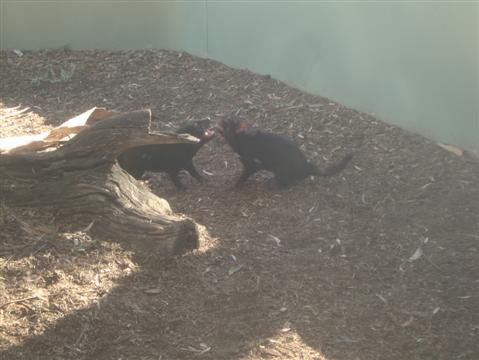 I told you to skedaddle
Their pinkish mouths open, they bare their teeth and they're doing a proper in-your-face thing. Their mouths touch but, most interestingly, they're mock-biting. It must be the animal equivalent of TV wrestling. 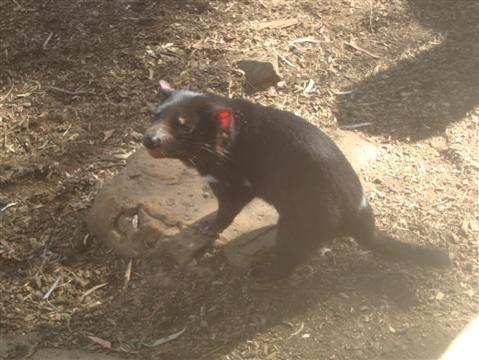 Largest of all seals, with males measuring more than 20 feet and weighing over 3.5 tons. 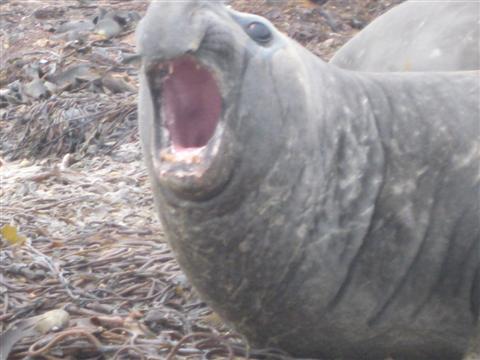 I'm not just yawning - I'm warning
They get their name from the male's flappy, fleshy nose which he can blow into and inflate to an elongated balloon-like appendage, vaguely resembling a trunk. 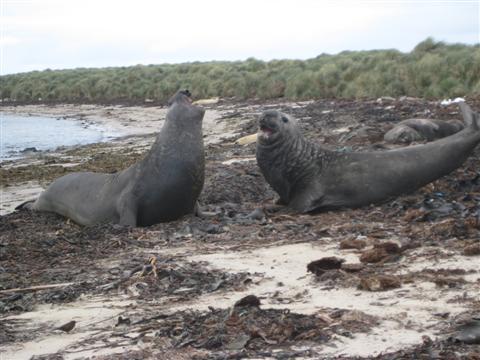 I told you to piss off
They have prominent canine teeth while the rest are flat, but be they flat or sharp, when they open those huge maws of their, you don't want to tangle with either. They inhabit the Antarctic and sub-Antarctic including the Falklands where Yours Truly is carrying out an inspection parade on the far northwest beach of Carcass Island. 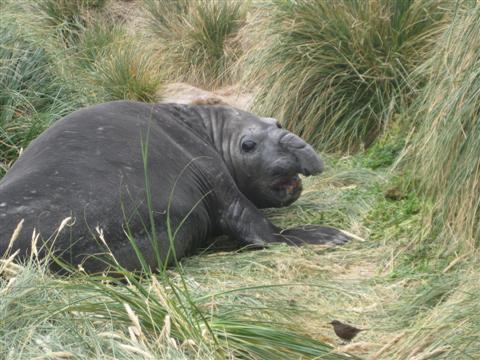 Time out
The males rear up on their torsos against challengers, lording it over territorial harems of dozens of females, opening their huge pink mouths, swaying forward and lunging, then swaying back again, belching and snorting, inflated noses filled with snot, harrumphing, farting in all keys, major and minor, flat and sharp, letting off many fruitful odours, all systems go. 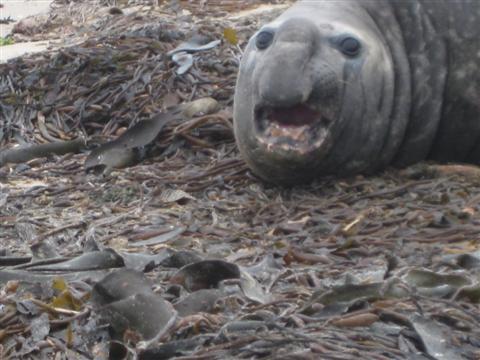 Don't start again
It's a symphony of sounds, sights and smells that immediately recalls a board meeting of your favourite company or organisation (fill in the blank). 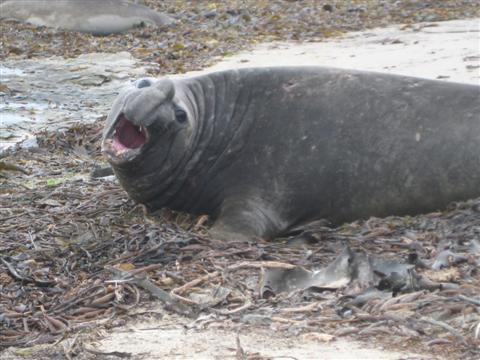 You had better take me seriously

This carnivore, about the size of a medium dog, has a low-slung chassis; its forelegs are much higher than its hind legs, resulting in a short back and torso that slopes downwards.

They have large flesh-shearing incisor and canine teeth and super-potent jaws with an awesome bite, though not as potent and awesome in pound for pound ratio as Taz. They live in large packs or clans of up to 80 led by females. 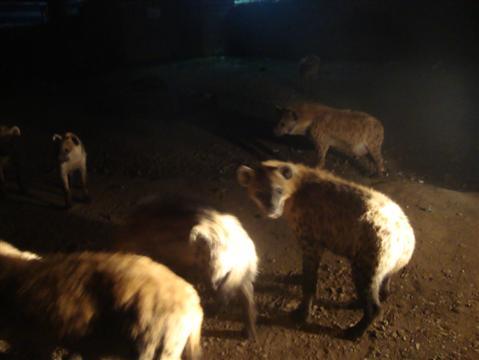 Prowling hyenas in Harar at night
These scavengers sup on leftovers from other predators and NatGeo says the Maasai of Kenya and Tanzania leave their dead to be consumed by hyenas. But this does not preclude them from having a go at live deer, cattle and sometimes humans. Some years ago a pack killed a 13-year-old American tourist in Botswana's Okavango Delta.

In the ancient Ethiopian city of Harar several low cubbyhole "gates" were built into the town walls by its founder to let scavenger hyenas enter and clean up the refuse every night. 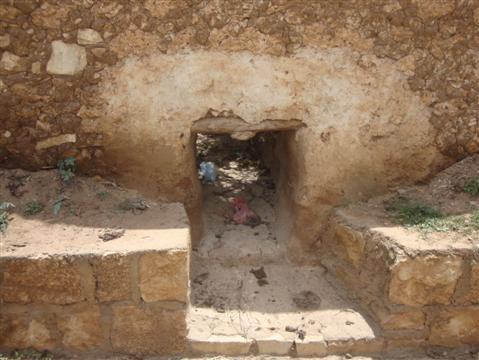 Cubbyhole gate founders built into Harar's walls for hyenas to scavenge
Today, in a centuries-old tradition, men feed them every night - it's considered good luck to do so - draping bits of meat around sticks or dribbling it from his mouth and pocketting tips from gaping tourists. 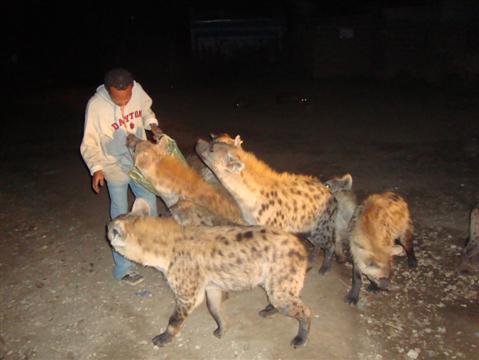 Mouth-feeding the hyenas
Harar's pack is said to be pretty docile, spending the day sleeping in nearby caves and turning up for their regular evening supper. 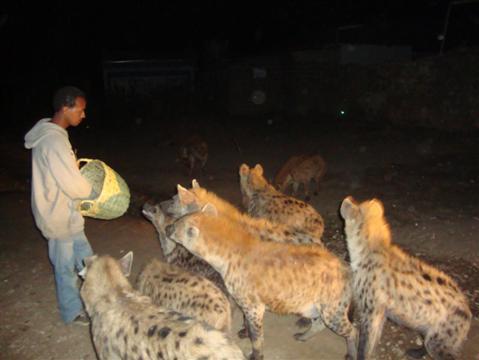 Give us more
And yes, laughing hyenas really do sound like the maniacal guffaws you get at an executive board meeting of your favorite company or organization -- or in the House of Commons. 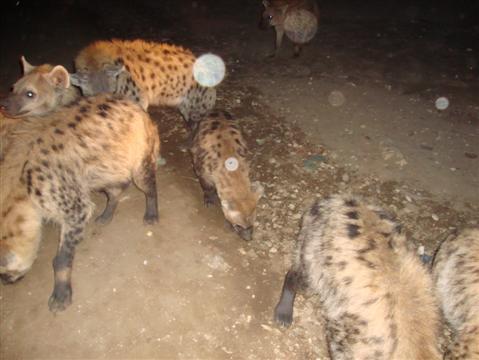 Getting ready for the board meeting

This customer sports a trendy spikey tomahawk above a long faces, and lopes around in large clans on the Indonesian island of Sulawesi (Celebes). Their bodies are up to two feet long and they can weigh over 20 pounds. 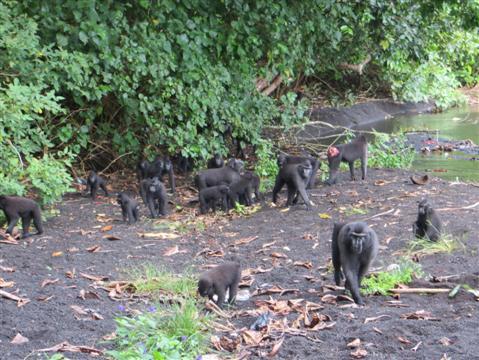 Here they come
They have huge canine teeth, hairless red arses (ah yes, we're back to the board meeting and the House of Commons again), sturdy shoulders, and they look somewhat like baboons. You certainly don't want to get those canines embedded in your hand. 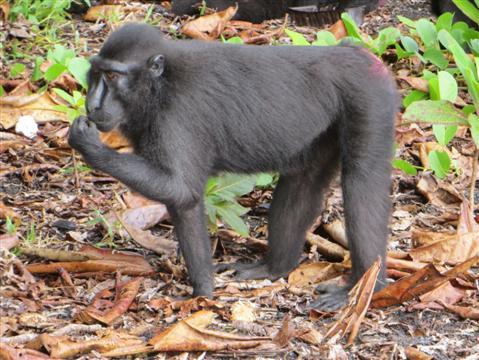 Now let me think
But they're not aggressive, in fact much less so than the tourists who at this very moment are in warlike mode on a beach in northern Sulawesi as they jostle for positions to set up cameras with escalating lenses larger than the Hubble space telescope. 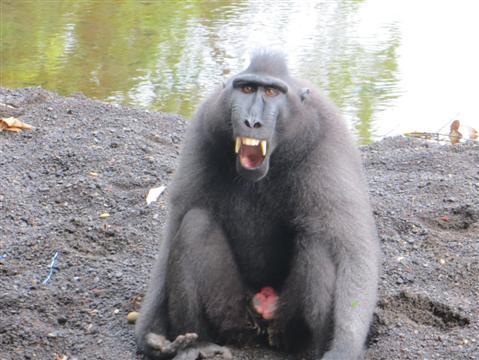 I don't need no dentist
A macaque sits right in front of Yours Truly and shows off his enormous canines -- and something else besides. Wow, is he sexually aroused? 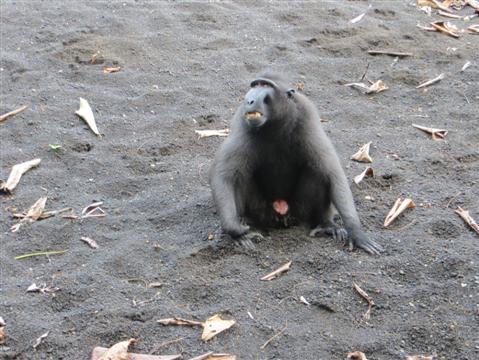 Look at my tomahawk instead
Komodo Dragon

The largest of the lizards, this character can measure 10 feet and weigh up to 300 pounds. They're only found in Indonesia's Lesser Sunda Islands of Komodo, Rinca, and the west coast of Flores. 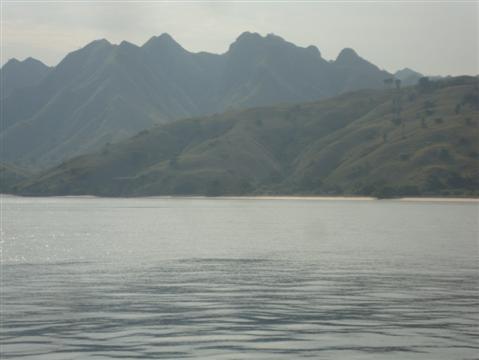 Komodo Island
They'll eat any flesh that comes their way when hungry, including humans, rearing up on their hind paws and tearing away with sharp claws and razor teeth. If you don't die from the bite, you'll succumb to the poison of their bacteria-laden saliva. 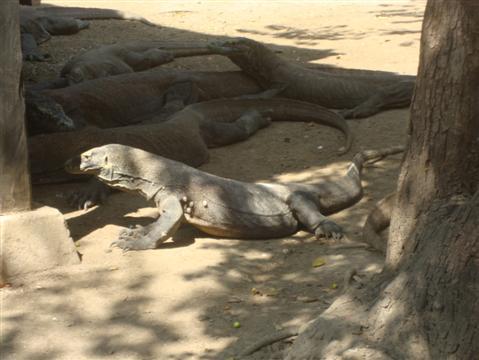 A somnolent group of dragons
I'm cheating here, as I don't have any pictures of their gaping maws. On both Rinca and Komodo they appear remarkably lethargic, having had their fill of deer, pigs and water buffalo who live here in non-peaceful coexistence. 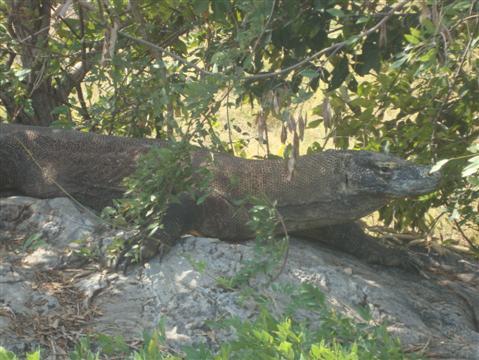 At rest but watchful
The guide, Mansur, carries a frail-looking forked stick, our only defence if a dragon turns aggressive. It will supposedly pin the beast's narrow neck to the ground.

Yours Truly is standing under a tree, forked pole in hand, as Mansur goes a-scouting for dragon. A lot of good this is going to do me if one of them suddenly emerges, grandstanding on its hind legs and tail, lashing out with claws and teeth. Have it thee, base varlet, I'll quoth, fencing like a Shakespearean actor with fork against claws. 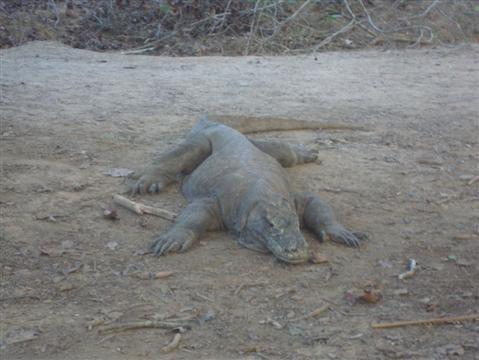 I can see you
Talk about Puff the Magic Dragon! But none puffs along. Instead Mansur is gesturing obscenely from a rock 100 yards away. I take myself towards him, fork and all. There beneath a branch is the grey face and brown body of a 10-foot male. He blinks, then turns his snout nonchalantly towards me. At least I hope it's nonchalantly. 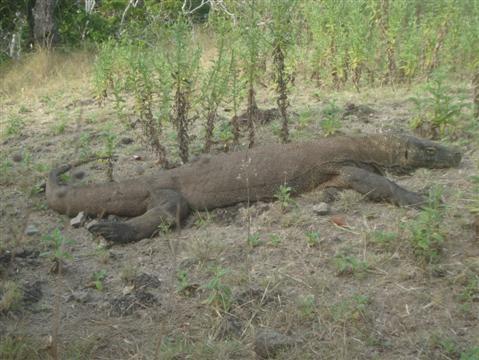 I've still got my eye on you