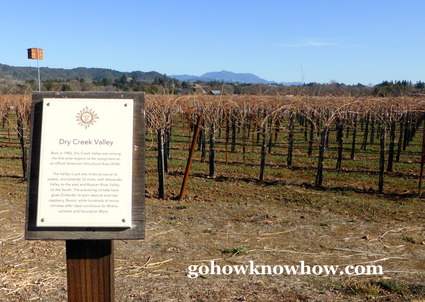 Don't ask me how, but the more wine I had, the more furious I pedaled until by the end of our 20 mile tour of the vineyards of Healdsburg, California, I think I burned off all the calories consumed at the three wineries I visited, including the salted peanut butter cup and the double chocolate cake, about which, more later.

Well, that's my story, anyway, and I'm sticking to it.

The Dry Creek Valley, about 90 minutes drive north from San Francisco, features gentle hills, nothing too strenuous, and there wasn't much traffic after we made the short trip through town. I was riding with the guidance of Terry Holcomb of Wine Country Bikes. A former government worker, Terry ("Call me Tac,") retired a few years ago to pursue his passions: bike riding and wine tasting and grandchildren. I was happy to join him on the first two, and ooh and aah at the photos of the third, which he proudly displayed on his iPhone as we sat in the shade of a tree during one of our stops. 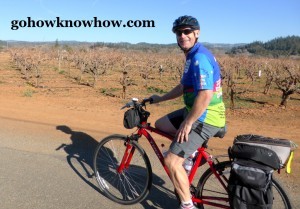 Because the weather in the Valley is moderately warm and dry all year round, touring by bike is a four season activity here. Less than a half a mile from the downtown area, where tourists come for the abundant gourmet restaurants and specialty shops, we started up a farm road where bird chatter was the loudest sound we heard, and vineyards stretched in all directions. This was January, so there was no fruit to be seen. The vines, some trimmed to nubs and others allowed to keep their skinny green shoots, lent a peculiar beauty to the landscape.

Wineries in this region produce Sauvignon Blanc, Chardonnay and, of course, California's signature grape, Zinfandel is also grown here. Across the acres of pruned vines we'd catch the sight of the gnarly old vines that are especially treasured when they are more than a few decades old.

By 11 or so, the sun had risen in a cloudless sky and the morning chill was long gone. Arriving at the Bella Vineyard and Wine Caves, I was more than ready to duck inside the 61-degree, hillside, earthen cave that is the tasting room, wine cellar and event space. While Devin Moore poured, Tac explained if one wine was especially appealing, I could get another serving by saying I wanted to "revisit" that particular wine. Needless to say, I did a lot of revisiting during the day. 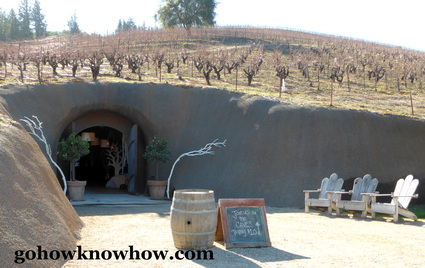 Despite Tac's giving away the secrets of the cellar, Devin must have liked him, or me, because before we left, he pulled out salted peanut butter cups and urged us to eat them with the Bella's 2012 Late Harvest Zinfandel. The richness of the candy, the tangy contrast of the salt and the slightly syrupy, plummy, spicy dessert wine mixed well in the mouth, and the flavors stayed with me as I wandered through the side rooms of the cellar and headed out to the vineyard's picnic area for a brief rest.

Wine tasting can be exhausting, but Tac didn't linger for long. We needed to move on, Quivira Vineyards was four and a half miles away along the Dry Creek Road, and we had plans to lunch there.

Knowing that Quivira is biodynamic, engaging a form of farming that is rigidly back-to-basics (and can appear to those unfamiliar with some of the practices to be a little bit wacky) I was prepared for the unexpected. But I was not prepared to be greeted by marketing manager Andrew Fegelman, with a "I know you from Chicago," but he did.

Fegelman took grip of his senses in 2006, leaving frigid Chicago behind for Sonoma. But during the eighties, both of us practiced journalism in one of the coldest places I have ever lived, and it was good to trade stories of people we knew and experiences we shared in the Windy City. This strolling down memory lane did not interfere with a tour around the farm to take in the vegetable garden, the Heritage chickens and the area where the cow horns are buried. (Don't ask, I told you some of this is wacky!)

Then we parked ourselves at an outdoor table to try the fruit of these biodynamic efforts accompanied by sandwiches on focaccia bread and a salad that Tac had thoughtfully provided. Sure, we already had our dessert at Bella but that didn't stop Tac from pulling out a chocolate cake. That prompted Andrew to bring out a bottle of Flight, a single vintage Zin, to go with it. You can see where this is heading. 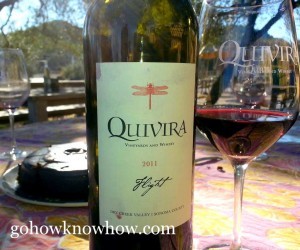 And you can see why I was determined to pedal more furiously to our next destination, the 42-year old, family run, mariner-themed Dry Creek Vineyards, just two short miles away. The women in the tasting room were delightfully hospitable. From their inquiries about our ride and the bike-related gear they had for sale in the shop, I concluded this was a very bike-friendly winery. And it was a fitting last stop because it was tucked off the main road on the other side of the beautiful Lambert Bridge. By stopping on the bridge to take in the view, I could appreciate the Dry Creek that lends its name to wineries, shops and restaurants in the area and indeed, this whole, beautiful valley. 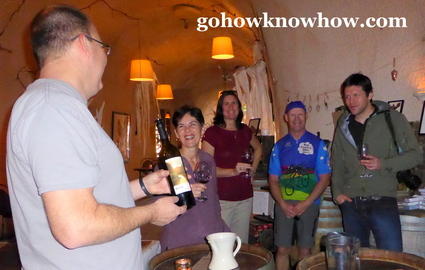 You can do a Sonoma wine tour in a car, heck you can do it by Segway. There are more than 100 vineyards in Healdsburg alone. But by taking a bike with Tac as my guide, I'm certain I paid more attention to the sight of the creek and the sound of the bird song and the feel of the sunshine, all of which enhanced more than any cake or candy, the taste of the wine. 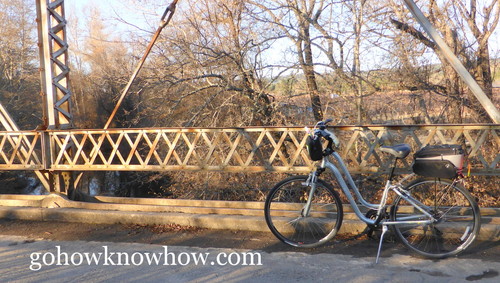