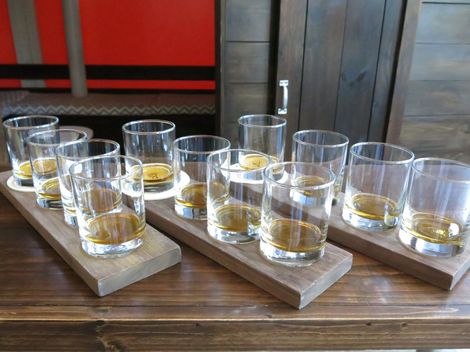 After reading an advance copy of Whisky Advocate managing editor Lew Bryson's new book Tasting Whiskey, out this November, I wanted to learn more about tasting whiskey. To accomplish this I brought together Don Lindgren, owner of Rabelais Books (one of the world's premiere culinary bookstores) and award-winning bartender John Myers for a comparative tasting of whiskey led by the knowledgeable Andrew Volk. We convened in Volk's rustic meets modern watering hole the Portland Hunt & Alpine Club in downtown Portland, Maine.

According to Bryson, when organizing a whiskey tasting, you want a quiet place with few distractions. At Volk's popular establishment there is no shortage of whiskey or talent behind the bar, and at 11:00 a.m. on a Saturday one can find quiet.

The set up Bryson recommends, should include a vertical white background (something as simple he says as a plain piece of paper), glasses of water (for sipping between tastes and/or diluting the whiskey with), something plain to chew on (we used oyster crackers), and something to take tasting notes (we used index cards). For the whiskey, Volk provided clear glasses not too short not too wide - just as Bryson recommends.

What we were tasting was not revealed until we had all finished sampling each whiskey. In between tasting each whiskey we compared notes - first color, then smell, how it registered in our mouth - the texture and finally, flavor. Volk, who stood across from me during the tasting, was my primary educator. He instructed me to keep my mouth open when smelling, to hold the glass up against one of the white paper napkins to truly see the color, and to take several sips as the flavor set in.

We sampled four bourbons (Jim Beam Black, Four Roses Small Batch, Old Fitzgerald, and WL Weller Special Reserve) and one Tennessee whiskey (George Dickel No 12). Of the five, my favorite ended up being the Jim Beam Black (described by Volk as being gold, with an aroma of honeyed wheat, a light body and honey and vanilla, and medium length finish).

As the least experienced of the bunch I thought I would be a little intimidated, but instead I found the tasting a lot of fun and enlightening. Volk took some extra time to share a bit of his whiskey tasting wisdom.

How did you pick the whiskeys we tasted?

"I wanted to pick several whiskeys that were all in the same category, but significantly different within that category.

We drank only bourbons, but they varied in their mash bill age and finishing process.

The mash bill (initial composition) for the Beam and Dickel are traditional bourbon (high corn content), the Four Roses and the Old Fitz are both high-rye content bourbons and the Weller is a high-wheat. Just as a reminder, that means the other 49% is skewed toward different grains (because 51% MUST be corn).

The Old Fitzgerald sees significantly more time in oak barrels than the other bourbons.
And the Dickel receives the additional finishing step of the Lincoln County Process, which is to say charcoal filtering."

What is the best piece of advice someone ever gave you regarding tasting spirits?

"Once you learn the basics of tasting, the best thing to keep in mind is to trust your palette and don't get so caught up in trying to figure out what you're drinking that you don't enjoy it."

What whiskey do you drink in your "off" hours?

"I'm all over the board in my personal taste; for me drinking is about mood. In the winter or after a long meal, I love sipping the peaty, smoky Scotches. But on a warm summer day I'm much more inclined to grab a bourbon and lemonade or a Irish whiskey.

That said, I'm a sucker for a classically-made Old Fashioned. Recently I've found myself grabbing for the no-nonsense Old Grand Dad Bonded, 100 proof bourbon for my Old Fashioned." 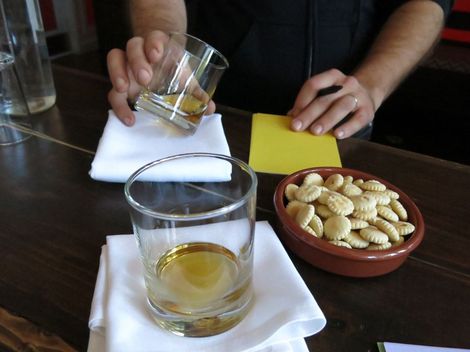