For some, a vacation offers the perfect opportunity to get out of the kitchen and let someone else prepare your meals. But for the foodies and apprentice chefs among us, a few days away provides a prime opportunity to pick up a few cooking skills and shake the feeling that you're an amateur in your own kitchen. After all, learning how to craft fresh pasta in Rome or dig for oysters in South Carolina outlasts any souvenir in your scrapbook, not to mention it's a great way to experience a new culture.

With that in mind, U.S. News Travel has rounded up a list of the best cooking vacations. From New Orleans to Paris, these epicurean hotspots feature all the key ingredients necessary to appease your taste buds, with cooking classes, tours and, of course, memorable gourmet meals. One whiff of these dishes and you're sure to feel inspired to book your next culinary escape. 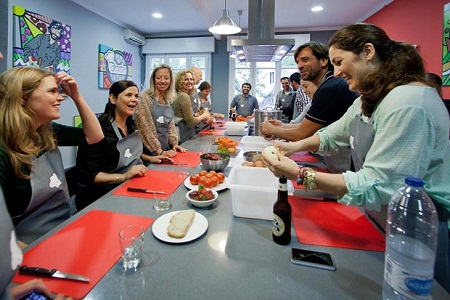 After one lap around the lively Mercat de Sant Josep de la Boqueria, you'll likely wish you had access to a kitchen where your culinary dreams could run wild. Barcelona Cooking provides the perfect space for learning to cook like a local. Here, you'll learn how to prepare a four-course meal, including multiple tapas dishes, paella, other popular entrees like Pulpo a Feira (Galician-style octopus) and a dessert. If you'd rather focus on appetizers, Barcelona Cooking also offers a tapas class that teaches enthusiasts how to make variations like baby peas with Catalan sausage and seared bay scallops with iberico ham. While you cook, you can sip on glasses of the school's very own Tempranillo and Albariño vino, crafted by winemakers from the Rioja region. To see how locals shop their way through Boqueria Market, consider signing up for a morning class, which starts off with a tour through the shopping plaza.

The distinct Creole and Cajun flavors of the Big Easy can be difficult to imitate at home without the know-how and proper spices. The New Orleans School of Cooking offers both with its demonstration classes and general store. Courses are taught by local chefs who specialize in the art of Bayou cuisine, with an emphasis on gumbo, jambalaya and pralines, among other NOLA staples. In the hands-on cooking classes, you and at least seven other culinarians-in-training prepare (and eat) a dinner featuring dishes like chicken and andouille sausage gumbo, fish or chicken à la meunière and pralines. Menus vary by class and time, so check the school's website to see which tutorials tempt your palate. After class, pop into the on-site general store and pick up some of the spices you cooked with or just admire the building's interesting structure, a converted 19th-century molasses warehouse. You'll find the New Orleans School of Cooking in the French Quarter, less than a mile northeast of the city center.

If you've ever harbored an urge to create the dishes featured in Julia Child's Mastering the Art of French Cooking, La Cuisine Paris may provide an extra jolt of inspiration. Classes, which are offered in English and range from two- to four-hour sessions, teach everything from croissant-making to French cheese-tasting. If you would prefer to get out of the classroom, sign up for the French Market Tour and Cooking Class. This four-hour course begins at one of Paris' famed open-air markets (Marché Maubert in the morning and Marché Baudoyer in the evening) where your group and a chef choose ingredients for a dish that will be prepared back at the school (La Cuisine Paris buys all the ingredients for the group). After perusing the market, you and your fellow sous-chefs will return to the school, where each student will craft a different item on the menu. You'll end the class noshing on the meal you made while sipping a glass of wine. La Cuisine Paris sits next to the Hôtel de Ville, along the Seine in the 4ème arrondissement (4th district).

After you whet your appetite with a tour through the Chatuchak Weekend Market, head to Bangkok's Chatuchak district to the Baipai Thai Cooking School (about 12 miles northeast of the Bangkok city center). The four-hour classes here are taught in English on the first level of a two-story house. During the course you'll learn traditional and practical Thai cooking techniques, along with tips on how to reproduce the menu at home with ingredients available at your local supermarket. Each class uses a set menu, but dish options vary by time and day, so check the school's website for the schedule and choose a menu that appeals to you. A typical evening menu includes spring rolls, pomelo salad, chicken and galangal in coconut milk soup and panang curry with chicken (there are also menus for vegetarian preferences).

Recreating London's pub culture is a little difficult without its quintessential tavern atmosphere, but thanks to L'atelier des Chefs, you can create your own pub grub. At this London school, which boasts two locations in Oxford Circus and St. Paul's, you can sign up for gastropub cooking classes. Courses are quick 30-, 60- or 90-minute tutorials that teach how to craft popular recipes like lamb neck with minted peas and creme fraiche or pork tenderloin with creamed cabbage. For something a little lighter, but equally English, take the Afternoon Tea class, where you'll learn how to prepare bruschetta and homemade soda bread sandwiches along with sweet-tooth favorites like macaroons, buttery scones and chocolate truffles.

Bluffton, S.C.
The Inn at Palmetto Bluff, An Auberge Resort

There's no need to hop across the pond for an unforgettable cooking vacation. The Inn at Palmetto Bluff in Bluffton, S.C., takes guests along a tasty tour of Lowcountry cuisine. If you're here in November, don't miss the weeklong Music to Your Mouth Festival. With the help of several of the region's best chefs, sommeliers and musicians, the inn presents a wealth of activities that spotlight some of the South's best fare. The festivities for this year's event include oyster roasts, river cruises, cook-offs between renowned Southern chefs (guests choose the victor) and classes that spotlight the farms and foods from neighboring North Carolina and Georgia. The Inn at Palmetto Bluff also provides a bevy of culinary programs throughout the year, including Auberge Adventures, where guests spend the day shrimping, crabbing or digging for oysters and learn how to prepare their catch with one of the inn's chefs.

A trip to NYC is a tour de cuisine in itself, but New Yorkers aren't necessarily known for their kitchen prowess. And who could blame them? With the sheer number of award-winning venues at their fingertips, it's easy to see why a majority of city dwellers rely on take-out menus. However, there are plenty of cooking schools and classes to break the cycle. The Brooklyn Kitchen in Williamsburg features classes that range from elementary knife skills to pig butchering, and courses on Thai street food and vegan tamales in between. On a larger scale, there's the Institute of Culinary Education, which offers a wide selection of classes with themes like, "Road Trip: American Regional Favorites" and "Spirited Grilling for Couples." And of course, no trip to the Big Apple would be complete without learning how to master one of the city's most cherished meals: pizza. Pizza a Casa Pizza School offers four-hour classes that teach students how to create a perfect NYC-style pie, from dough prep to balancing toppings and proportion.

While New York City offers plenty of classes on the fine art of Italian cooking, we think it's best to go straight to the source. Cooking Classes in Rome features five-hour classes in Rome's Trastevere district taught by chef Andrea Consoli. With the guidance of chef Consoli, you'll learn how to prepare a four-course meal including antipasto, homemade pasta and dessert. Still hankering for more than a five-hour tutorial? Check out one of the cooking vacations offered by Gourmet on Tour. These trips, which can last from three to seven days, take epicureans to some of Italy's best-known foodie destinations, like Sicily, Tuscany and the Amalfi Coast. On the Sicily trip, you'll travel to Catania and learn recipes from a local, sample some of Modica's legendary chocolate and tour UNESCO World Heritage sites.

Thanks to its proximity to the Tasman Sea, Sydney offers a bounty of mouthwatering seafood. If touring the city's best restaurants doesn't sate your appetite, consider attending a class at the Sydney Seafood School. Tucked into the massive Sydney Fish Market, the school offers classes covering seafood basics as well as sushi and sashimi workshops. Though the classes available here are a little less intimate than some of the other courses on this list (each class has a maximum of 50 participants), you'll still have the benefit of attentive service. Each class begins with a demonstration in the auditorium before students are divided into smaller groups in the school's state-of-the-art kitchen. Class programs change monthly, but the school's "Foodie Friends Friday" program takes place on the first Friday of every month. For $75 AUD (about $68 USD) you'll learn how to make a quick seafood dish, while enjoying a glass of wine, and you'll get to take home a souvenir apron. You'll find the Sydney Seafood School at the Sydney Fish Market in Prymont, just more than a mile southwest of the city center.

Napa Valley may be all about grapes, but the region's wine is nothing without a scrumptious meal. The Culinary Institute of America's (CIA) St. Helena campus offers classes for chefs of every skill level, with courses that range from two-hour demos covering cooking techniques, like grilling and cooking with wine, to multi-day boot camps. Boot camps, which can last anywhere from two to five days, feature a range of topics like "Gourmet Meals in Minutes" and "Techniques of Healthy Cooking." Once you've graduated from the CIA's crash course, head to the sprawling Oxbow Public Market. In this 40,000-square-foot foodie haven, you can take your pick from fresh ingredients, along with plenty of wine and riverfront dining. For a less hands-on cooking experience, consider taking a tour offered by Epitourean. Epitourean packages include hotel stays, wine tastings and tours and cooking classes.