Luke Skywalker's home planet, Tatooine, may exist only in the make-believe world of Star Wars, but astronomers have long known that planets with two suns exist in the real world too.

So far, mostly gas giant planets have been observed orbiting twin stars. But a new study suggests that rocky Earth-like planets can form in binary star systems -- and are likely quite common in the universe.

"Tatooine sunsets may be common after all," study co-author Dr. Ben Bromley, an astrophysicist at the University of Utah, said in a written statement. “For over a decade, astrophysicists believed that planets like Earth could not form around most binary stars, at least not close enough to support life." 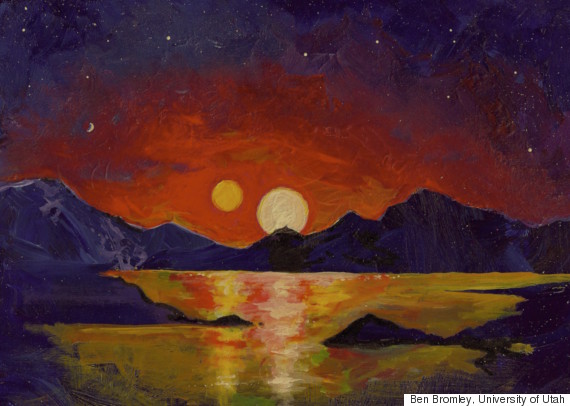 In this acrylic painting, Bromley illustrates the view of a double sunset from an uninhabited Earth-like planet orbiting a pair of stars.

Astrophysicists had speculated that the uneven gravitational pull of twin stars would prevent orbiting rocks and dust from coalescing to form Earth-like planets -- and even send planet-forming material on destructive collision courses.

“Planets form like dust bunnies under your bed, glomming together to make larger and larger objects,” study co-author Dr. Scott Kenyon, an astrophysicist at the Harvard-Smithsonian Center for Astrophysics, said in the statement. “When planets form around a binary, the binary scrambles up the dust bunnies unless they are on just the right orbit.”

The researchers used computer simulations and mathematical models to show that Earth-like planets could indeed form in a binary star system -- that is, if the planet-forming material orbits its host stars in a concentric, oval-shaped orbit. And the resulting rocky planets may be able to survive for tens of thousands of years, The Telegraph reported.

The study, “Planet Formation Around Binary Stars: Tatooine Made Easy,” was submitted to the Astrophysical Journal and uploaded to the online research archive arXiv.org on March 12, 2015.