While it's not entirely known what spurred early man to tattoo their bodies, we do know that the proof of tattoos dates way back to frozen tribesmen and ancient mummies. Mankind has always seemed to have some need, or love, of the tattoo art form.

Many cultures throughout the ages have used hand-poked tattoo techniques for their religious and tribal beliefs. Certain tribes in Somoa and Borneo use tattooing as a rite of passage for the individual to this day, honoring all of the ceremony and tools of their history. In Japan, a few master tattooers still use tools whose conception is nearly as old as the myths and legends of the stories and characters they portray on the skin of their clients old and young. Both of these ancient styles are even being handed down and used by a few of the newer generation of tattooist today.

When tattooing moved from the ancient world to Europe and the United States, the age of electric tattooing was born. Tattooing was most popular in the ranks of the military where many a solider, sailor, or pilot found themselves marking their skin to commemorate that time in their lives with a USMC badge, a battleship, a hula gal, or a nautical star. While the imagery was perhaps not as rich in historical imagery or as personal as one's family or tribal lineage, the images being depicted by the new-age tattooer still held true historical and artistic merit. Many of these "old school" designs and styles are some of the most popular of today's tattoo culture. As the years progressed, so did the types of clients sitting in the tattooist's chair.

Back in the day the street shop was far from being in the everyday common environment. Street shops back then usually attracted what society at the time would call a "less than classy" clientele. Still many different types and classes of people gravitated toward getting tattooed. Again, as the times changed, so did the shops. Along with the shops came an even more diversified group of artists and clients. We saw much of the youth starting to get tattoos as a way of rebelling against society, and many more as the years progressed as a form of following the trends of a modern culture. Many found themselves getting tattooed simply for the love of the art.

I find myself identifying with the latter. Unlike some of my younger, more adventurous clientele of today, I didn't get my first tattoo till the age of 21. It was only two short years later that I went from human canvas to tattooist. And I can honestly say, like my skin, becoming a tattooist changed my life. 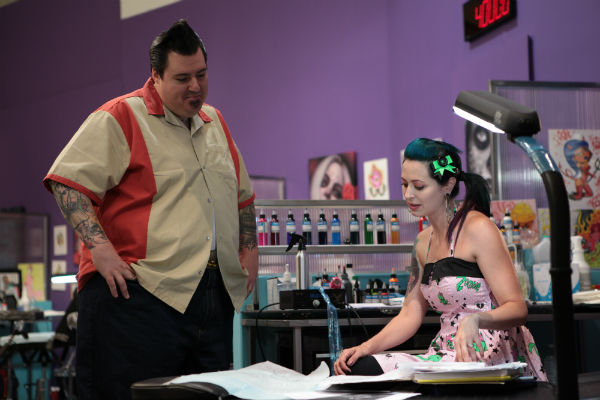 Many of my clients today range in the ages of 18-65. Several come to me to mark a period in their life or to remember a loved one. To many it is the truest and most personal of keepsakes. But for many others it is just a way to adorn their body in the way that they see fit. Unlike the heavily tattooed woman of the late 1800s to even the mid '80s, my female clientele of today find themselves in a more open-minded society that seems to be a bit more willing to see them for who they are.

Along with a female clientele, I've also seen a huge increase in female tattooers. Women tattooers have always had a place in the history of tattooing, many being looked back upon as true pioneers in the trade. But still, for many, it was usually just being a female in what was primarily a male-dominated business. Today the amount of women tattooers is steadily on the rise and many find themselves at the forefront of the trade, making a name for themselves as some of the top and most creative in the field.

Now, even with the rise and popularity of tattooing, this is not to say that society in general all look at tattooed people with the same open-mindedness as those wearing the work, but I think the sheer number of people proudly displaying their work and the uncertainness of who may be hiding some tattoo in a not-so-prominent location keeps the non-tattooed crowd a bit more open-minded and even a bit more tolerant today.

In my experience, the people I tattoo today are in it for the long haul. I very rarely tattoo an individual just once. My clients are steadily getting bigger work and more coverage. For many lucky artists like myself, our clients have decided to make this somewhat of a lifestyle and we'll be seeing many of them for several years.

The styles of tattoo art are as diverse and unique as the individuals wearing them today. And it's my thinking that these styles will continue to grow even more diverse and creative as more young and talented artists get into the trade. That, in addition to the imaginations of our clients who continue to push our talents to create the perfect way to express themselves and their ideas.