When Mel Angst and her husband, John, decided that their new tattoo shop in Pittsburgh needed better flooring, they bought their material of choice for mere pennies on the dollar.

The duo recently finished covering their floor in the copper colored coins, aided by a small army of volunteers recruited on Facebook.

As an incentive -- presumably to avoid 'nickel-and-diming' them -- the shop offered volunteers $10 discounts on a tattoo for each hour worked. Those who put in "some serious hours" also received a free penny tattoo and membership in "a pretty elite group."

"Amazingly enough, it's a lot cheaper to glue money to your floor than to actually buy tile," Mel told WTAE. "It's about $3 a square foot." The shop is 800 square feet and required 3 weeks worth of labor (about 300 man hours) to cover in pennies.

Workers at the bank that supplied the pennies told Mel it was the strangest request they've ever had.

Just one question: could you spare some change?

LOOK at a picture of the floor in progress [via Facebook]: 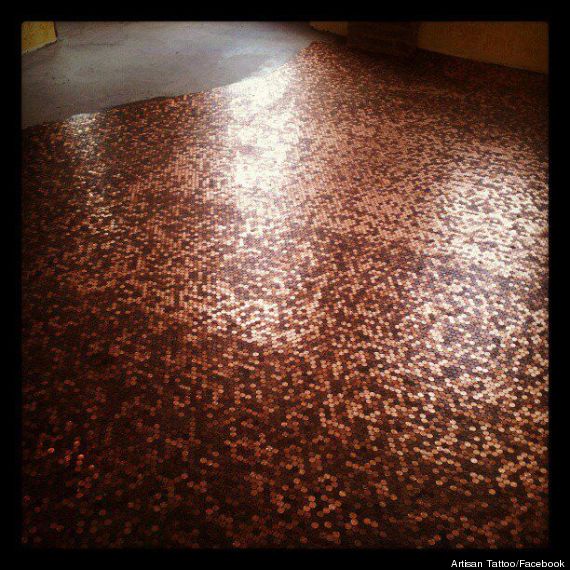 14 Reasons Why Marijuana Is Good For The Economy
More:
MoneyVideopennies

So You Broke Up. Now Who Gets The Debt?

Can Debt Destroy A Relationship? Here’s What Couples Counselors Say.