They're both body art, and their respective consumers are changing the way we live, work, eat, play and spend.

Stars, serpents, vines, crosses, beasties, tribal markings, insects and angels were once the fodder of the rebellious. No longer. Today I see them front-and-center in the workplace on young men and women in corporate jobs leading conventional lives.

The prevalence of their body art led me to check the stats, and I was surprised to find that nearly four-in-ten of all 18-to-30 year olds have one tattoo, about half that number have two-to-five and 18% have six or more--numbers that come from Pew Research Center's 2010 study on Millennials.

Then I realized the proverbial apple doesn't fall far from the tree. Millennial's equally individualistic parents -- aging Baby Boomers now 47-to-66 years old -- have also gone under the needle, but waived the ink. Instead of the sagging skin and wrinkles that used to mark middle age, this generation has pioneered treatments to turn back the clock.

The numbers prove the point. Out of almost 14 million cosmetic procedures done in the U.S. in 2011, 48% were performed on 40-54 year olds and 25% were performed on those 55 and over, notes the American Society of Plastic Surgeons' annual stats. But here's the kicker: in both age groups, only one percent of the procedures were surgical. Botox and other tissue fillers administered with needles were the top two and fastest growing procedures.

Who would have ever suspected that tattoo parlors and med-spas would be thriving growth industries in the depths of a recession? Or that Millennials and Baby Boomers would be naturally aligned thanks to their penchants to beautify their bodies?

In truth, they are also strongly bound together by the demographic trends they've fueled, starting with smaller households as Millennials postpone marriage and/or childbearing and Boomers divorce at an ever-growing rate. Today the dominant U.S. household is just one or two people - some 60 percent of American homes, according to U.S. Census Bureau figures. Married couples and/or singles with children now comprise a minority 40%.

Ostensibly, that means that this large number of Millenials and Boomers with no children to tax their budgets have more money to splurge on things they find important. And their unprecedented spending power adds up to the trillions. According to the U.S. Bureau of Labor Statistics 2010 Consumer Expenditure Survey, the average per capita annual expenditure for singles was $34,471; married individuals without kids clocked in at $28,017; those with children who spent the most were at $23,179 per person. Singles fuel the economy to the tune of $1.9 trillion yearly, and if you do the math it is reasonable to extrapolate that two-person households have purchasing power in the neighborhood of $1.5 trillion1 dollars per year.

Because these smaller households now dominate the American demographic landscape, they have--and will continue to--change every aspect of the way we live, work, play, eat and spend.

Take the arenas we use as benchmarks for the American economy, namely housing, autos and consumer packaged goods. Our shrinking homes, cars, stores, electronics and portion sizes prove the point. More meaningfully, this trend to 'small-size,' or perhaps 'right-size,' is likely to be permanent, especially as Baby Boomers pass the proverbial 'baton' over the next decade to the Millennials.

To me, as the CEO of Tetra Pak in the U.S. and Canada, this means that products and packaging for the food and beverage industry must adapt to suit both these changing generations for now, and Millennials in the future since their earning power will grow as the Boomers' erodes. Millennials are "about to double in importance regarding the spending they control," which will translate into an estimated $50 billion more by 2020, according to "Trouble in Aisle 5," a June, 2012 study from investment banking firm Jefferies Group and advisory firm AlixPartners. 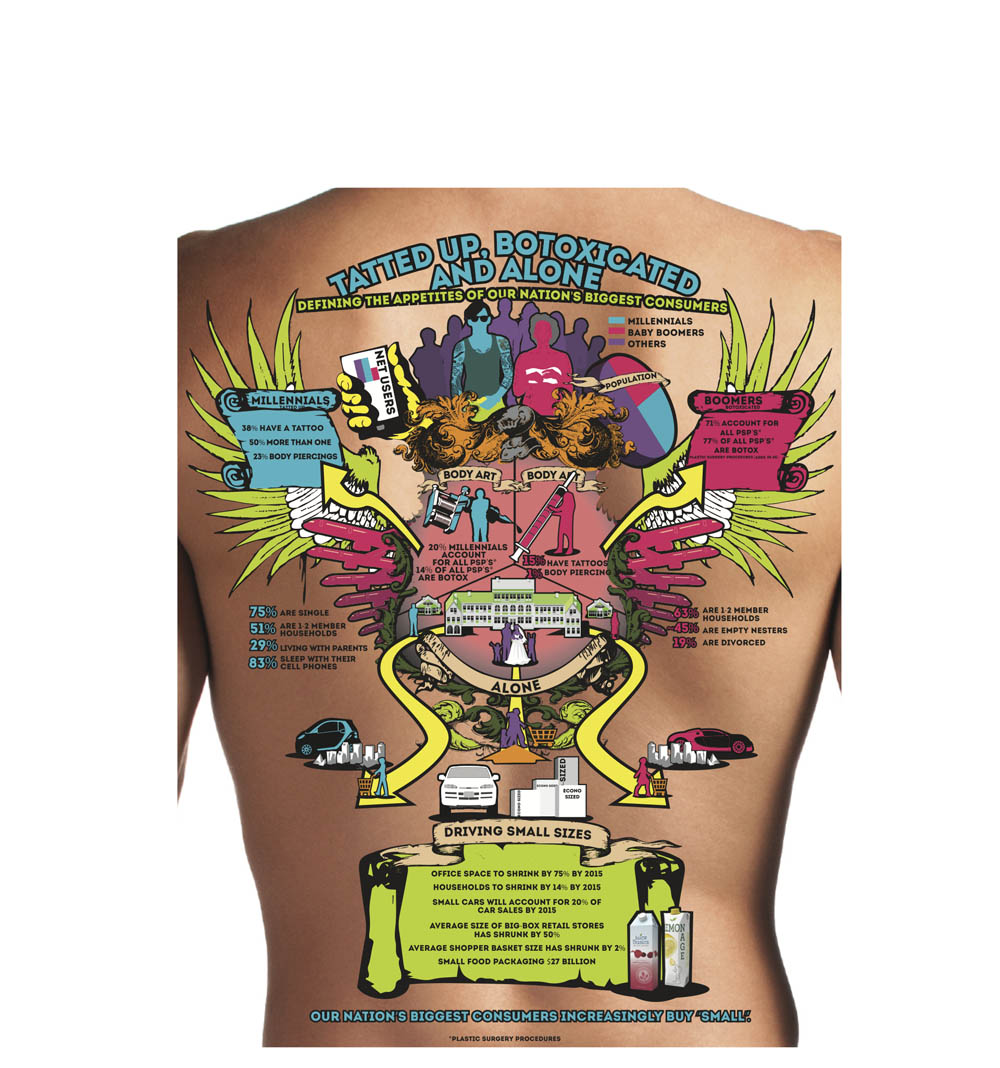 What do Millennials and Baby Boomers have in common? More than you might think, as this tattoo-inspired visualization of America's largest consumer powerhouses shows.

In my industry, profound changes will be required to meet the needs of these two generations, which are similar in some respects but very different at their cores.

Millennials are radically unlike their predecessors for two obvious reasons: multiculturalism and the microchip. They are the most diverse generation ever, and the first that can claim to be true digital natives, notes Prosumer Report from consulting firm Havas Worldwide. And their digital exposure has fueled a burning need for instantaneity.

"They treat their multi-tasking hand-held gadgets almost like a body part," notes Pew Research Center's Millennial study. More than eight-in-ten "sleep with a cell phone glowing by the bed, poised to disgorge texts, phone calls, emails, songs, news, games, and wake-up jingles," the study notes. These electronic tools also allow them to shop anytime of the day or night. They expect consumption on their terms: what they want, when and where they want it.

What they want with respect to foods and beverages, notes "Trouble in Aisle 5," is convenience; fresh and healthy offerings; greater variety of flavors and options; products that are natural and/or organic; and value--which is not always about price. Yet they are focused on purchasing at the best price possible, and have little brand or retailer loyalty except in luxury goods-and-services. There, Millennials represent the fastest-growing segment of buyers according to a recent study by American Express.

Not surprisingly, Millennials are also less apt to shop at traditional grocery stores. Instantaneous at heart, and price-driven, they shop mass merchandisers, club stores, drug stores and convenience stores with much more frequency than Boomers, notes "Trouble in Aisle 5."

On the other hand, Boomers are still brand and retailer loyal, and shop the 'old fashioned' way at the local grocer. With income and retirement funds falling thanks to the financial crisis, they're also less willing to pay more, and often come armed with money-saving coupons. Yet they still have a big influence and are intent on staying as youthful inside and out, which translates into consuming healthy foods that will keep them vigorous and extend longevity. But age is changing some of their preferences. Products that cater to specific dietary needs that result from aging are a booming market.

Collectively, these demographic factors are spurring an unprecedented and diverse range of new products and packaging.

A recent study from "Packaged Facts" shows that in 2011, beverages in "flavored, sweetened, unsweetened, low-fat or non-fat, health-specific and fortified varieties are becoming more prevalent in the marketplace," and the market for dairy-alternative beverages reached $1.33 billion that year with almond milk posting the biggest dollar sales gains in the category and soymilk remaining the most popular thanks to its health benefits.

And like homes, cars, stores and electronics, packages are getting smaller. It makes sense that as Millennials and Boomers look for new options that fit their lifestyle and living environments, supersize and family packs move to the sidelines and smaller packages moves front and center. A 2006 study from the research consultancy Hartman Group hit it on the head when they noted that individual packaging is here to stay since it fulfills the need to "manage waste and to acknowledge our increasingly individualistic eating patterns in a highly fragmented, fickle culture of eaters."

But 'individual' no longer means only dinky single-serve packaging for the take-your-lunch-to-work crowd. For starters, smaller households have less space, and buy less, eat less and store less. So smaller packages (16, 24, 32 oz. sizes) are more suitable to their needs. Also, sustainable types may walk to the market, which means less to lug. It's portability taken to a new level. Healthy eaters will like the fact that less will go more quickly, avoiding spoilage--an issue the value-conscious also appreciates. And all covet a sleek, compact package that doesn't hog space on shelves. Less is more at every level.

Yet performance and aesthetics count too; these packages must be easy-to-use and appealing--which today means they must have exciting shapes and arresting graphics. Think what Campbell's soup cans came to signify to Boomers once Andy Warhol glorified them in his iconic 1962 paining. That humble can, with its catchy red-and-white design, became a symbol of all that was modern, progressive and good in the post-war era. The next generation of packaging has to aim just as high.

So packaging has a big burden to bear, since it must incorporate a range of user-friendly traits that appeal to all segments of this fragmented and fickle market and the trends driven by their wants and needs. And all of these considerations are top of mind when we develop our carton packages at Tetra Pak. Thanks to this, a wide range of carton packages have been embraced by both 'name' and 'store' brands, and are earning recognition in the marketplace for their design, technical proficiency, value and sustainability.

Ironically, a 10-brand taste test of tomato soup at HuffPost Taste last week may herald the future of the container. Staffers bet the winner would be Campbell's Tomato Soup in the iconic 'Andy Warhol' can. But top honors went to Pacific's organic creamy tomato soup, which happens to be packaged in a Tetra Pak carton. These results support a recent study by Symphony IRI that showed that consumers perceive products in cartons to be fresher, more natural and better tasting, as well as easier to open, pour and store.

It calls a song by the most iconic Boomer songsmith of all time, Bob Dylan, to mind--"The Times They Are A-Changin." Clearly the tune can be a mantra anew as the shift of power moves from Baby Boomers to Millennials.