When asked during a recent TV appearance if she would "condemn" her son if he was gay, Yulia Volkova, former member of the Russian girl band t.A.T.u, shocked fans by saying that "yes," she absolutely would.

"A man must be a man," she told the host of the Ukrainian TV show "Lie Detector," as the audience cheered. Volkova added that God created man for the sake of "procreation."

The singer also appears to have said that a man has "no right to be a faggot." The slur was beeped out of video.

However, Volkova -- who became famous for openly kissing her bandmate Lena Katina on stage -- said that she'd be OK with it if her daughter was a lesbian.

"It seems to me that lesbians look aesthetically much nicer than two men holding their hands or kissing," she said on the show, according to The Independent. 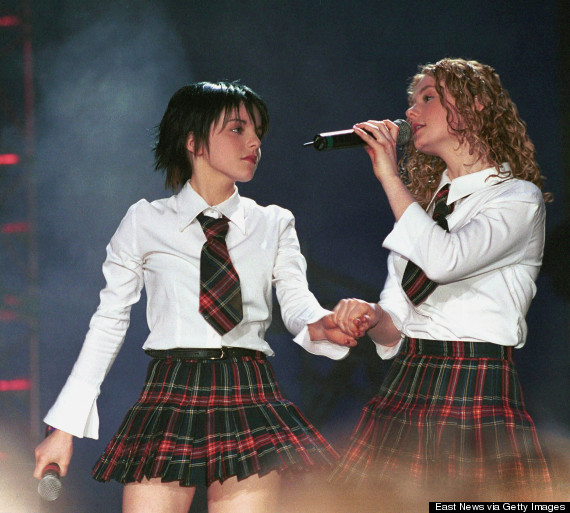 Yulia Volkova (left) and Lena Katina back in 2002 in Lodz, Poland.

Volkova told Russia's MK newspaper in 2012 that she likes both "boys and girls." As a member of t.A.T.u., she was once known for celebrating inclusion and championing LGBT rights.

"Our slogan is to love and it's not important whom to love," Volkova said in a 2006 interview, per the Independent. "We want to say that a boy can love a boy and a girl can love a girl. If all people would love each other, it would be easier to live in this world. If people are led by hatred and evil, nothing good would happen from this."

As a video of Volkova's comments went viral this week before being removed from YouTube, the 29-year-old singer was roundly slammed by many former fans.

"Good to know one of my idols is a complete homophobe, despite her and [Lena Katina] being a beacon of hope for LGBT in Russia," wrote one YouTuber Thursday after watching a clip of Volkova's comments. "I guess Yulia has become exactly what she preached against."