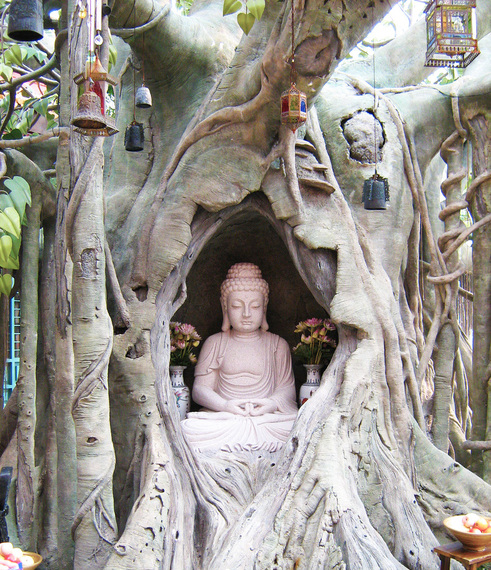 The New Moon in Taurus aligns at 16 degrees Taurus on Friday, May 6 at 12:29pm PST / 3:29pm EST and signifies a fresh start for creativity and a cycle of new beginnings.

It's said that the Buddha was a Taurus and it's easy to see the correlation when we look at images of this immobile figure in meditation embodying peace, substance and higher consciousness.

But anyone who's sat for any length of time in meditation knows that it's not always as blissful as it may look from the outside. Inside, we often fight fierce internal battles within. We face the shame, loneliness, righteousness and addictive thoughts that drive our subconscious behaviors.

Taurus season suggests privacy and introspection. Only through the meditative process of inner understanding can we truly integrate matter and spirit.

The Sabian Symbol for 16 Taurus is: A symbolic battle between "swords" and "torches".

Whether in meditation or out in the world, we can observe that battles between swords of judgement and the torches of spiritual light are raging.

This is echoed by asteroid goddess Vesta, which represents devotion to our personal eternal flame, applying to fixed star Algol associated with Medusa-like outbursts that see us "lose our heads". If our sacred devotion is threatened we may not take kindly to it.

We'll see more of this energy the last half of the month when the Sun and Venus transit this point and suppressed furies unleash. With this insight, what can we do now to unhook from any impending tantrums of our own?

The chart for this New Moon shows no planets in Air signs, so communication and ideas are sparse. In addition, the communication planet Mercury is retrograde so confusions abound. Don't be surprised if attempts to "clear the air" over misunderstandings turn futile with neither party willing to budge. Agreeing to disagree for the time being may be the best option over a righteous battle of wills. At this time, silence is truly golden.

We're in the heart of the 5 planets retrograde and our meditations can be filled with ancient cravings for nourishment at a deep, soul level. The only water in this New Moon chart is in timeless Pisces with Chiron, Neptune and the South Node forming a supportive sextile to the Taurus planets, offering an opportunity for our past suffering to act as the nourishing water to the soil of our healing.

Manifesting with the New Earth Grid

The prevalence of Earth energy at this New Moon - the New Moon in Taurus is in a Grand Earth Trine with Jupiter rx in Virgo and Pluto rx in Capricorn - provides grounding and traction for our intentions to take root and manifest in the physical world.

As with any New Moon, the intentions set from the time of the exact alignment - in this case May 6 at 3:29pm - for about 72 hours is ideal for contemplating new intentions and setting them in motion.

Intentions set around our security, values, self-worth and talents are especially aligned with this New Moon. Meditating with your bare feet on the ground will connect you with the ancient physical Earth.

You can also channel the energy of the New Earth Grid - the 5 D energetic grid that is fueling the ascension of human consciousness - to align with the energy of creation in alignment with your highest intentions.

Allow the ancient past and the distant future to mingle and flow through you. Let the internal wars dissolve into peace and harmony. Feel the connection to where you are now as your Body of Light rests peacefully in your Buddha Earth body.