Fashion blogger Tavi Gevinson of Style Rookie has written an open letter to Seventeen magazine regarding its June/July 2010 cover, slamming the glossy for implying that being fat and ugly is the worst thing that can happen to a teenage girl. 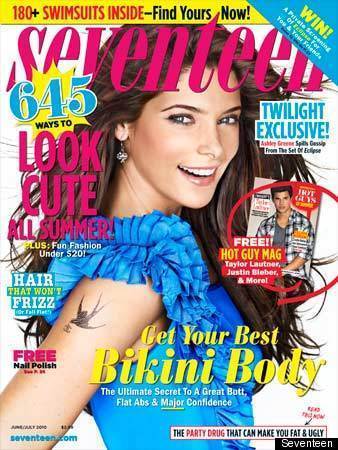 The words in question are found at the bottom right corner of the magazine and read, "THE PARTY DRUG THAT CAN MAKE YOU FAT & UGLY." And the drug that Seventeen is referring to is marijuana, which on its own does not actually cause weight gain. Rather, it induces "munchies," which result in excessive snacking, thus leading to possible weight gain. In any case, as Tavi writes:

By trying to discourage the use of drugs with the threats that it will make someone fat and ugly, you're saying the worst thing that can happen to your average reader, a teenage girl, as a result of drug use, is not that she will have any damage done to her brain or become unhappy, but that her appearance will suffer.

According to Tavi being fat and ugly "is not a negative thing if it is what is healthiest for a person." She says that she knows Seventeen's "intentions are good, but there are ways to discourage drug use without taking away from another important message." Clearly this is one teen wise beyond her years.