Tawang, the enchanting land of the ethnic Monpa tribe, with seven rivers that pass through it, is the hub of ancient Buddhist culture. However Tawang is experiencing a dramatic spike in social unrest and protests against 15 proposed hydropower dams, which has lead to violence by police against Buddhist Lamas (monks) who joined the protests.

Tawang is the birthplace of the 6th Dalai Lama and is said to have been visited by the great saint Padmasambhava. There are many holy sites associated with them in the basins of the Tawangchu and Nyamjangchhu rivers. Pilgrimages to the sacred sites of Hromang/Surbi village would not be possible if both the Tawang Chu (Stage 1 and 2) projects were built.

Seven men and three women activists of the Save Mon Region Federation (SMRF) were arrested on Dec. 23rd, 2012 for allegedly ransacking the office of the National Hydro Power Corporation (NHPC). NHPC was constructing a pavement to facilitate transport of equipment by their workers; the construction took place on private land in Kudung village and without consent from the villager. Monks who were recording the construction on video, at the request of the villagers, were also attacked. The Lamas say that even the women activists were severely beaten and subjected to third degree torture while in police custody. Locals from Tawang Monastery organized a huge rally on Dec. 24 to demand their release; in defiance of a ban against public gathering imposed by the District Administration. Police resorted to baton charges and tear gas to break up the rally. One monk was severely beaten and had to be hospitalized.

Private and government developers are in the fray to develop 3500 megawatts (MW) of hydropower in the Tawang district of Arunachal Pradesh. These 15 hydro-electric power projects are on rivers that are tributaries of the Manas River, which in turn is a tributary of the mighty Brahmaputra River. The Manas River flows through the Manas National Park, a UNESCO World Heritage site, which would be severely impacted by the construction of these projects.

Story continues below the slideshow

"Villagers are still not clear about how much land they would have to sacrifice and the compensation that they would get. NHPC has done nothing about employing local youths. Almost all benefits of the hydro-projects are being enjoyed by the politicians with little or no advantage to the people" said Lobsang Gyatso, General Secretary, SMRF. "Most of these projects are for the personal agenda of the builders, like the case of the M/s Bhilwara Energy Ltd. whose main idea is to supply power to Bhilwara textile factories in Rajasthan," he said. Land for the people is a scarce resource. Of the total area of 2085 square kilometers (805 square miles) of Tawang district, more than a quarter of land has been given to the Indian army and paramilitary forces owing to its strategic importance -- it lies close to Indo-China border. Another quarter is acquired by the civil administration for their uses. Having lost their land to the armed forces and the administration, people do not want to lose more land to large dams.

While dam proponents together with the civil administration are cashing in on dam building, socio-political and socio-cultural concerns in Tawang are seeing an upsurge. Public grievance is mostly due to the state government's apathetic approach while allowing these projects. The Memoranda of Understanding (MoU) are said to have been arbitrarily signed with upfront premiums paid to the state even before preparation of Detailed Project Reports (DPRs), Environment Impact Assessment (EIAs) and public consultation. The Government of Arunachal Pradesh has signed more than 165 such MoUs. The hydropower projects have become a money-spinner for the state government. With money being received upfront, the state does its utmost to expedite all clearances for the projects at the cost of social, cultural and environmental needs.

There is a lot of resentment about the lack of transparency on part of the developers and the state. Locals were denied participation during a public hearing for the 780 MW Nyamjangchu project on 8 Feb. 2011 on the grounds that only villages whose land is to be acquired can participate in the public hearing. One of the main concerns of the Monpa tribe is the influx of laborers for the dam construction that would irreversibly change the cultural dynamics of the area.

Many of the proposed projects in Tawang (Tsa-Chu I, Tsa-Chu II, Tsa-Chu Lower, Thingbu Chu, Mago Chu, New Melling, Rho and Nyamjangchu) are close to the Indo-China border thus making the region strategically vulnerable in the event of aggression. This is also of concern to the people.

Cumulative impact studies to assess the ecological, socio-cultural and environment impacts have not been carried out for any of the projects. Tawang is also an Eastern Himalayan biodiversity hotspot. It houses numerous locally threatened and endangered plants and animals including clouded leopard, snow leopard, red panda and macau mountain goat. Downstream impacts could also be felt in the Manas Tiger reserve of Assam that is contiguous with the Royal Manas National Park in Bhutan. Additionally, Tawang falls under seismic zone 5, which constitutes a very severe intensity earthquake zone. The projects are under various stages of clearance.

The Ministry of Environment and Forests has already granted environmental clearance to the three biggest projects -- the 600 MW Tawang 1, 800 MW Tawang 2 and the 780 MW Nyamjangchhu projects. The projects are now awaiting clearances for the impacts on forest lands.

While the state government is still pressurizing the central government to fast-track the projects, apprehension and opposition within the local communities continues to grow. "For a place like Tawang only 5 MW of electricity is enough. There is no reason why nature and culture should suffer, for ulterior selfish motives of certain people," said Gyatso. 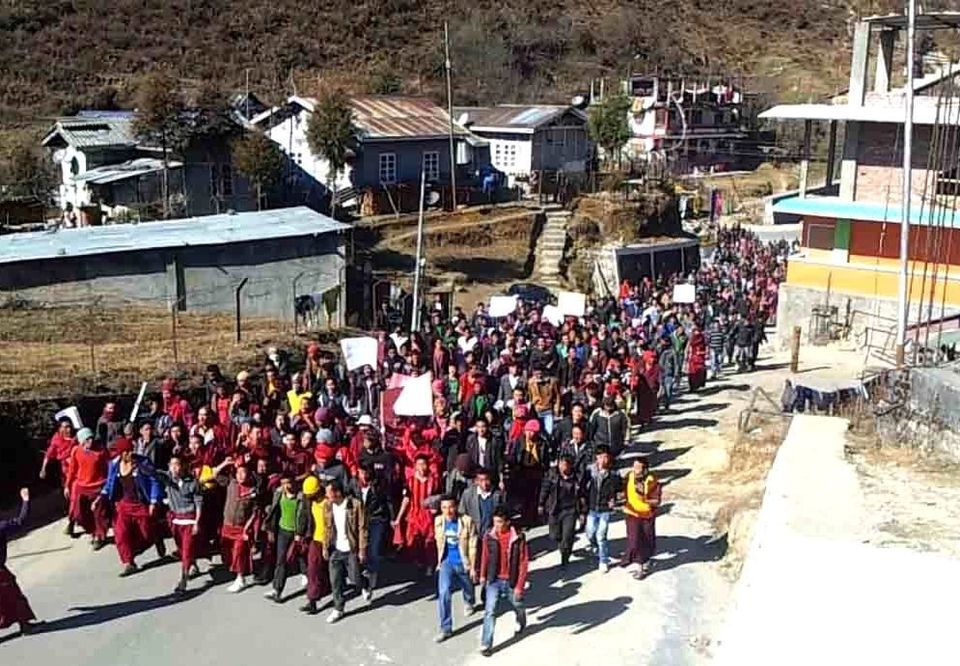 1 / 9
A protest rally by more than 1000 monks on the DC ofice road in Tawang on December 24 Credit: Urmi Bhattacharjee