Now the Special Session is finally over and the Legislature finally finished the budget they worked on long into the night. They handed it to the governor so he could have his way with it and put his pen to paper, signing it into law with one hand and slashing it with his veto pen line item by line item with the other. 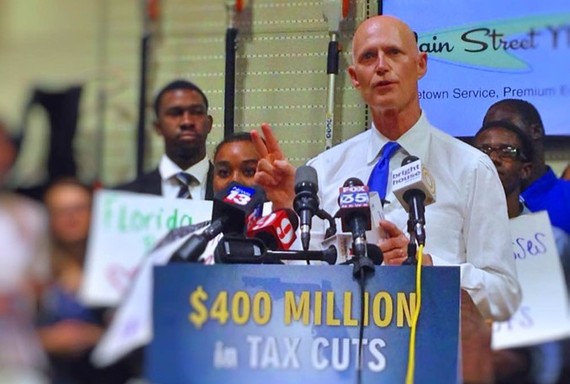 Gov. Scott tries to explain why the crowd should be happy about his tax cuts during the seven-city "tax cut victory tour" Photo courtesy of Bright House Networks | ©2015 News 13.

The governor has always been thrilled about shrinkage. He campaigned on shrinking government. The first week in his first term of office he shrank the Department of Health (DOH) by 2,000 state employees, some of whom had been there since the time it was called the Department of Health and Rehabilitative Services(HRS) under Gov. Lawton Chiles and many had been here long before that.

They saw their retirement plans shrink, along with their prospects for continued employment in the private sector, in places like federally qualified health centers, which offered them shrinking salaries far less than the state had been paying them, with far fewer benefits. He managed to make almost every other state employee's salary shrink as compared to inflation, by denying raises, with this year being no exception. They have only had one pay increase, for $1,000, in the past eight years.

But this tour was about shrinking state revenues in the guise of $400 million in tax cuts, while at the same time he flaunted almost $500 million dollars in line-item vetoes, in part to get back at the Legislature for not giving him the $673 million dollar tax cut package he requested.

His mantra to the public was simple. He inculcated that Floridian families knew how to spend their money far better than their state government could.

However, there are major flaws to his logic, making it far less logical and far more a long term bait-and-switch.

There are many things families could not directly spend their paychecks on because either, a) there is no direct payment system, such as general revenue or grants that could get the money to the agency that performs the action, or b) they may not be initially motivated to spend their family money on an agency that performs an action they might not need yet or need directly. You might not want to give money to a program like Early Steps, that helps parents of infants born with developmental disorders if you haven't been in that situation yet or don't have a friend or relative with that need.

The average family doesn't look at their disposable income, that money left after you've paid all your own bills, to see whether your community needs more money for infrastructure. Sen. Jeff Clemens asked for $500,000 for Lake Worth storm water and waste-water improvement. The governor decided Lake Worth wasn't worth it. This isn't something the people of Lake Worth might talk about around the kitchen table, but it will affect them in the long run. But that is why we have a Legislature and state governmental budget system to do that work for us.

But the governor doesn't think that the government knows how to spend money as well as Floridian families do, even though he is part of that government. But we'll put that part of his logic aside for now. In the round can in the corner.

He doesn't trust his Legislature to spend the money, either. That is why he vetoed the straightforward $15 million UCF improvement sponsored by Senate President Andy Gardiner, who pushed for Medicaid expansion against the governor's wishes, and projects near and dear to Pres. Gardiner's heart, like secondary education for Students with Unique Abilities, and one for $9.5 million for the Florida Association of Free and Charitable Clinics. I guess, if you're going to shrink available health care, make it small, or not at all.

He also doesn't trust his Cabinet. That's why he vetoed $1.6 million to give the state's 606 Forest Service firefighters each a $2,000 a year pay raise, which was championed by Agriculture Commissioner Adam Putnam, who questioned the governor's out-of-the-sunshine firing of Florida Department of Law Enforcement (FDLE) chief Gerald Bailey.

Here's the big rub, though. As citizens, we go to the offices of our legislators in their district offices. Sometimes we go to Tallahassee and talk to them there. Or we get together with an advocacy group like SEIU or FloridaCHAIN or a Disability Caucus and talk to them as a group. Sometimes we as groups even hire a "paid advocate" (you can call them lobbyists, it's not a bad word) and they talk to the legislators. The bottom line is that, when the legislators act, for the most part, they are acting on our behalf, on the behalf of Florida families. Were some of those late-night special projects brought out by special interests? Yes. Absolutely. And some of them were our special interests.

Just don't get too comfortable, reveling in the glory of all of the shrinkage your governor is giving you. Property taxes are expected to rise $500 million statewide.

Then we will all have to sit back and wonder just what we really accomplished.

Gary Stein MPH, a native Detroiter, worked for the Centers for Disease Control, landed in the Tampa Bay area to work for the State Tobacco program and is now a policy consultant, a health advocate and activist and blogger for Huffington Post. He has also been the executive director for Health Equity and Accountable Care and the Policy Director for FAAST, Inc. Column courtesy of Context Florida.