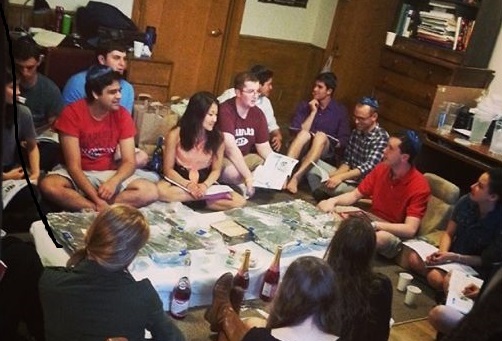 (Passover Seder in a Harvard House)

A rabbinic friend who worked in hospice care once told how he placed a Seder-plate - a platter with the traditional, symbolic elements of the Passover meal - on the hospital-bed-tray of a nonagenarian whose memory-loss was so profound that she had not recognized the members of her own family for several weeks and had been uncommunicative for many days.

The elderly woman looked at the egg and the shank-bone, and the greens and the bitter herbs, and she nodded slowly for several long moments, and then, in thickly Yiddish-accented Hebrew words, in the Polish pronunciation that must have been the idiom of her early life in the Old Country, she said, distinctly and emphatically, "Avudim hayini" -

"Once, we were slaves," the traditional opening of the exodus-narrative at the Passover Seder - and, in finding those words within herself, for that moment, even if only in that way, the elderly woman seemed to have a sense again of who she was. The memories of a lifetime may be forgotten, my friend's account from a bedside on the verge of life's end seems to say, and yet that essential story, so constitutive of Jewish identity, may yet remain.

It is noteworthy that the capsule-narrative of captivity in Egypt, of calling out to God, and of escape amid "signs and wonders" that is the centerpiece and the essential substance of the Seder-night, is, in its original, biblical context, a formula to be recited by each Israelite householder upon bringing the first fruits of one's homestead up to the Temple in Jerusalem:

Reciting the story of Israel's origins was something like filing one's taxes, as prescribed by the biblical instructions. One did not only bring one's own first-fruits to the Temple, but one also declared that one was doing so because one had a personal part and a stake in the story of the people. The words that the elderly woman in the hospice bed had not forgotten were the essential declaration, year after year, that said, in effect, "The story is ongoing, and is my story."

In their instructions for the Seder-night - in the tenth chapter of the tractate on Paschal Offerings, in the Mishnah, the earliest rabbinic law-book, from about the year 200 of the Common Era - our ancient rabbinic sages also prescribed a way in which the individual householder was to make the story of the people personal. Once the preliminary elements of the festive, home-based ritual for the evening have taken a sudden turn - with the pouring of a second cup of wine - away from the usual pattern of a Sabbath or holiday-evening celebration, prompting the alert child at the table to ask, "Why is this night different?" (an observation into which the parent is instructed to coach the less perceptive child), the Mishnah instructs that the parent is then to explain by narrating the ancient story, "beginning with ignominy and ending with celebration," and must "expound, from 'An Aramean on the verge of oblivion, my father' until the very end of the account."

The essential instruction for the Seder-night is not merely to recite the narrative of the exodus from Egypt, or to read it aloud from a book. The imperative is to interpret, to bring oneself to the telling, to make it one's own. "In each and every generation," say our ancient Rabbis, "one must regard oneself as though one personally had come forth from Egypt." The more one adds individually to the telling of the story, says another ancient rabbinic teaching, the more praiseworthy.

Filing one's taxes, giving a detailed account of one's financial year, is - if we reflect on a deeper meaning of the duty (fancy that!) - a way of affirming that one's own earnings are part of a Gross Domestic Product, not only one's own personal productivity, but one's contribution to the overall account of a nation and its wellbeing.

Similarly, one's own interpretation of the narrative of slavery and exodus from Egypt, year by year, is a personal contribution of one's own perspective to a greater story. This is not merely something that happened to our ancestors, we say - it is something in which we still take part, that defines our identity and shapes our understanding of our lives.

That is why, although my rabbinic colleagues and I offer and host a variety of Passover Seders on the opening nights of the holiday, I am more excited, to be honest, by the many Seders our Harvard Hillel team enables students to host for their peers throughout the University. I love that the Harvard Crimson holds a Passover Seder, with food from our kosher kitchen and with materials we provide, but in its own distinctive way - as do the Marching Band and the Sailing Team, and numerous groups of students clustered in suites and common rooms throughout the residences of the campus. The more tellings of the story, and the more personal, the more praiseworthy.