For the majority of the public, including small business owners, Tax Day might not be our favorite time of year. However, it remains an important day because it means paying our dues for the numerous public benefits we receive, from our infrastructure and roads to our education system to our national security.

But what about for many wealthy multinational corporations?

For them, Tax Day is simply the deadline to make their U.S. profits appear on the books of some offshore bank account and avoid paying taxes they owe, thanks to tricky maneuvers and thousands of accountants working to exploit every loophole in a tax code that is chock-full of them. Businesses should compete on innovation and the quality of their products, not on the cleverness of their tax attorneys.

In a report released yesterday, U.S. PIRG Education Fund found that the average small business owner would have to pay an additional $3,244 to make up for lost revenue due to the rampant corporate abuse of offshore tax havens. That's money that could be invested in the education and infrastructure systems that we all benefit from. 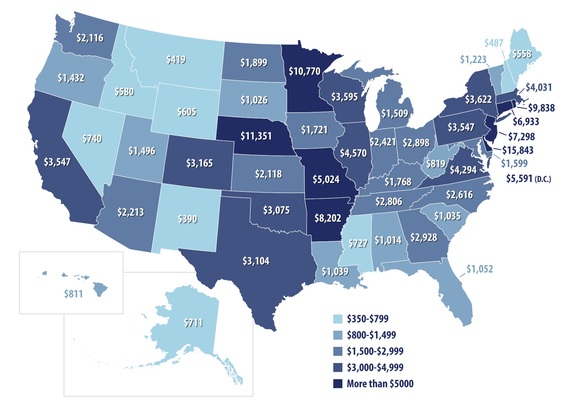 The map above shows how much small business owners in each state would have to pay in additional taxes to make up for offshore tax haven abuse by large multinational corporations.

Many of America's largest multinational corporations use loopholes in our tax code to make profits made in America appear to be generated in offshore tax havens like Bermuda, where they pay little to no taxes. Often, these subsidiaries are nothing more than a P.O. box, with few if any employees and little real business activity. In fact, the Ugland House, a modest five-story office building in the Cayman Islands, is the registered address for 18,857 companies, none of which actually does business in the tourist hot spot. And when large companies shirk their taxes, small businesses get stuck with part of the bill and are put at a competitive disadvantage.

As a small business owner, I pay my taxes. As a culture, we pay taxes to make a better living environment for all -- from a good education system that develops a good workforce, to a safe and efficient infrastructure. It is unfair that huge corporations -- the big guys that already have every advantage over small businesses -- are avoiding their taxes by using offshore tax havens. It is unfair that while we're all paying back into the system that gave us our profits, they are not.

Lora Fraracci is the owner of EarthMadeClean, which offers commercial and residential cleaning services in Des Moines, Iowa. She said:

When I hear that businesses are getting all of these breaks, and taking advantage of legal loopholes, it frustrates me because I don't have that advantage. If the outlets are there to take, somebody will take them. If we don't close these loopholes, people are going to continue taking advantage of them. If people or corporations don't pay their taxes, it hurts our entire economy.

Our loophole-ridden corporate tax code creates winners and losers. The winners are a narrow set of large multinationals that boast armies of tax lawyers and accountants, and the losers are average taxpayers and small business owners who are left to foot the bill.

Earlier this year, the Senate Finance Committee, chaired by Sen. Orrin Hatch along with Ranking Member Ron Wyden, invited the public to weigh in on tax reform, allowing civil society groups, businesses, and interested stakeholders to submit comments with ideas to reform our tax code. In its comment, U.S. PIRG urged Congress to close the most egregious tax loopholes that let corporations get away with tax avoidance.

Putting to rest bad policies like corporate tax holidays, bad practices like corporate inversions, and bad loopholes like the CFC Look-Through Rule will bring us closer to a fairer tax system -- one that doesn't arbitrarily create winners and losers. The public is clamoring for a system where everyone plays by the same set of rules. The time for reform is now.