This word "fairness" keeps coming up around tax day, particularly in discussions around the Buffett rule.

Many have questioned what I and others mean by "fair." I've got five answers. A fair tax system should be:

Conservatives invariably counter that it's not fair for 47 percent of households to pay zero federal income tax (most recent data from 2009).

I even got a pretty moving note from a guy who said he didn't think it was fair that just because his income was so low, he didn't get to pay federal taxes. He wanted to contribute! (The usual Republican talking point here is "well, why don't you write a check to the Treasury?!" which is just silly. Whether it's this big-hearted low-income citizen or Buffett himself, their point is clearly systemic, and while their actions alone might make them feel better, they won't cure the perceived problem they're identifying.)

Liberals counter with two points. First, as the figure below shows, almost everybody pays taxes, and in fact, when it comes to payroll taxes, the middle class pays a higher effective rate than the wealthy (because those taxes cap out at around $110K). Middle and low-income households pay an effective rate of about 9 percent on payroll taxes; the top 1 percent pays 2 percent; middle-income families pay 17 percent of the total payroll tax bill; the top 1 percent pays 4 percent. And state tax rates tend to be pretty flat. 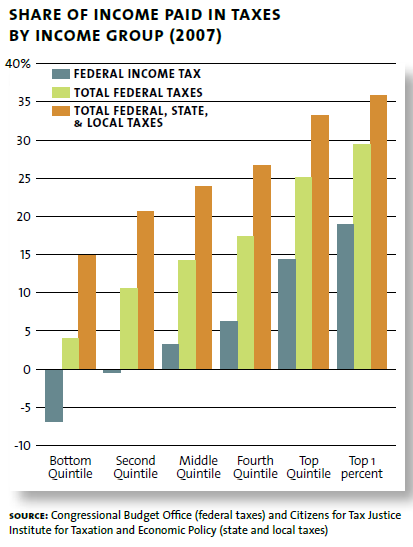 Second, as the next figure shows -- and these are important data points in reference to the first fairness principle above (progressivity) -- the actual effective tax rates of the wealthiest families (taxes paid as a share of income) have fallen quite sharply, because a) supply-side tax cuts from the Reagan and GW Bush-era only partly offset by Clinton's progressive changes in '92, and b) their pretax income has grown so much more quickly than their tax liability. 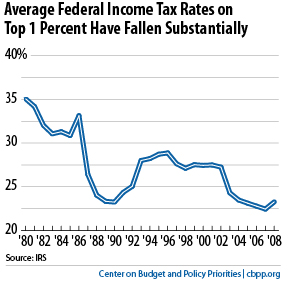 In other words, the wealthy have been paying a larger share of federal income taxes not because their tax rates have gone up -- in fact, they've gone down. It's because they've been collecting the lion's share of the growth for decades.

A key factor here has been the large decline in the rate of taxation on asset-based income, like capital gains, and the much increased concentration of that income among the wealthiest families. Those changes are related -- once you advantage a particular income type, you're going to see more of it. And these dynamics are also related to the bubble and bust syndrome in which we've been stuck, along with the financialization of the economy, both of which are problems to be discussed another day... let's stick with fairness for now (though I could see another principle here: a fair tax system doesn't incentivize the underpricing of risk, leading to busts that invariably whack the have-nots who are then called upon to bail out the haves; in practice, this principle would militate ending the favored treatment of debt financing in the tax code... hey, I like that... let's call it principle #6!).

Anyway, that's the rationale for claiming the Buffett rule increases fairness: it partially repairs the diminished progressivity with respect to certain millionaire+ households, specifically those with most of their income from capital as opposed to wages.

Now, you might object to progressivity, but I'd argue you're starting from a different place than most of us. Sure, you'll find folks to agree with you -- advocates of the flat tax might join you, for example. But those of us invoking fairness are generally invoking the progressivity that has always been a bedrock feature in the federal income tax.

And that is as it should be, particularly in an era of so much pretax income inequality. The fact that tax code has become less progressive in a period when the pretax income distribution has become more unequal is another dimension of unfairness -- a violation of principle #2. The figure below shows that the system of taxes and transfers (which are, of course, related as the former pays for the latter) has become less of a bulwark against inequality over time. It shows that inequality grew 10 percentage points faster after taxes and transfers than it did before.

I won't go through all the above principles, other than to say that #4 is clearly in trouble and this redounds to #3. Were we to follow the roadmap in the House Republican budget -- for that matter, any Republican, supply-side, trickle-down tax plan -- we would very much be violating those two principles, as these reverse-Robin-Hood schemes redistribute upward.

It's not simply that these plans lower taxes on the wealthy much more so than they do on the poor. It's that they leave us with too little revenue to help offset the disadvantages that block the opportunities of the least well off, that provide them a safety net in hard times, that help them meet basic needs of food and shelter. It is not at all hard to connect the dots between regressive tax changes and cuts in Pell grants, nutritional assistance, retirement security, and pretty much everything else.

Finally, despite all the predictable caterwauling, the only tax fairness principle that seems intact is #5. If you were rich or poor before tax day, you'll be so again tomorrow. Of that, you can be certain.