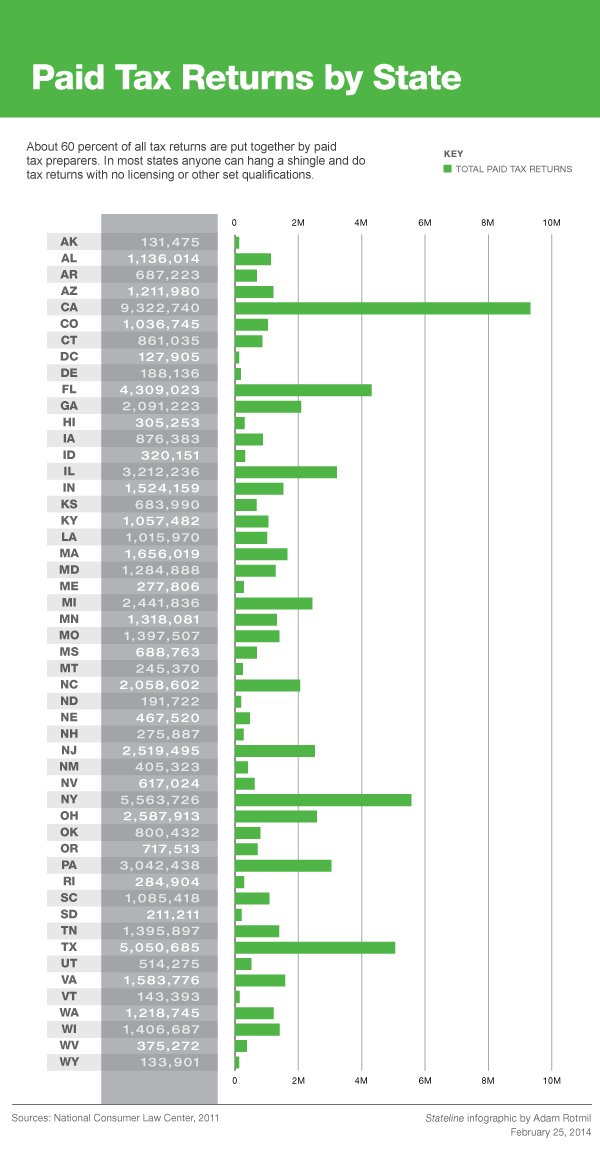 This piece comes to us courtesy of Stateline, where it was originally published.

Only four states require testing and continuing education for hundreds of thousands of independent tax preparers who make a living deciphering the nearly 74,000-page U.S. tax code for many Americans.

After a federal appeals court threw out proposed IRS rules regulating tax preparers, the Wild West of the tax preparation industry will continue for another tax season. In its Feb. 11 ruling, the U.S. Court of Appeals for the District of Columbia said the IRS was not authorized to write the proposed regulations, asserting that power was reserved for Congress and the president.

Certified accountants who do taxes for clients are regulated, as are lawyers and tax specialists called “enrolled agents,” who must pass a test and be recertified periodically by the IRS. But many of the small, independent tax preparers are subject to no standards at all. They simply hang out a shingle and fill out tax forms for clients.

Consumer groups note that independent preparers are less regulated than hair stylists, who are required to be licensed in all states and the District of Columbia. Estimates of how many unregulated tax preparers exist vary widely, since they are not required to register anywhere. The Institute for Justice, which successfully fought the proposed IRS regulations in court, estimates that more than 350,000 small independent tax preparers would have been affected by the regulations.

All told, up to 1.2 million tax preparers make a living deciphering the labyrinth U.S. tax code for taxpayers. The IRS reported 63 percent of all returns were done by tax preparers in 2013 and estimates are that about half were filed by unregulated preparers.

Things that have gone wrong in returns filed by some tax preparers range from errors that might cost taxpayers part of their refunds or result in a taxpayer having to pay restoration and penalties for illegal deductions, to deliberate fraud cases where preparers consciously misstate refunds or deductions to clients and pocket part of the money, according to consumer groups.

Robert Kerr, senior director of government relations for the National Association of Enrolled Agents, said in “most states, you have higher requirements to be a barber than a tax preparer. The downside of a bad haircut pales in comparison to a bad tax preparer. In the meantime it is the Wild West—there are no cops on the beat.”

In four states, there are requirements for independent tax preparers who are not CPAs, “enrolled agents,” attorneys or certain types of banking officials:

In 46 states, there are no such regulations.

A consumer group effort is underway in Ohio to get the legislature to approve requirements for tax preparers. David Rothstein, director of public affairs for the Neighborhood Housing Services of Greater Cleveland, said he is working with Republicans and Democrats in the legislature to “try to get them to put forward regulations that would require preparers to be registered in the state of Ohio. It would require a certain level of competency and certain disclosures.”

“It wouldn’t be that burdensome,” Rothstein said. “Now, the floor is extremely low -- because there really isn’t one.” He said recertification is important because tax laws, both state and federal, change every year and keeping up with new laws is critical.

But Elmer Kilian, an 80-year-old independent tax preparer who hangs a wooden sign outside his home in Eagle, Wis., every tax season, said the certifications wouldn’t help much and would be costly for small operators. He said it wouldn’t cut down on fraud because “we’re responsible for the taxes listed on the forms, but it’s the taxpayer who is responsible for the numbers on the forms. The preparer just puts them in where they are supposed to go.” He told Accounting Today that he does his returns by hand and charges only $30 to $40 for an individual client.

Kilian said he does not object to training in principle, but was upset that the initial IRS rule exempted CPAs and attorneys. He said big tax firms like H&R Block and Jackson Hewitt would have no problem meeting the requirements because they already have systems in place to train their employees. But independents don’t, he said.

“I do individual forms, and small businesses with income of less than half a million,” he said. “When you get over half a million you need more expertise.” 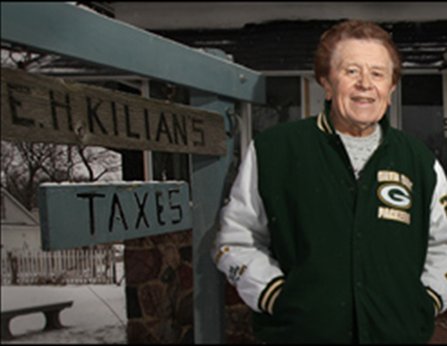 Elmer Kilian, an independent tax preparer from Eagle, Wis., has hung a wooden sign outside his home every tax season for 30 years. Independent tax preparers are fighting proposed rules that would require regulation. Only four states have such laws now. (Photo courtesy of the Institute for Justice)

“States Are Our Best Hope”

Horror stories are legion. In a case disclosed this month, NBA basketball star Kevin Durant of the Oklahoma City Thunder is suing his tax preparer for taking invalid deductions. The lawsuit says Durant’s accountant deducted expenses for Durant’s personal travel and personal chef. That is not allowed because it is a “personal” expense, not a business expense, under IRS law.

Durant faces the possibility of having to pay back taxes and penalties and is suing his tax man, Joel Lynn Elliott, for $600,000. Messages left at Elliott’s office were not returned.

Opponents of preparer regulation argue the Durant case shows why it won’t work: Elliott is based in California, one of the four states with registration requirements.

The Institute for Justice’s Dan Alban, the lead attorney in the federal case of Sebina Loving v. IRS, said there are “already numerous statutes prohibiting tax preparer fraud. The IRS and a handful of consumer groups see these licenses as a panacea. There’s no reason to believe they would fix the problems they say they would fix.”

A Government Accountability Office study of all kinds of tax preparers in 2008 found numerous cases of incorrect returns, including failing to claim all available deductions in seven out of nine cases, not reporting business income in 10 out of 19 cases, and unwarranted extra refunds. Some preparers took deductions for children that didn’t qualify, and failed to report business income in almost half the cases studied.

Chi Chi Wu, staff attorney at the National Consumer Law Center, a consumer advocate group, said investigations by “mystery shoppers” have found so many cases of incompetence and fraud that the licensing requirements could only help the situation.

“States are our best hope at this point,” she said, citing Congress’ inability to pass much legislation in general.

Wu said the NCLC conducted three rounds of mystery shoppers, in 2008, 2010 and 2011. “We weren’t even looking for (fraud), we were looking for refunds and anticipation loans (loans from tax preparers based on forthcoming tax refunds). We found ‘oh my God there’s all this fraud going on in tax preparation.’”

“I used to joke that my middle schooler could set up a card table and do taxes,” she said. “He’s a little bit older now and probably better than some of the preparers out there.”

Just this month, the IRS charged a Milwaukee tax preparation company, Trustee Tax Service, with filing false tax returns that generated as much as $1 million in undeserved refunds, the Milwaukee Journal Sentinel reported. The company falsely claimed self-employment for their customers, complete with fake records, the IRS said.

Russell Fox, a Las Vegas financial manager, tax professional and blogger, acknowledges there are bad apples in every business, but said regulation wouldn’t stop the bad guys. “I don’t care if the regulations required 20 days of filling out papers, there are going to be bad preparers,” he said.

He said the IRS can go after the bad preparers now. What the regulations will do, he said, is cut down on the competition, which will mean increased prices for consumers. That said, Fox acknowledged there are “people who are preparing tax returns who shouldn’t be.”