Since the National Football League allowed the St. Louis owner to move his team to Los Angeles, a host of columnists have slammed the action, claiming the "loud and loyal" Rams fans would be hurt. But it ignores the fact that St. Louis had one of the least supportive fan bases in the entire NFL, which contributed to the move to L.A. And throwing even more taxpayer money toward a St. Louis stadium that is likely to be fairly empty seems like a bad idea.

Dan Wetzel of Yahoo News described the move as "cold and cruel," noting that it was a victory for Rams owner Stan Kroenke. "Meanwhile, it's over for the folks in St. Louis, who are left feeling the worst loss imaginable for a sports fan: abandonment and betrayal, a realization they are just powerless pawns, if even that much."

Wetzel adds, "This does nothing for those left behind in Missouri, the ones who loudly and loyally supported the Rams, who embraced the franchise, who made it part of their lives and now are told no one cares. The ones who didn't do anything other than what the team asked them to do back in the 1990s -- prove that St. Louis was a viable NFL market."

Simon Evans adds some quotes in his Reuters article "St. Louis fans distraught as Rams head west." Missouri Governor Jay Nixon claimed "This sets a terrible precedent not only for St. Louis, but for all communities that have loyally supported their NFL franchises... St. Louis is a world-class city deserving of a world-class NFL team."

Evans adds quotes from fans and the St. Louis NFL Stadium Task Force, each emphasizing how loyal the fans were, and how supportive they were of the team, and what a bad move it was to move to L.A.

Ben Rohrbach from Shutdown Corner adds words from St. Louis Mayor Francis Slay. "The NFL ignored the facts, the loyalty of St. Louis fans, who supported the team through far more downs than ups, and the NFL ignored a strong market and viable plan for a new stadium." He also includes a quote from the St. Louis County Executive, who claimed "This region deserves an NFL team. This region is fully capable of supporting an NFL team. That team should have been the Rams."

One might conclude that legions of fans were out there backing the Rams, and taxpayers should cough up money for a stadium to support them. But evidence paints a different portrait.

According to Statista.com (based on information from ESPN), the St. Louis Rams finished dead last in the NFL in attendance, with an average of only 52,402 fans per game. That's about 14,000 a game less than the completely awful Cleveland Browns, a franchise parodied for ineptitude.

St. Louis is tied for tenth in terms of media market potential, but in the bottom five for actual ratings. And if anything, the data from Sports Business Daily from 2013 showed that the team ratings declined over time. Their ratings are almost half of those of the Detroit Lions, Buffalo Bills, and San Diego Chargers from 2011-2013.

One could make the argument that the team plays in an ancient stadium, but it's only about 20 years old. You could fault the team, but they had a coach who's been to a Super Bowl, a quarterback with playoff experience, the most exciting rookie running back around with college star Todd Gurley, and one of the better defenses. There was a reason to go to the game. Besides, teams with worse records had more fans in the stadium, or watching the game at home. 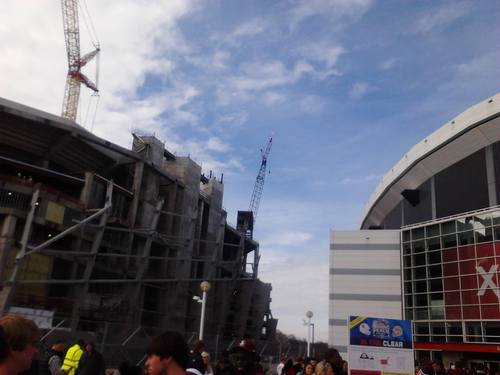 Photo by the author shows the new Atlanta Falcons home, Mercedes-Benz Stadium, next to the Georgia Dome.

St. Louis lost the Hawks in basketball to Atlanta, the Cardinals of football to Arizona, and now the Rams. The city loves their baseball Cardinals and their hockey Blues, but the numbers show it just doesn't seem like St. Louis can hold much more. And taxpayers should not kick in tons more money, if most folks in the region show little interest.