By Claire Cameron BEDFORD STUYVESANT -- An 11-year-old girl may never walk again after she was shot in the neck outside her home Friday night when a teen gunman opened fire on two men standing nearby, police said.

The girl, Tayloni Mazyck, or "Tutu" as she is know, was recovering at New York Presbyterian Saturday morning after undergoing surgery to remove the stray bullet, police said.

The violence unfolded about 8:30 p.m. Friday when a 17-year-old gunman started unloading as he walked down Throop Ave, shooting at two men standing outside 590 Gates Ave., police said.

Tayloni was waiting for her aunt, Michelle Fitzpatrick, outside the door of her apartment building at 600 Gates Ave. when she was accidentally struck. Her mother and her aunt's 7-month old granddaughter were with her at the time. No one else was injured.

Fitzpatrick said she was running late to pick up Tayloni and taker back to her home on McKinley Ave, Brooklyn. The girl usually stayed with her aunt on the weekend, and had grown up alongside her four female cousins. The girls were like sisters to each other, Fitzpatrick said.

"I had her with me since she was a baby," she said. "She was just a joy to be around, full of life and energy. Now she is never going to be the same."

The full extent of her injuries was still unknown following surgery on Saturday morning. Doctors told the family that Tayloni had no feeling in both her legs, and they were unsure if she would be able to walk again, said Fitzpatrick.

Despite the trauma, her father Robert Mazyck said that his daughter was awake and able to respond to questions.

"She can't move her legs, and her arms just tingle and hurt when you touch them," he said. "But she is in good spirits. She is awake, she is alive, and she knows what is happening around her."

The injured girl was due to graduate from local elementary P.S. 44 later this month. A math and track team enthusiast, her elder brother Daiquan Mazyck, 15, said Tayloni had been talking about her graduation ceremony for weeks.

"She was always asking me, everyday, if I was going to come to her graduation," he said. "And I said I would be there even if I had to skip school."

An NYPD surveillance tower video camera caught the shooting on camera, leading police to identify the suspect as Kane Cooper, a 17-year-old who lives less than a block from Tayloni and who was known to members of the 79th precinct's anti-crime unit.

Cooper's intended targets are not known to the family, her aunt said.

Cooper was charged with attempted murder, assault, criminal use of a firearm and reckless endangerment. 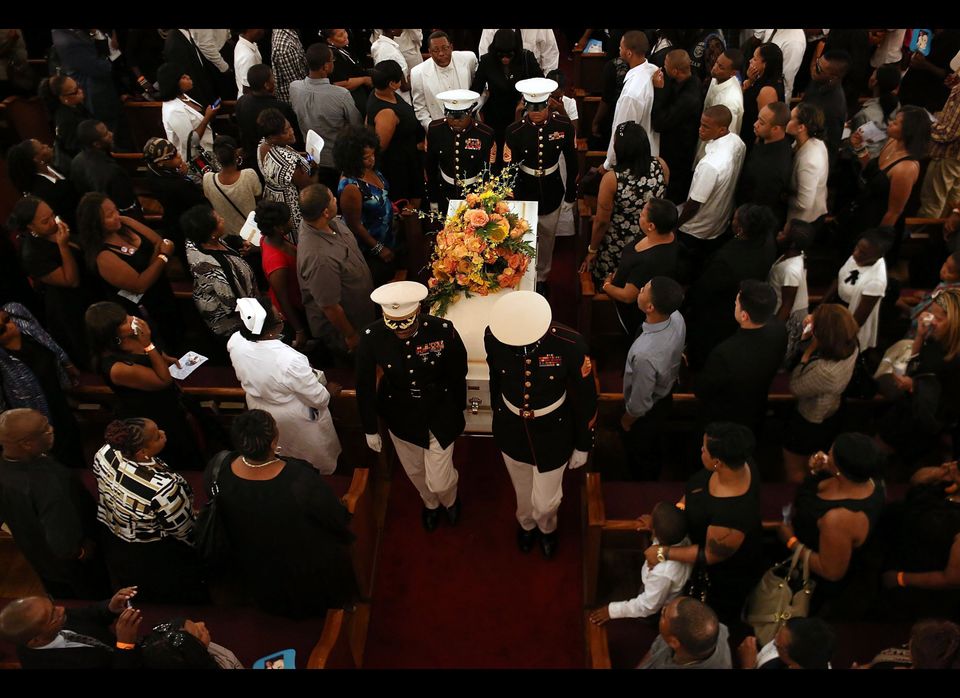 1 / 14
Harlem Youth Marines carry out the coffin at the conclusion of the funeral for 4-year-old Lloyd Morgan, who was killed by a stray bullet in the Bronx. (Photo by Spencer Platt/Getty Images)
Getty