It's been quite a week for Taylor Garrett, one of the "stars" of the new Logo reality show "A-List: Dallas," which premiered on Monday night.

After reports circulated that Garrett, a self-proclaimed Gay Christian Republican, dined with Ann Coulter and GOProud's Jimmy LaSalvia for an upcoming episode of the series, a rock with a threatening message was thrown through his window. Or so he tweeted.

But after The Huffington Post covered the story, many readers stated they suspected that the rock and broken window were merely part of a publicity stunt orchestrated days before the debut of "The A-List: Dallas." The fact that a police report hadn't been filed at the time the story was published and Garrett's subsequent removal of the tweet from his Twitter feed only fed suspicions.

But the story doesn't end there. Today Logo offered HuffPost Gay Voices a copy of two police reports (see slideshow below) filed after the incident and an exclusive interview with Garrett to discuss exactly what happened, why his police report wasn't filed immediately, why he removed his tweet, and more.

HuffPost Gay Voices: So, what happened last week?
Taylor Garrett: I was in LA last week filming with Ann Coulter. I got back late, late, late on Thursday night. I woke up to a knock on my door. It was our apartment manager and he told me that there was broken glass on my balcony. I didn't realize that my window had been broken because my window is double paned and it had only broken on the outside. I didn't realize it Thursday night when I got in. So the manager told me that he had filed a police report and the security guard that lives on site -- he's also a police officer -- was there and he said he put my information in the police report. So, I didn't call the police myself because they had already done it for me. Then, I called the detective to talk about it and they said, "Your name isn't on the report." And I said, "What?" So, that's when I called and made my own report. If [the person who did this] really is crazy and intent on hurting me and I went missing, I want a report with my name on it so there's a record of this.

The first report was made on Thursday?
Friday.

The Rock And The Police Report (interview continues below):

So, you weren't there when it happened?
It didn't happen when I was there. With that size of a rock, I would have heard it. I'm pretty sure it happened when I was in LA.

Do you have any idea who did it?
I don't. There's a group of people that have a hate website out on me. I don't think they did it -- who knows who did it? Obviously someone who doesn't like "twinkly Republicans" [laughs].

The language in the note was bizarre [see slideshow above for a photo of the note]. Parts of it seemed really antiquated.
I don't think a straight person would have written that because straight people don't use the word "twink," you know?

But I'm also not sure that a lot of gay people really use the word "nelly" to refer to themselves or each other.
Yeah. The last sentence was very disturbing to me. I could have dealt with it a little better if the last sentence wasn't in it, but with it, it makes me wonder if maybe they really are after me.

You tweeted about it, but then the tweet was removed. Why?
I tweeted about it the morning I found out about it. I was trying to deal with it in a humorous way and let it slide off my back. But then I started thinking about the seriousness of my own safety and Logo advised me to take it down. It had pictures of where I live. They also wanted me to pull it down because of the police investigation.

I noticed there was another tweet from John Hill, one of the "A-list" producers, congratulating you on the incident getting press coverage. That tweet also was removed. What happened with that?
I don't know. You'd have to talk to John about that.

So, pointblank: This wasn't a well-timed publicity stunt?
Absolutely not.

Tell me about your meeting with Ann Coulter.
I was approached by GOProud and we were discussing them hiring me as a consultant and I met with the executive director [Jimmy LaSalvia] in LA and he said, "We should introduce you to some of our higher profile board members." So that's why I had lunch with him and Ann. She's on the board.

What are your personal feeling about her?
I don't agree at all with any of her gay stances. I support gay marriage. I am very happy "don't ask, don't tell" was repealed. I admire her on her other conservative view points, like abortion. She's famous for being out there and I admire her in a way. But I want to make it clear: I do not agree with any of her views on the gays.

That being said, many are calling for a boycott of Logo because of Coulter's appearance on the show and there's a petition being circulated on the Internet asking the network not to feature her. What are your feelings about her being on the show?
It's a shame [that people feel that way]. We need to be able to have a civil lunch with people, even if we disagree. That's all it was -- a lunch. We need to be able to do that more in this country.

When we put up the story we got a lot of comments that accused us of falling for a publicity stunt. What was your reaction to the "community's" reaction to the incident?
It's actually made me very fearful because a lot of people were tweeting things like, "Too bad the gays don't know how to use guns and bullets instead of rocks." That's really scary. It has made me realize that I have to be a little more careful with my safety.

What are your thoughts on the LGBT "community" in general and how you fit into it?
I'm very comfortable with myself. I think a lot of people in the community don't want me to have a part of it because a lot of them don't agree with my political position. This goes to show you that the gay community advocates for diversity and is against bullying, but in our own community we discriminate based upon if you're a Democrat or a Republican or if you don't necessarily fit within the mold of the political views of the gay community.

What did you learn from this incident?
I learned that a lot of people in our community are very intolerant and that I have to watch my back a little more. 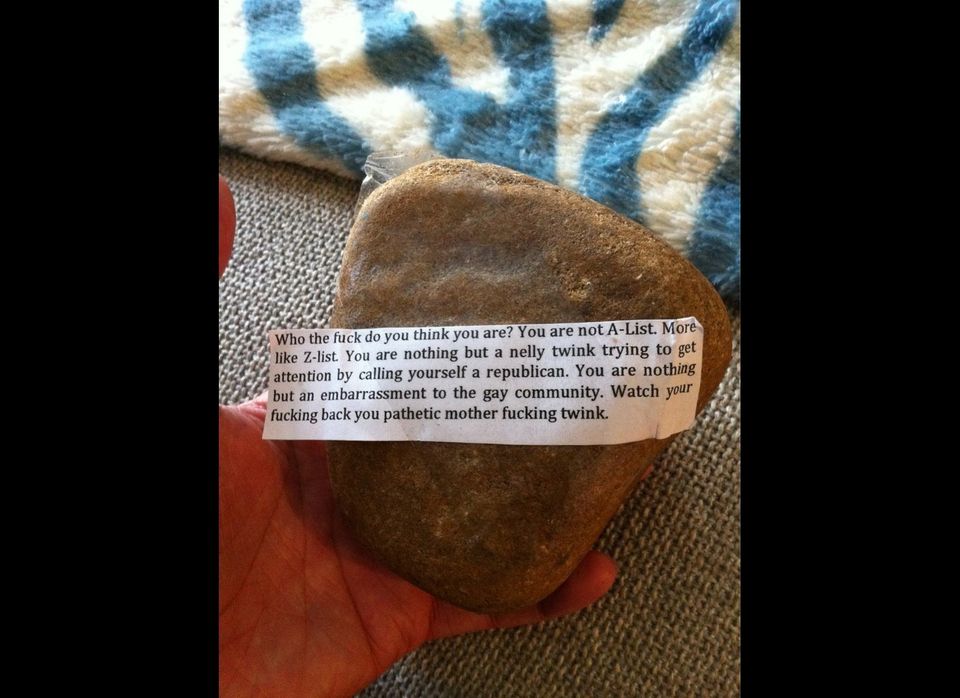 1 / 8
The Rock And Note
The rock and note that Garrett says was thrown through his apartment window.