The users of 4chan are sharp. So sharp in fact that they may have uncovered a celebrity lurking in their midst. The site that gave birth to countless memes and played home to the hacking group Anonymous delivers again. Maybe.

On Saturday, someone posted on Reddit an elaborate graphic which gives compelling evidence that Taylor Swift, the 23-year-old superstar, is a regular 4chan user. The image shows a series of posts and photos from 4chan's /b/ message board, an uncensored forum where users post anonymously, making the stitching together of this case all the more impressive. 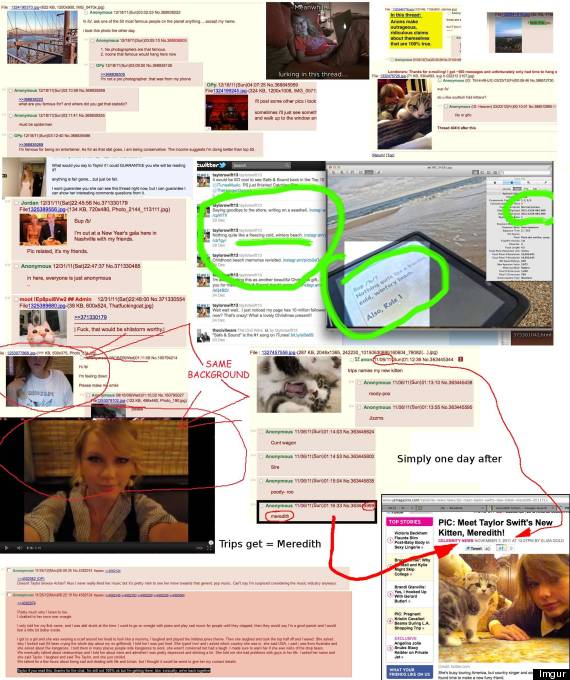 Exhibit A
A user invites the board to ask him/her questions, claiming they are "one of the 50 most famous people on the planet." After prodding, the user says they are famous for being an "entertainer."

Exhibit B
Similarities in photo backgrounds. One photo with a girl confirmed as Swift from a video she posted previously, and a second photo cut off at the eyes of an unidentified girl with a striking resemblance to the pop singer.

Exhibit C
A user posts "Sup /b/? Nothing quite like a freezing cold, wintery beach." That very same day, Swift posts this on Twitter:

Exhibit D
Perhaps the most compelling evidence: someone logs into /b/ and asks users to name his/her new kitten. The name Meredith is chosen. And boom, news breaks that Swift has just acquired a new kitten and its name is... wait for it... wait for it... MEREDITH.

Is this really Taylor Swift or just some user's very elaborate hoax? Each piece of evidence on its own does not prove anything necessarily, but when factored in all together, it makes a very interesting case. And since the theory arose, it has led to other questions about Swift's activity on the forum.

When a radio station sponsored a contest called "Taylor Swift's Biggest Fan!" in which one lucky fan would get to meet Swift in person, 4chan users united to sway the vote in the favor of a 39-year-old man named Charles Z. The man came in first in the voting, and the contest was cancelled after organizers declared the voting had been somehow compromised.

Did Swift know about this 4chan campaign ahead of time? Feeding the conspiracy theory, top voted Reddit commenter MistahNiceGuy aks, "What if she was the one behind #voteforcharles so she didn't have to meet another annoying screaming pre-teen[?]"

No, no, this is conspiracy theory 101, you have to think bigger and crazier. What if our world is just one big Taylor Swift performance piece for the universe and we're all extras?

Request for comment made to Swift's rep have not been returned at this time.