Early in 2014, there were rumors floating around that Lena Dunham was writing a reoccurring character for Taylor Swift to play on Girls. While Swift never made a guest appearance on the show, Dunham took on a full-time role in Taylor's life -- then squad -- as the country-turned-pop star's feminist guide. Through Lena, Taylor began to see herself as a feminist. The more she spoke on, not just being a public figure, but being a female public figure, the more feminism became Taylor's brand. 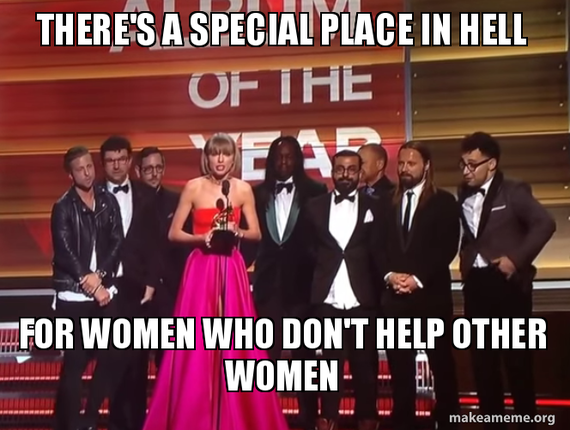 My first reaction to this was that I didn't want it to happen. Wasn't this the same woman who reinforced damsel-in-distress stereotypes with lyrics like, "Romeo, save me/I've been feeling so alone/I keep waiting for you but you never come..." and slut-shamed other women with lines like, "She's better known for the things that she does on the mattress"? Was this not the same woman who implied, very incorrectly, that Tina Fey and Amy Poehler were not *good feminist women* because they made a joke about Swift's dating life at the 2013 Golden Globes?

But a little time passed and I thought, okay, maybe there's something to Taylor Swift the Feminist (©Taylor Swift). For, whether or not they fully understand what the feminist movement was and is about, lots of young women are now unafraid to label themselves as feminists, and that's good, right? Taylor saying she's a feminist is destigmatizing feminism, and that's something we need, yes?

Turns out, not really.** Because Taylor's brand of feminism has very little to do with the actual political feminist movement. Furthermore, Taylor Swift the Feminist (©Taylor Swift) asks not what she can do for feminism, but what feminism can do for her. 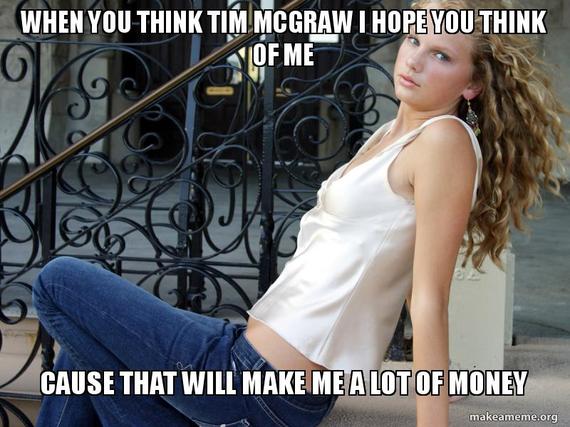 To say all you need to do to be a feminist is be a working woman (a boss, even) with a large group of female friends is to not understand feminism at all. It is almost the same argument made for Sarah Palin's brand of faux-feminism in 2008. Palin had ambitious goals and she worked for those goals, but Palin's politics were not in line with feminism. She did not fight for equal pay, nor did she believe in a woman's right to choose. She wasn't asking for gender roles in society to be reexamined and for lines to be redrawn more in favor of women. She was simply a hardworking woman (maybe even a sexist one).

Unlike Dunham, Swift has not publicly supported funding Planned Parenthood, Hillary Clinton, the Equal Rights Amendment, or any other piece of feminist legislature. She privately showed support to Kesha financially for her ongoing trial against her abusive producer and record label, but Swift made no public statement regarding the state of women in the misogynistic music industry she claims to want to change so badly.

This is because Swift supports issues when she can benefit from supporting them. Swift has built an image around working with women (see: her model friends in the "Bad Blood" music video), but when she accepted the Grammy for Album of the Year earlier this year, there were no female producers with her on stage. Swift is all about female friendship, except when a woman has dated a man she also once dated, like Camilla Belle, Katy Perry, Demi Lovato, or Kendall Jenner -- then the women are "buried," as her ex Calvin Harris recently put it, for the benefit, seemingly, of Swift's self-esteem.

Swift doesn't like it when the media talks about her writing songs about her exes, yet she's built an entire career on songs written about guys (and sometimes girls) she likes or dislike. Adele, Beyoncé, Miley Cyrus, Lady GaGa, Lana Del Rey and Perry all currently write songs about their love interests and relationships, but none make a guessing game out of their songs like Swift does. Still, Swift is the only woman to cry "misogyny" when writing about relationships is brought up in the press -- because it gets her more press.

What complicates Swift's brand of faux-feminism more is that she is white. We've all seen the Snapchat videos by now, we know Swift approved of everything except the word "bitch." But what does that really matter, coming from a young woman who has said her favorite song is Kendrick Lamar's "Backseat Freestyle," featuring the lyrics, "Goddamn I got bitches/Damn I got bitches/Damn I got bitches/Wifey, girlfriend, and mistress..."? How can you happily rap along to one "bitch" line, but condemn another? Especially when you've signed of on every word but bitch? The short answer is, you can't.

But Taylor's uproar about Kanye's use of "bitch" dredges up something worse: Stereotypes of the scary, powerful, and dangerous black man attacking the innocent and unsuspecting white girl. It plays on a fear that's been embedded in the white public's mind by the media for centuries. That black man will attack you, that black man will hurt you. What we need to recognize now is that this white girl was not only in on the game from the beginning, but she actually tried to turn everything against the black man when the opportunity presented itself.

While we wait to see how Taylor Swift moves on, the best thing we can do as a society is remove feminism from this whole debacle. Swift isn't in this position because she's a woman or a feminist -- she's "buried" because she acted as an opportunist and it backfired. Now like any man in a similar situation, Swift can only "face the music" of her dishonesty, and see if the public is willing to forgive and forget or not. That's true equality.

**Beyoncé's got it covered.