It's hard out there for a pop star these days to keep an air of mystery, considering constant pressure from fans coupled with the prevalence of social media and a general lack of privacy. Perhaps that's why Taylor Swift clung to the strange idea she needed to make the public wonder whether or not she has a belly button in a rather perplexing interview with Lucky magazine in December.

"I don’t like showing my belly button. When you start showing your belly button then you’re really committing to the midriff thing. I only partially commit to the midriff thing -- you’re only seeing lower rib cage. I don’t want people to know if I have one or not," she told the magazine, apparently laughing. “I want that to be a mystery. As far as anyone knows based on my public appearances, they haven’t seen evidence of a belly button. It could be pierced. They have no idea. If I’m going to get some sort of massive tattoo, it’s going to be right next to my belly button because no one’s ever going to see that.”

It's fine if Swift wanted the world to wonder if back in 1989 she was born with a hernia in her abdominal wall and subsequently had to have surgery effectively removing her navel (that's what happened to Victoria's Secret model Karolina Kurkova), but the public already knew that wasn't the case since Swift's 2009 music video for "I'm Only Me When I'm With You," featured home video footage of the singer in a bikini. And what do you know, she has a belly button. Not so mysterious. 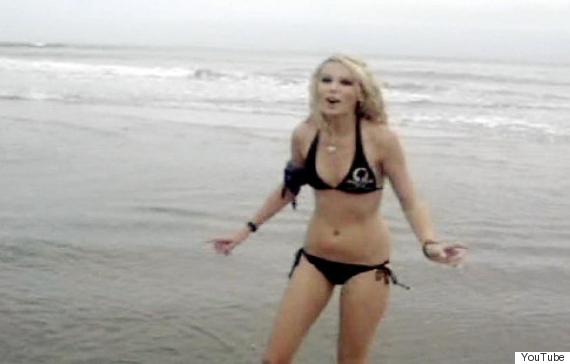 In an interview with BBC 1 Radio’s “Breakfast Show with Nick Grimshaw" on Tuesday, Swift discussed a recent photo she posted to Instagram featuring herself and the band Haim, posing in bikinis while on vacation in Hawaii, effectively "revealing" she has a navel.

But after creating such hype around the myth of her belly button, Swift knew there was a large bounty to be claimed for proof of its existence. The 25-year-old pop star explained that she's always on the lookout for the paparazzi, and knows how to “spot a lens … a mile away." On their last day of their vacation, Swift and her friends were out scuba diving in the middle of the ocean when they became smart to the fact they were being followed by paparazzi, who were allegedly on a fishing boat with "huge long-lens cameras."

Swift was in a predicament after all that talk about keeping her belly button a mystery, and she could hardly let the paparazzi take home a huge pay day for invading her privacy and ruining her air of mystique.

She told Grimshaw: "At which point, we go back to the beach and we realize, ‘Okay, so they got pictures of us in our bikinis, like I don’t want them to make like $100,000 for stalking us’… So we’re like, ‘Get up on the bow of the boat, we’re taking better bikini shots, so they don’t make as much money on theirs.'"

The lesson behind Swift's elusive belly button, which no one should soon forget, is that the singer isn't about to let anyone make money off the Taylor Swift brand if they don't deserve it -- just ask Spotify.