Taylor Swift wishes she were a young girl with a celebrity like Emma Watson to look up to.

Swift had nothing but praise for Watson while discussing the "Harry Potter" star's United Nations speech about feminism and gender equality on French-Canadian talk show "Tout Le Monde En Parle" on Sunday.

"So many girls out there say, 'I'm not a feminist' because they think it means something angry or disgruntled or complaining or they picture, like, rioting and picketing. It is not that at all. It just simply means that you believe that women and men should have equal rights and opportunities. To say that you're not a feminist means that you think men should have more rights and opportunities than women. I just think that a lot of girls don't know the definition and the fact that Emma got up and explained it I think is an incredible thing and I'm happy to live in a world where that happened." 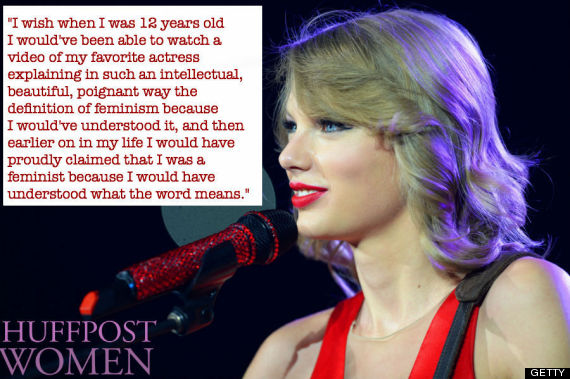 The 24-year-old said she believes the press is part of the gender inequality problem when it pits women against each other with polls like "Who's the Hotter Mama?"

"One thing that I do believe as a feminist is that in order for us to have gender equality we have to stop making it a girl fight," she said. "We have to stop being so interested in seeing girls try to tear each other down. It has to be more about cheering each other on as women."

Swift's take on feminism has certainly evolved over time. In 2012, when the Daily Beast asked Swift if she considers herself a feminist, the country singer responded: "I don’t really think about things as guys versus girls. I never have. I was raised by parents who brought me up to think if you work as hard as guys, you can go far in life."

In August, she explained to the Guardian that as a teenager she misunderstood the concept of feminism to mean "hating men." She credited Lena Dunham as someone who aided her enlightenment.

Watch Swift's full interview below. See discussion on women at the 10:16 mark.