Without any fanfare, Taylor Swift has reportedly made a big donation to help a family in need.

Texas volunteer firefighter Aaron VanRiper responded to a call this past Saturday about a head-on collision, only to find his wife Amber and 7-year-old son Jonathan seriously injured in the car wreck, KTRK reported.

Mandy Kibby, a family friend, set-up a GoFundMe page to help cover the family's medical expenses, as the VanRipers do not have health insurance. On Thursday, a donation of $15,000 came in from a certain "Taylor Swift." It has since been confirmed by Buzzfeed News and Billboard that the star was in fact responsible for the donation.

“I didn’t believe it at first,” Kibby told Buzzfeed News after seeing the generous star's donation. "This woman is amazing.”

Amber and Jonathan were injured after the mother's car had collided with an oncoming pickup truck, according to KTRK. In about four days, people across the internet, including Swift, answered the call to help the two and donated more than $101,500 out of the fundraiser's $125,000 goal. Though Jonathan was discharged on Tuesday, his mother still remains in the hospital, according to BuzzFeed.

While the pair is still recovering and both are expected to temporarily be in wheelchairs, the cause of the crash has not been announced. 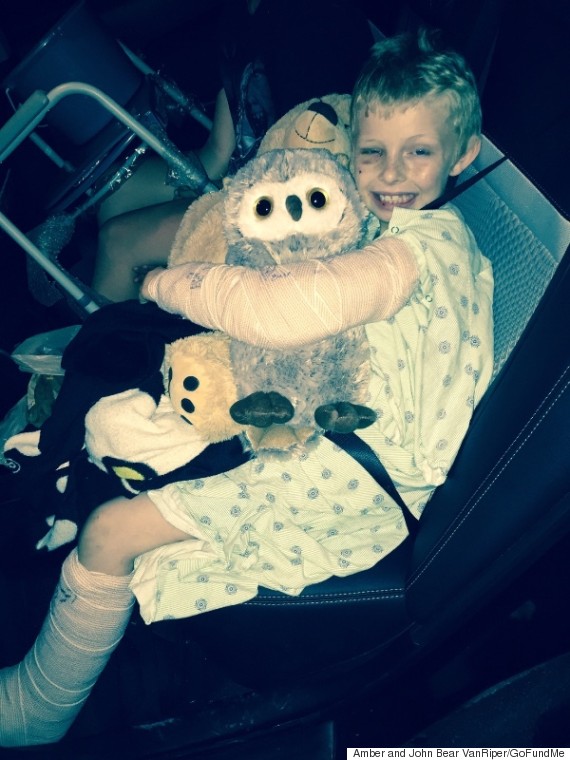 Jonathan, after the crash.

Swift has been known to give back. Earlier this year, Rebekah Bortniker, one of the singer's fans, made a mashup of Swift with her fans. To celebrate Bortniker's positive attitude, the star sent her fan $1989 along with some other gifts and note saying, ""Rebekah, now you're $1989 closer to paying off those student loans."

In another generous gesture, the star donated $50,000 in proceeds from her single, "Welcome To New York," to New York City's public schools back in February.

To help the VanRipers or donate, visit the GoFundMe here.