In what has become an annual tradition for us at Communitopia, we've put together a music video parody; "Break It Off" is a lighthearted Taylor Swift spoof, to the tune of "Shake It Off." It is about breaking up - but instead of starring a handsome, desirable suitor, this video calls for an end to our souring long term relationship with the fossil fuel industry and a transition to clean energy. It is also about some pretty terrible dancing. (Look for the macarena, Gangnam style, ballet, the 'cabbage patch,' and the electric slide - with cameos from the Green Ninja and a Pittsburgh local, the Green Beanie.) Oh, and kung fu! For reasons.

"Break It Off" challenges both the 'haters' who reject the science about climate change and the naysayers who like to loudly declare that we're doomed no matter what. In the U.S., we harbor a high rate of fatalism around climate change and what we expect the future to look like, given current environmental challenges. The Yale Project on Climate Change Communication reports that about a quarter of Americans think that even though we could solve global warming, we won't. Close to half of us fall into the 'wait and see' category, unsure if we'll make the changes we need or not. This optimism gap is something we need to address, because the only way we're going to get anywhere with our problems is if we believe that we can.

The truth is, we have already started to build a better tomorrow, with clean air, clean water, and a stable climate, transition away from fossil fuels, and create economic opportunities at the same time. It's true that we've got quite a long way to go, but the recent news that climate-change-causing pollution worldwide flatlined in 2014 while the global economy grew is an encouraging sign. That kind of evidence puts the lie to the idea that multiple benefits can't be achieved simultaneously. We need to work to make sure it happens more often. (It sure sounds a lot better than where we're headed if we stick with the toxic, climate-destabilizing energy industry we've got now.)

I found myself at a gas station on one of the frigidly cold days in the Northeast this winter. Just in case you were thinking that those low temperatures disprove global warming, observe how I live in pretty much the only colder-than-average place left on Earth: 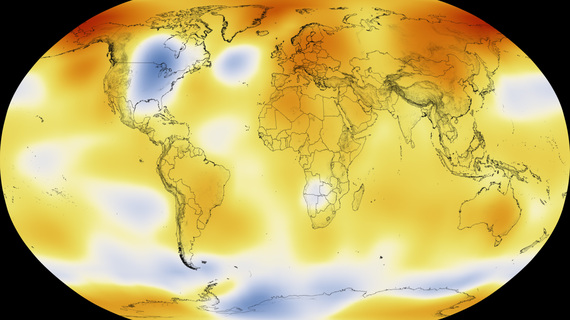 While I was filling my tank, I saw a guy taking a cigarette break across the street. I felt bad for him, thinking how terrible it must be to have an addiction so strong it forces you outside even when it's two below zero with windchill... and then I remembered that I was standing outside in the same arctic cold pumping gas.

President George W. Bush called us a nation addicted to oil, and he was right. Human society and fossil fuels have had a good run, and have accomplished a lot together, but it's time to face facts; we're incompatible in the long-term. Our latest video simply -and with gusto- makes the point that we don't have to stay in this unhappy relationship forever --- better options are out there, and the time is now to break it off.