Taylor Swift showed her love for Ruby Rose Saturday night when she surprised her actress friend at the GLAAD Media Awards.

Swift was on-hand to present Rose with the Stephen F. Kolzak Award at the Beverly Hilton Hotel.

"Tonight I'm here to honor someone who, through her words and through her actions, proves that she is a force of nature," the singer said before calling the "Orange Is The New Black" star to the stage. "She tells the world that no one can judge us and no one can stop us."

After receiving her award from Swift, Rose told the audience, “I’m just so blessed to have experienced both sides of this journey. To have searched endlessly for…someone I can relate to on TV – and then coming full circle and being in a show that I know has done the same thing for so many people.” She added, “I truly understand how important it is that we are not invisible. That young people everywhere can turn to the media and be included. Not treated like they do not or should not exist.”

The true story of how one 'sometimes girl' ( me ) was surprised and brought to tears by a surprise 'always amazing and giving' girl @taylorswift .. Speeches, hugs and the most beautiful jacket holder in the world. Coming to a screen near you. . . No I can't believe the passing of the coat was caught so magically.. "Are you sure Taylor?".. "I don't know.. I am really hot but also I don't think I can have you hold my coat" ... 😭😂😍

Tonight was EVERYTHING... Thank you @taylorswift thank you @glaad thank you to everyone who came out to be part of an amazing night. I feel truly blessed and humbled. I'm going to go cry and hold my pillow like a teddy now because I feel like I'm dreaming.

While Rose's star might have exploded last year with her debut on "Orange Is The New Black," she has been a face for raising awareness and visibility for gender non-conforming people since 2014, when she debuted her powerful short film "Break Free," which challenges binary understandings of gender.

For more from the 2016 GLAAD Media Awards, head here. You can also catch the show, which was filmed, on Logo TV tonight at 10ET/9C. 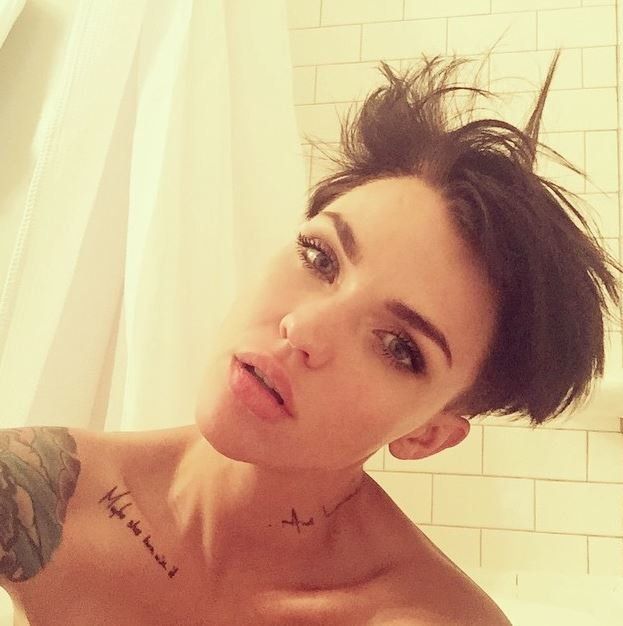