On Tuesday, the 25-year-old's Twitter account was breached by some folks who took the opportunity to give themselves a couple of shout-outs. 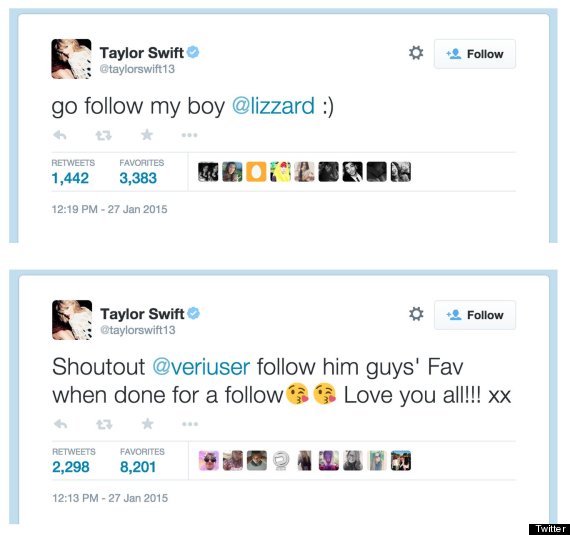 The hacked tweets were deleted about 15 minutes after they were posted, and The Verge reports that Swift's Instagram account was also compromised for a short period of time, as well.

A user by the name of @Lizzard, whose Twitter account has now been suspended, threatened to release nude photos of Swift in exchange for Bitcoin payment.

In his profile, @Lizzard claimed to be the "Leader of Lizard Squad," and a member of “LulzSec, Anonymous, UGNazi, ISISGang, GoP, globalHell, stc, zf0, htp, el8, GoD. lurk moar” located in North Korea (and as BuzzFeed points out, "Info from Dataminr seems to suggest his ties to North Korea could be legit").

"My Twitter got hacked but don’t worry, Twitter is deleting the hacker tweets and locking my account until they can figure out how this happened and get me new passwords. Never a dull moment," she wrote, before later learning news that her Instagram had also been hacked.

"Now Instagram. This is going to be a long day," she added.

Swift also didn't seem worried about threats from the hackers who claimed they would release her nude photos, as she later tweeted:

PS any hackers saying they have 'nudes'? Psssh you'd love that wouldn't you! Have fun photoshopping cause you got NOTHING.

UPDATE: Swift's YouTube account also appears to have been tampered with as a video that dubbed a Man-Cat song over her Yahoo premiere of "Shake It Off" was uploaded on Jan. 26. The video has has since been removed from the singer's account. Huffington Post Entertainment reached out to Swift rep for comment regarding the apparently unauthorized video.