Taylor Swift has proven once again that she always has time for a fan in need.

The Dover Police Department in Delaware started a social media campaign in May for 13-year-old Victoria Marsh, who has Down syndrome and is battling bone cancer. The kind cops rallied people to share a video featuring Victoria and her love for Taylor Swift, and to tag it #SwiftAWish in hopes that the singer would see it and visit the superfan. 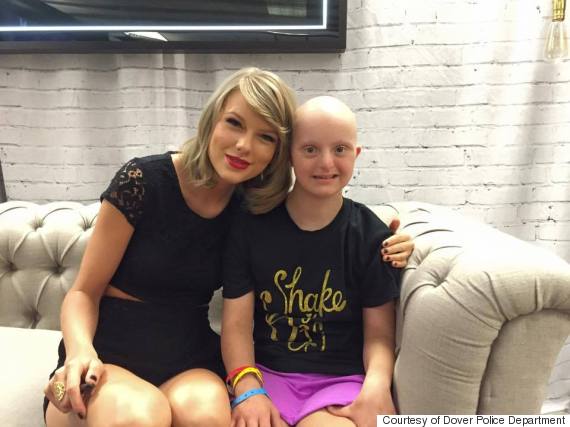 Their plan worked as Victoria's story caught the attention of Swift's managers, according to the News Journal. This past Saturday, the star met with Victoria backstage before her concert in Philadelphia.

"Victoria had a huge smile on her face," Karen Marsh, Victoria's mother, told the News Journal. "It meant the world to her." 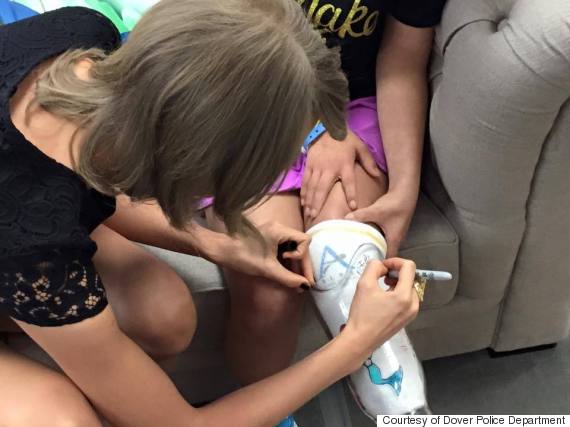 For the meeting, Victoria's doctors gave her special permission to leave the Nemours/Alfred I. duPont Hospital for Children, where she's been staying, for a few hours to meet Swift, Buzzfeed reported. At the meetup, the star hugged Victoria and took pictures with the teen and her family. Swift even signed the 13-year-old's prosthetic leg.

Victoria wasn't able to stay for the actual concert because she needed to return to the hospital, but Marsh says that night was by no means a disappointment. 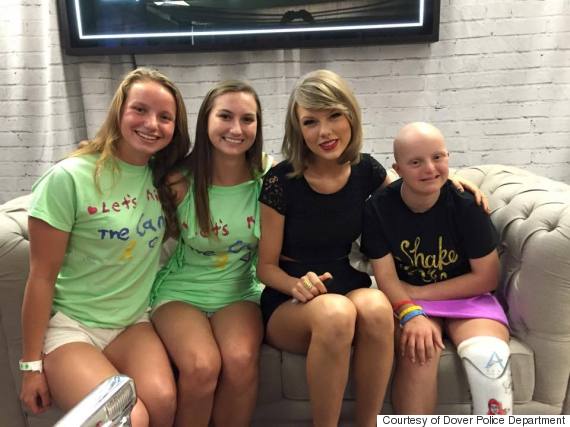 Swift with Victoria and her sisters.

“It was an incredible and very memorable evening,” the mother told Buzzfeed.

Marsh also told the News Journal that health-wise, her daughter is doing well, and will hopefully complete her treatment by October.

1
Taylor Swift
Vevo
Pretty famous pop singer. Kind of a big deal. Perhaps you've already heard of her.
2
Selena Gomez
Vevo
Singer of the criminally-underrated 'Love You Like A Love Song', 'Come & Get It' and 'Slow Down'. Used to go out with Justin Bieber, now going out with Zedd. Does anyone else reckon that wig is looking a bit Katy Perry-esque? Just a co-incidence, we're sure...
3
Joseph Kahn
Vevo
Of course, he's not actually in the video, but it's worth noting that Joseph Kahn has some pretty impressive music videos under his belt already, including Eminem's 'Love The Way You Lie', Britney Spears' 'Toxic', Gwen Stefani's 'The Sweet Escape' and... erm... Samantha Mumba's 'Baby, Come On Over'.
Advertisement
4
Kendrick Lamar
Vevo
One of the biggest rappers in the world right now, Kendrick contributes a guest verse to the 'Bad Blood' remix. He hit the top of the UK album chart earlier this year with his latest release, 'To Pimp A Butterfly'.
5
Lena Dunham
Vevo
The brilliant, Golden Globe-winning creator of the sitcom 'Girls', which she also writes, directs and stars in.
6
Hailee Steinfeld
Vevo
Hailee previously starred as the female lead in the 2013 film adaptation of 'Romeo and Juliet'. We're sure her Shakespeare background really helped her prep for her role as The Trinity, which largely involves staring at the camera and wearing a helmet.
Advertisement
7
Serayah
Vevo
When she's not putting a dent in a metal wall with her bare fist, Serayah is known for her role as Tiana in the critically-acclaimed musical sitcom, 'Empire'.
8
Gigi Hadid
Vevo
Gigi Hadid is best known for her modelling shoots in the likes of Vogue, Elle and Cleo magazines. Bizarrely, she's also put in several appearances on 'The Real Housewives Of Beverly Hills'.
9
Ellie Goulding
Vevo
Ellie's one of the stars we're guessing you have heard of, thanks to her UK hits 'Burn', 'Anything Could Happen' and her most recent chart-topper, 'Love Me Like You Do'. She also loves a good run.
Advertisement
10
Martha Hunt
Vevo
Best known for her modelling work as a Victoria's Secret Angel, Martha plays Homeslice in the 'Bad Blood' video, taking on Taylor Swift for a sword-fight.
11
Cara Delevingne
Vevo
If you have eyes and have left the house in the past 18 months, the chances are you've seen Cara Delevingne somewhere on an advert for something. You name a brand and she's done a campaign for them - Burberry, Topshop, D&G, DKNY... the list is truly endless.She's also a tabloid staple thanks to her high-profile relationships with the likes of Michelle Rodriguez, Harry Styles and the singer/songwriter, St Vincent.
12
Zendaya
Vevo
Zendaya is most popular with teenage audiences, who know he from starring in the Disney Channel shows 'K.C. Undercover' and 'Shake It Up', later appearing as the youngest ever contestant on 'Dancing With The Stars'.Away from the screen, she was recently involved in a high-profile media frenzy, when Giuliana Rancic was accused of racism over comments she made about Zendaya's appearance at the Oscars.
Advertisement
13
Hayley Williams
Vevo
Practically as famous for her bright hair as she is her music career, Hayley is the frontwoman of Paramore, responsible for hit singles like 'Still Into You' and 'Ignorance'.She's also enjoyed success as a solo star, featuring on B.O.B.'s 'Airplanes', as well as Zedd's 'Stay The Night'.
14
Lily Aldridge
Vevo
Another of Taylor's Victoria's Secret friends, Lily has also appeared as a swimsuit model in Sports Illustrated.
15
Karlie Kloss
Vevo
Recently stepping down from her work as a Victoria's Secret Angel, Karlie recently covered Vogue in a joint feature with Taylor.
Advertisement
16
Jessica Alba
Vevo
Star of the 'Sin City' series the video was inspired by, Jessica has also appeared in 'Fantastic Four', 'Machete' and, of course, the cinematic opus that was 'Spy Kids 4: A Dame To Kill For'.
17
Mariska Hargitay and Ellen Pompeo
Vevo
You probably know Mariska from her 17 seasons as Olivia Benson on 'Law And Order: SVU', recently playing the character in a crossover with 'Chicago Fire'.Ellen's most famous role is in 'Grey's Anatomy', where she plays the leading role of Meredith Grey.
18
Cindy Crawford
Vevo
Last but definitely not least, Cindy is one of the most iconic supermodels of all time, appearing in countless advertising campaigns and magazine covers across her decades-spanning career.
Advertisement