When 18-year-old tennis sensation Taylor Townsend beat 21st-ranked Alize Cornet in the French Open on Wednesday, she did more than simply extend her thrilling Grand Slam debut by advancing to the third round.

The 205th-ranked Townsend's feat -- it made her the youngest U.S. woman to advance to the third round at the French Open since 2003 -- is even more impressive considering just two years ago, the U.S. Tennis Association attempted to keep her out of competition at the U.S. Open. It was suggested they would not restore their support until the teen, then the top-ranked junior player in the world, lost weight.

"Our concern is her long-term health, number one, and her long-term development as a player," Patrick McEnroe, general manager of the USTA's player development program, told the Wall Street Journal's Tom Perrotta at the time.

The comments caused tennis superstar Serena Williams, who has also been criticized for her weight at times, to call the situation "obviously a tragedy, because everyone deserves to play."

"For a female, particularly, in the United States, in particular, an African-American, to have to deal with that is unnecessary," Williams told the Associated Press. "Women athletes come in all different sizes and shapes and colors and everything. I think you can see that more than anywhere on the tennis tour." 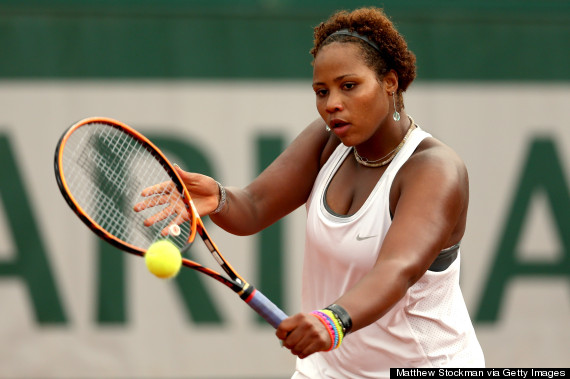 After the USTA controversy, Townsend stopped working with coaches from the association and now splits her time training with former Wimbledon runner-up Zina Garrison in Washington and former collegiate player Kamau Murray, whom she's known since she was 6 years old, in Chicago.

Both Townsend and Garrison say her negative experience with the USTA over her weight and fitness level have helped her improve -- both on and off the tennis court.

"It’s made her tougher. She’s very good now at taking that negative and turning it into a positive. You can’t help but grow up in that situation," Garrison told the New York Times this week.

“It helped me believe in myself more,” Townsend told ABC News of the criticism. “It also opened my eyes to say, ‘You know, you’re not going to look like everyone else.'"

The USTA reimbursed Townsend's mother for their travel costs to the 2012 U.S. Open, and Townsend and the organization have since reconciled.

Townsend, who entered the French Open as a wild card, was born in Chicago and her family still lives in the city's Englewood neighborhood. She will next face off with 14th-ranked Suarez Navarro of Spain in Friday's third-round matchup.