"The Navy SEALS removed one threat to America... The voters must remove the other," reads the billboard. About 25 of its critics met at the sign for the protest on Monday.

“I am highly offended at that sign,” Doris Stickel, a retired teacher and demonstrator against the sign told The Elkhart Truth. “It’s ignorant.”

“I think that’s rather out of line,” said Adam Bope, a local Occupy Elkhart member. “To take something that extreme, that’s pretty bad. [Bin Laden] killed how many people?”

The Tea Party group We the People of Marshall and Fulton counties funded the sign. The group's leader, Don Nunemaker, told The Elkhart Truth that the message was intended as a call for action on Election Day, although he declined to say exactly whom it is voters need to "remove."

Sue Chilberg, a local Tea Party activist, said she had no problem with the sign, since there was a real need "to do something about the very real threat of socialism."

Despite the local controversy over the billboard, protest demonstrations have occurred peacefully and largely incident-free.

Photo of the protest at the Tea Party billboard (Elkhart Truth photo by Larry Tebo): 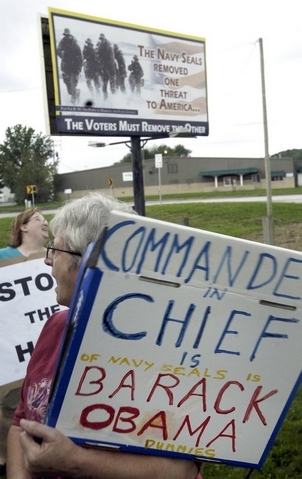