WASHINGTON -- As negotiations continue over raising the debt limit, Republican leaders are at odds with their own base, amid reports that their electoral coalition is breaking down. Public polling data illustrating the growing importance of the Tea Party vividly depicts the intra-party split and demonstrates the pressure Republican leaders now face.

Many national media polls now track the number of Americans who consider themselves Tea Party "supporters." As shown below, most now find between 25 and 30 percent of respondents fall into that category, with no consistent trend over the last year. 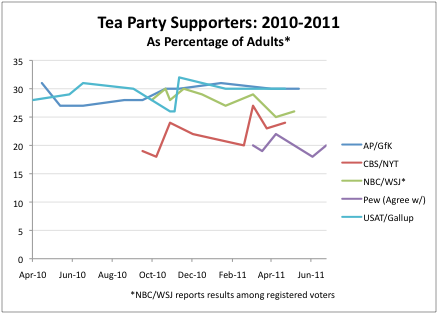 Republican pollster Bill McInturff has taken this measurement a step further in the polls he conducts with Democrat Peter Hart for NBC News and The Wall Street Journal. Since October of last year, their surveys have asked those who identify or lean Republican and consider themselves supporters of the Tea Party to choose the term that describes them better, between "supporter of the Tea Party Movement" and "Republican."

According to a presentation McInturff posted on his company website, in the NBC/Wall Street Journal surveys conducted in October 2010, this question split Republican voters into roughly thirds.

Although random sampling error causes these numbers to fluctuate slightly from month to month, the breakout of the two groups of Tea Party Republicans has remained roughly consistent in NBC/WSJ polls conducted during 2011: 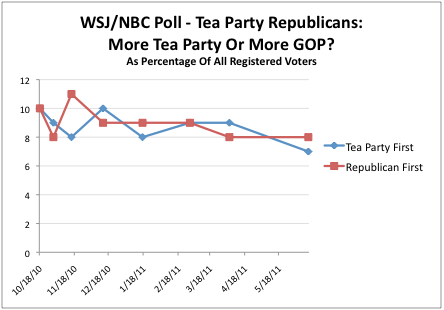 What makes this Republican segmentation interesting is the way it correlates with political ideology and attitudes about President Obama. In his presentation, McInturff also included the following results, showing huge gaps in the responses to three questions asked on multiple surveys during October 2010. 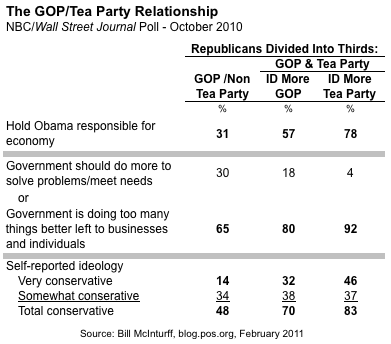 The Republicans who primarily identified themselves as members of the Tea Party were nearly monolithic: 83 percent identified as conservatives, 92 percent rejected government as a way to solve problems and meet needs and 78 percent blamed President Obama for the condition of the economy. The non-Tea Party Republicans were far less conservative (48 percent), with nearly a third open to government solutions (31 percent) and willing to give Obama benefit of the doubt on the economy (30 percent). The Republican-first Tea Party supporters fell somewhere in the middle.

At a Christian Science Monitor breakfast with reporters this past November, McInturff explained that while the Tea-Party-First group amounts to just a third of all Republicans, "they make up 40 plus percent of the primary vote or maybe higher, maybe 40 or 45 percent." Judging by their "issue positions and intensity," he added, "they are in a no-compromise stance. They don't want engagement with the president, they don't want to work across party lines."

Has any of that changed since last fall? McInturff was reluctant to share new tabulations for all three groups, since the number of interviews in each group in any one survey tends to be small and thus produce unstable results. However, he confirmed that both groups of Tea Party Republicans (those who think of themselves as Republicans first and those who think of themselves as Tea Party members first) tend to be more likely to vote in a primary, and they remain as heavily conservative, as opposed to government solving problems and as willing to blame President Obama for a failing economy as they were in October of last year.

While this approach to segmenting the Republican electorate is unique to the NBC/Wall Street Journal poll, their analysis can be confirmed and extended using similar questions about the Tea Party asked in a half-dozen surveys conducted by YouGov/Polimetrix since February and shared with The Huffington Post. (YouGov surveys are conducted online using an "opt-in" panel of respondents recruited to complete surveys, a methodology that is the subject of an ongoing debate in the survey world. In this case, however, the results are largely consistent with those from the NBC/Wall Street Journal poll.)

The YouGov surveys first ask respondents if they think of themselves "as a part of the Tea Party movement," and then ask if, "generally speaking," they "support or oppose the goals of the Tea Party movement." When combined with the standard party identification question, these measures allow for a similar segmentation that, like the NBC/Wall Street Journal groupings, splits Republican roughly into thirds:

These three groups also show similar attitudes: In the YouGov surveys, Republicans who think of themselves as part of the Tea Party movement are nearly unanimous in their disapproval of President Obama (97 percent) and their desire for the federal government to cut taxes (97 percent). Two-thirds (67 percent) also say they dislike Obama as a person. The Republicans with less affinity for the Tea Party also tend to disapprove of Obama and tend to favor tax cuts, but with significantly more dissent and far less intensity. 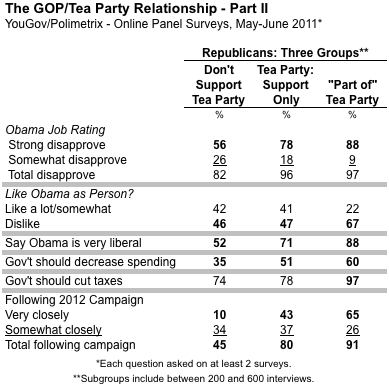 Taken together, these findings have important consequences for both the ongoing debate over raising the debt ceiling and the upcoming 2012 campaign.

First, the Tea Party wing of the Republican primary is the most attentive and thus most likely to turn out in next year's caucuses and primaries. These data imply that Tea Party-first Republicans will have a disproportionate impact in 2012.

Second, as McInturff observed in November, the strongest Tea Party-first Republicans are in no mood for compromise. They are the no retreat, no surrender wing of the Republican party. Their willingness to identify more with the Tea Party than with Republicans as a whole speaks to their desire to take stronger stands than they perceive the Republican party establishment as willing to take.

Third, and perhaps most important, the Tea Party-first Republicans are not some minor faction within the Republican party. They are the heart and soul of its base, the most active and committed Republican voters.

Last November, Bill McInturff referred to the Tea Party-first Republicans as his party's "special forces elite troops." The middle group, he said, "are sort of like the regular army, and the Republicans that aren't the tea party are kind of the support staff far from the front lines."

The Republican leadership in Washington is currently stuck between the rock of their activist base and the hard place of their allies and benefactors in the business community who fear the consequences of a government default. These polling data tell us that their dilemma will not easily resolve.