Nevada Republican Sharron Angle, who made an unsuccessful run to unseat Senate Majority Leader Harry Reid in the 2010 election season, lashed out at Sen. John McCain (R-Ariz.) on Thursday.

Angle, a Tea Party favorite, took aim at McCain on the heels of the Arizona senator criticizing lawmakers affiliated with the conservative coalition of activists who remain unwavering in their opposition to raising the debt ceiling. In speaking out on the matter on the Senate floor on Wednesday, McCain read from a Wall Street Journal editorial offering a critical assessment of how some members of the Republican party have approached the pressing fiscal issue. Here's an excerpt of the piece concerning Angle:

...The idea seems to be that if the House GOP refuses to raise the debt ceiling, a default crisis or gradual government shutdown will ensue, and the public will turn en masse against . . . Barack Obama. The Republican House that failed to raise the debt ceiling would somehow escape all blame. Then Democrats would have no choice but to pass a balanced-budget amendment and reform entitlements, and the tea-party Hobbits could return to Middle Earth having defeated Mordor.

This is the kind of crack political thinking that turned Sharron Angle and Christine O'Donnell into GOP Senate nominees. The reality is that the debt limit will be raised one way or another, and the only issue now is with how much fiscal reform and what political fallout.

Angle hit back at McCain in "A statement from a 'Tea Party hobbit'."

One man in Washington, who chose Sarah Palin to be his VP running-mate and came to Nevada to campaign for me last year in the Senate race against Harry Reid, is now promoting attacks against Tea Party activists, ordinary American citizens, and fiscally conservative members of Congress -- all of whom are adamantly opposed to continuing the deficit-spending strategies proposed by some congressional members and the president.

Ironically, this man campaigned for Tea Party support in his last re-election, but now throws Christine O’Donnell and I into the harbor with Sarah Palin. As in the fable, it is the hobbits who are the heroes and save the land. This Lord of the TARP actually ought to read to the end of the story and join forces with the Tea Party, not criticize it.

The Tea Party favorite added, "It is regrettable that a man seeking dialogue, action and cooperation for votes on the floor of the United States Senate has only one strategy to achieve that effort: name-calling. Nice."

McCain did in fact campaign for Angle last year during Nevada's general election Senate race. Below, a picture of the pair of Republicans in what can be considered more amicable times. 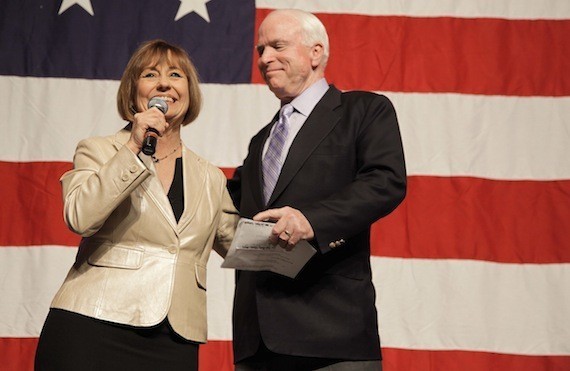