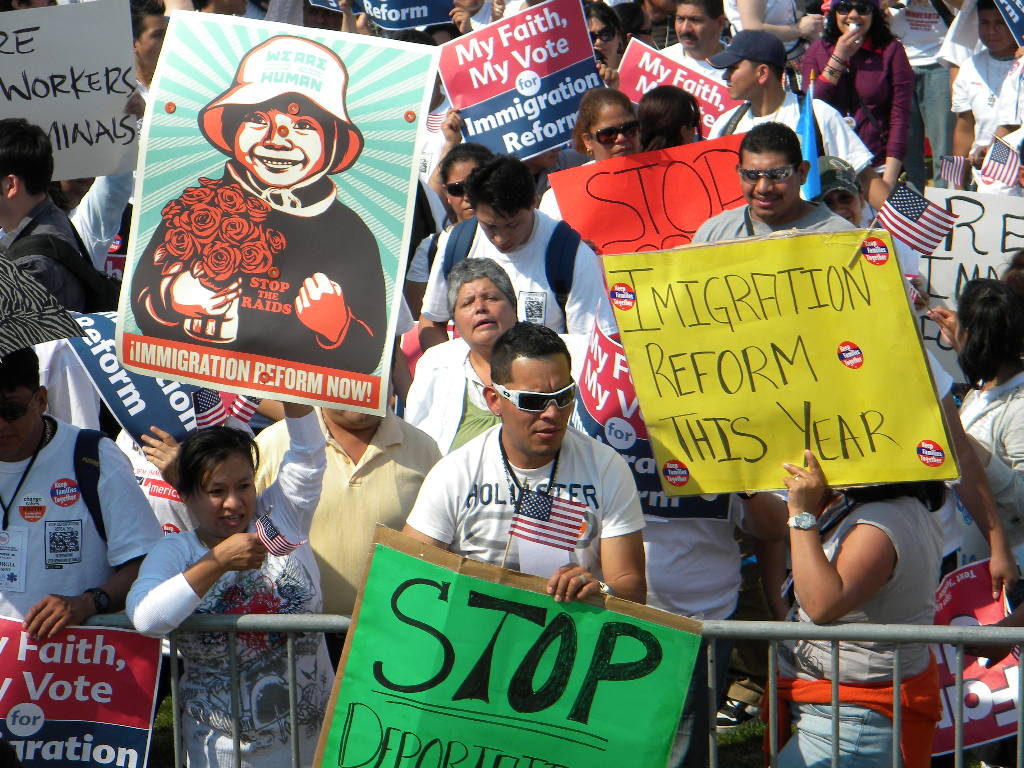 I was in Washington, DC this weekend to attend the national demonstration in support of comprehensive immigration reform. The rally had been planned months in advance, but as luck would have it, it fell on the same Sunday that members Congress were casting their final votes on the health care reform bill.

The health care vote attracted other rallies that day. People known to the world as Teabaggers, members of the so-called Tea Party movement and their supporters representing the right conservative wing of the Republican party. Their mission: to stop the bill from passing.

These two seemingly unrelated but parallel demonstrations produced drastically differing images of America. Peacefully gathering on most of the mall were people calling for change, while in and around the capital building were people trying their hardest to stop change.

At the immigration rally, you could hear the crowd chanting, "Obama, escucha, estamos en la lucha!" and "Si, se puede" ("Hear us Obama, we are in the struggle!" and "Yes, we can!").

At the Teabagger rally, you could here them shouting "Kill the bill!" and "No! No! No!" while GOP members were yelling "Baby Killer!" on the house floor.

At the immigration rally, you saw a wide spectrum of races and ethnicities. Those attending were mostly Latino, but the rally also welcomed the participation of Whites, Asians, and Blacks who support a path to citizenship, reuniting families, and providing opportunities to students and veterans.

At the Teabagger rally, the monochromatic masses were spitting and yelling racial and homophobic slurs at Black, Latino, and openly gay congressional reps.

At the immigration rally, you saw unions, farm workers, students, church groups, and civil rights organizations. The rally was organized locally via radio stations and word of mouth. People even traveled on foot from Miami and New York in an effort to demonstrate their commitment to the event.

At the Teabagger rally, you saw GOP congressmen and aides in suits and ties egging on the crowd from capital building balconies. Most of the participants were organized by corporate sponsored conservative groups, and motivated by the misinformation from a news network run by a former conservative partisan and owned by a foreign conglomerate.

At the immigrations rally, the participants were expressing hope - hope that reform would reunite them with their families. Hope that they would be given the opportunity to fully contribute to society, and the hope that their sacrifices, including the sacrifices of those who have served in the military or have lost their lives defending this country, will not be in vain.

With the tone, make up, and character of these parallel American rallies being so different, it's not surprising how differently their efforts effected the intended audience - our elected officials in Washington.

At the immigration rally, dignitaries abounded. Church cardinals and civic leaders and celebrities mingled and added their gravitas to the participants. Senators and congressman made a point to break from the health care debate to speak to the crowd, and President Obama sent a video message to the 200 thousand individuals who were estimated to be there. His message was clear. He had heard their cry, and promised to make immigration reform a priority and introduce legislation this year. It was exactly what the participants wanted. The responses to this news included cheering, hugs, a peaceful march, and a long ride home.

At the Teabagger rally, the "leaders" who addressed the mob were caricatures firing punchlines like Representatives Bachman and Boehner. The bill they were rallying against was passed, despite the efforts of the hundreds (not thousands) of participants. The response to this outcome has been more talk of violence, threats against The President, and uncivilized communications to our elected officials via email, fax and phone. They have even thrown bricks at representative offices around the country.

I highlight these opposing images because soon enough, these two groups will collide. The national debate on immigration reform will come soon, and if the Teabaggers act as they have against health care reform, we can expect more vitriol, fear mongering, harassment and acts of violence. These so-called "Americans" will feel even less restrained against people they consider to be "foreign" or "illegal," deserving even less respect than they gave to our elected officials.

The media must pay more attention to the immigration reform movement. The lack of coverage of the immigration rally was pretty shameful, even considering the conflicting news stories and Sunday time slot. How a rally of two hundred thousand can receive mere passing mentions and generic type, while the hate-filled weekend of 9/12 (attended by a mere seventy-five thousand) got 24 hour coverage is beyond me.

More importantly, the people of our country need to decide which America they want to be. In one America, you have peaceful demonstrations welcoming change, and in the other, people ready to use violence and harassment to protect the status quo. One America holds on to hope, the other, a deep disdain for the institutions that serve them. One America looks to the future, the other tries desperately to stop progress at any cost.

This choice is going to have to be made soon, and that choice will shape the soul of our nation for the next generations and beyond.