On top of the shear panic unleashed by the spread of the Ebola virus from West Africa, an astonishing amount of ignorance has reared its ugly head. As some have commented, this ignorance may be more dangerous to millions of people than the actual virus, and the unfamiliarity could even make matters worse, by focusing our concerns in the wrong direction, and isolating people and places from technology, education, and healthcare.

When my family was getting ready to live in West Africa a few years ago, it felt like everyone would ask us about the animals -- but that part of Africa has virtually no exotic animals roaming around and "it's not the Lion King set!" as my then-11-year-old daughter would exclaim in exasperation. The other common reaction revolved around the astonishment that we were going to "Africa, Africa?!" "It's so far away." "I can't imagine ever going there." Or "That's my lifelong dream to go there" (often followed by a sigh that it would never happen).

In reality, people are going back and forth all the time, making the continents feel like they are closer together, and seven of the ten fastest growing economies in the world this year are in Africa. Yet popular media rarely cover that story, and instead often reinforce the pity and ignorance, from infamous pronouncements that "these countries they do not believe in traditional medical care..." (Actually, as many kids aren't vaccinated in wealthy pockets of Los Angeles as in South Sudan or Chad, among the poorest, most war-torn countries in Africa.) And a virtual army of emergency workers and law enforcement greeted a plane landing in LA from NY after learning a woman coming from "Africa" had been vomiting on the flight -- in reality she had air sickness (and a history of air sickness), and came from South Africa. But did you know: Johannesburg is farther away from Freetown, Sierra Leone than Dallas is from Lima, Peru, in the middle of South America.

Ignorance on such a basic level as each of these examples feeds prejudice, hurts economies that are actually rebounding from their own difficulties (e.g., bookings for safaris in East Africa are way down, let alone a standstill in West Africa's commerce and investment), and can fuel fanaticism by preventing personal relationships and trust from forming, not to mention the commentary on our global and geographic illiteracy.

This is all the more frustrating since this type of ignorance literally could be stamped out by kindergarten.

Next time you have an opportunity to teach or learn about Africa, consider these points: 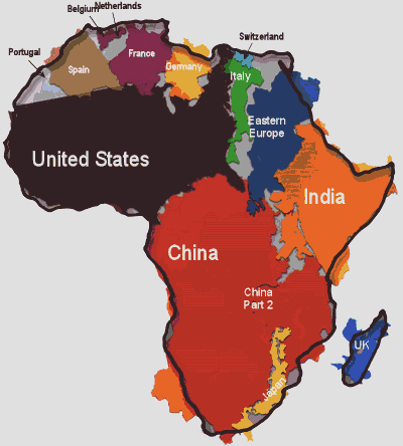 What are some of your favorite ways to dispel myths about Africa? Do you have a favorite book, resource, recipe, or song to recommend? For more terrific global education resources, tune in November 17-21 for the Global Education Conference, completely online and free to all. If you miss a session, like Homa Tavangar's keynote, all sessions will be archived.

The suggestions in this piece are derived from The Global Education Toolkit for Elementary Learners, which includes many more ideas for lesson planning, technology integration, classroom and school-wide projects, parent engagement and service-learning.