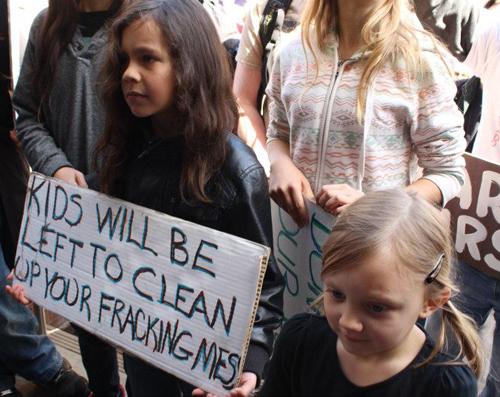 At Evergreen Middle School near Denver, Colorado, young members of Earth Guardians made a presentation and sang a rap which has infuriated local parents and brought angry threats upon the school and the youth. Some are calling it "liberal indoctrination" others calling it "censorship," the school has apologized, and what started out as a simple presentation by 13-year-old Xiuhtezcatl and his 9-year-old brother Itzcuauhtl has turned into a national story. The youths presentation included a rap that they wrote about the dangers of fracking stating, "poisoned the water, poisoned the air, poisoned the people, do you think that's fair?" and included a call-and-response for the students, "When I say what the, you say frack. What the... frack, what the... frack."

Earth Guardians is an organization started and run by youth (most under 13 years old) whose mission is, "...to educate and assist youth in becoming active caretakers of our precious earth, and to empower them in becoming outspoken environmental leaders, both locally and globally." Earth Guardians achieve their mission through nature programs, environmental education, message-driven performances and community activism. From their website, "Earth Guardians provide youth with the knowledge, tools, and leadership qualities needed to envision and shape a healthy planet, one that we can all be proud to pass on to our next generations."

A local teacher had learned about Xiuhtezcatl and Earth Guardians through a film produced by Peter Gabriels organization, Witness, and she thought that a presentation would be inspirational for her students. Witness features youth activists and promotes video advocacy. The short video focuses on our Public Trust, and the governments responsibility to make sure our air and water is protected while highlighting the work of Xiuhtezcatl and Earth Guardians.

Though natural gas burns cleaner than other fuels, the process for extracting it, known as fracking, is harmful to the air and the water. Toxic Trespass occurs when hazardous materials used on one property become airborne, or seep into the water-supply and drift (or trespass) from one property to the next, or enter our bodies without our consent.

Michael Green states in his recent post, Fracking, Health, and our Chemical History:

Though fracking companies keep their chemical use secret, a 2011 study identified more than 600 chemicals used in fracking. Many of these chemicals have never been fully assessed for health risks, but 353 were frequently cited in scientific studies. Twenty-five percent of these 353 fracking chemicals were linked to cancer and mutations; 40-50% can affect the brain/nervous system, immune and cardiovascular systems; and more than 75% can harm the skin, eyes, and respiratory and gastrointestinal systems.

The study also found that 37% of these 353 fracking chemicals could disrupt our bodies' natural hormones, with impacts on sexual development, reproductive health and fertility. Health problems from these substances, called endocrine disrupting chemicals, can manifest at different stages of life - from neonatal and infant periods to the aging adult. Some endocrine disruptors can even have health impacts across generations...

The health of our democracy depends on an informed and active public, yet the content of what is taught or talked about in schools is often disputed. The oil and gas industries have the money to buy television ads, lobby our politicians to reduce EPA regulations, hire lawyers and public relations teams to tell us that fracking is safe. Does this make you feel safe? Are we truly informed when the ones informing us have a vested financial interest in the story they are selling us?

"When your kids lives are in danger, do you stop to ask the government permission to protect them?" - Julia Butterfly Hill

ABC 7 News in Denver has reported that, "The district told 7NEWS it plans to distribute pro-oil and gas literature to parents so they have information from the other side." Though students deserve to hear a balanced story, pro-gas marketing materials will not refute nor answer to the concerns of a growing number of citizens. If the chemicals they are using are safe, then why do they refuse to disclose what they are?

We all need energy, we all use various forms of gas and energy that involve varying degrees of risk for us and our environment. Accurate information about the risks is necessary to determine the cost to our environment and peoples health. The thought of censoring objection, or burying questions and concerns with glossy marketing materials defies the principles of critical analysis. The price we may pay in the long run with damage to our environment from these chemicals may be too much, but those with money to make in the short term don't want to have a conversation with full disclosure about potential risks.

An uninformed democracy fails. When elected officials are beholden to lobbyists and financial interests above the health of the people, that is when people of all ages and backgrounds should be taking a stand and asking questions. In Colorado we have a collection of courageous young Americans leading the charge.

You would think that people would applaud them, but that's not the case. The threats, insults, and harassment of these youth and their friends on The Earth Guardians Facebook Fanpage have been so inappropriate that some of the kids mothers have spent the days reporting and deleting hateful comments. Unfortunately in America, we have come to expect slander and character assassination when there is no other intelligent or factual response to someone that has exposed a hidden truth. When the anger and verbal aggression of adults is directed at a group of children through an internet site, it crosses a boundary and becomes bullying. I can't think of any instance where bullying children is appropriate...

I spoke briefly on the phone with Xiuhtezcatl and he was more articulate and confident than most adults. He spewed more facts at me than I could keep up with and when I asked him what he felt about all of this he responded, "Obviously they are targeting a 13-year-old boy because we are speaking the truth. What they don't realize is that it's gonna effect their kids too if we don't do anything about it."

He told me that he does research on the internet, goes to conferences and learns as much as he can about the science because, "We are fighting for the survival of our generation and the health of the waters, the air, our community. We are fighting for kids everywhere."

This controversial rap might just become the next hit single among youth across the country. At the request of the school district however, the video of the two singing at school has been removed. I'm sure that it will resurface again and again as Earth Guardians gain momentum and acclaim for their creative use of media, activism, and music. Below is another popular tune by Earth Guardians called, "Act as if Our Future Matters."

Let us take their advice and live as if it matters. Let's remember that our young ones are watching and we have a responsibility to be role models, support their expression and give them a voice in their future. In the case of The Earth Guardians, perhaps adults can learn a little from these kids about speaking up for the safety of our communities, the air, and the water.