The incident occurred Tuesday when the unidentified teacher turned on an overhead projector during a first-period class at J.C. Harmon High School.

When the projector came on, students saw a pornographic snap shot of a naked woman in a compromising position from behind.

Thinking quickly, a female student took a picture of the offending photo with her phone, RawStory.com reports. 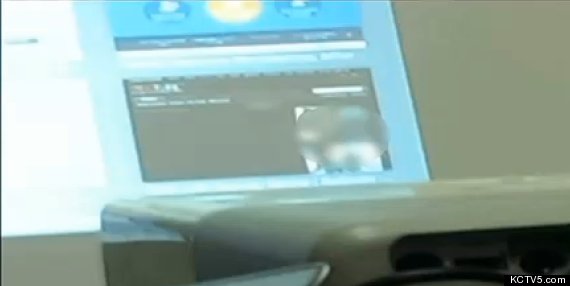 The student shared the picture with her boyfriend who forwarded it to a friend. A few hours later, the picture debuted on Facebook.

The girl who took the photo and her boyfriend were suspended for two days by school officials for "inappropriate use of electronics," according to the girl's mother, Lori Lester.

The boy's mother, Karen Winkel, has a theory why her son was suspended.

"I believe my son got in trouble because the school was trying to hide something," Winkel said, Kansas City TV station KCTV 5.

The teacher is currently on paid administrative leave while the matter is investigated.

Meanwhile, Lester and and Winkel have been trying to meet with administrators and convince them to reverse the suspensions to no avail, according to Fox News.