An elementary school teacher in Uruguaiana, Brazil, creates alternate versions of beloved fairy tales, and asks her students questions like the above to teach them about complex issues like sexual abuse, romantic relationships, gay rights and misogyny. During one of her fourth-grade classes, Sandra P. (her name has been changed) read “Sleeping Beauty” to students. They later watched the Disney movie “Maleficent,” which shows a different version of the classic fairy tale. The teacher then compared the two stories -- and one of the students brought up the issue of the kiss that awakens the princess. In the movie, the kiss is given by the fairy godmother, whereas in the fairy tale, it is the prince who gives it. "Watching the movie’s surprising ending, I had the idea to discuss these issues with my students in the classroom, and the results were very positive. They asked questions and talked openly about the subject. I always try to make my students discuss what they see and read," Sandra said in an interview with Brasil Post.

‘Couldn’t the princess’ mother’s love be true as well?’ ‘Does only the prince’s love count?’ and ‘Why can only men save women?’ were some of the questions the students asked, Sandra said.

Their classroom work actually ended up on social media earlier this year, where it was shared over 13,000 times:

This poster depicts the results of a fourth-grade class vote about “Sleeping Beauty.”

Text: Is it right to kiss a princess while she is sleeping? (Class 4A) 2 votes - Yes // 13 votes - No Answer: Nobody deserves to be kissed by a stranger while sleeping. That's a crime!

BrasilPost tried to contact the teacher at the time, but due to some offensive comments she had received via social media, Sandra declined an interview. Now, more at ease with the response to her work, she tells BrasilPost that she “has agreed to talk about it so that other educators can use [her] idea and develop the same kind of class work with their students in other schools."

The idea of using fairy tales to discuss serious issues came to her last year. “I have also worked with a version of a fairy tale where the princes were gay, to talk about homophobia, which is another major social problem nowadays,” she says. Her project is named “A different look at fairy tales” and is supported by the school where she works. “I believe that the creation of a fairer society begins in the classroom and with children, since they’re very young. Teachers must always ask themselves: what kind of citizen am I helping to form?” noted Sandra. 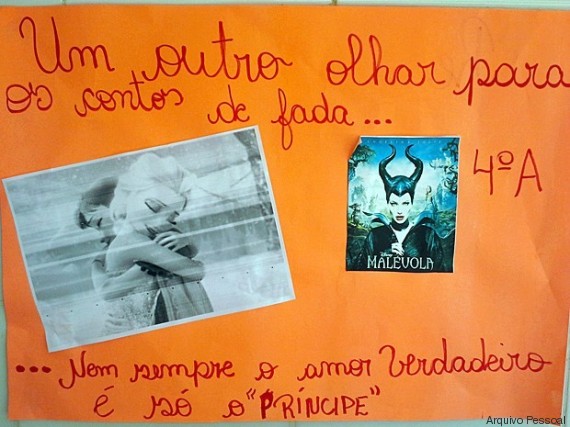 Translation of poster: Another look at fairy tales… True love is not always about the "prince"!

To discuss gender issues, Sandra used the movie “Frozen,” establishing a parallel with Maleficent’s story. In both tales, it is clear that true love isn’t always found with a man, as many fairy tales teach, but can be found in any other person, regardless of gender. “It doesn’t help if I close my classroom’s door and build a new universe inside it when there is another one out here, full of serious social problems. Educators can’t ignore the reality of the facts; we must face it and always search for the best way to change it,” said Sandra.

In response to her work, Sandra has been called a “femininja” on social media -- for being one among many women who fight for feminism and for a fairer, more egalitarian society. She agrees: “I don’t accept the model of a patriarchal society and don’t feel like I belong to it. And I fight every day to change the situation a little. I know it’s tough work with no end in sight– but we are many, and we are strong.”

This piece was originally published on the Huffington Post Brazil (BrasilPost) and was translated into English.

The Right ― And Wrong ― Way To Apologize To Your Kids