Khmer Ceramics and Fine Arts Center is a leafy, open air space in Siem Reap. Located just meters from the well-manicured lawns of the National Museum, the Center was established in 2006, and has since built a solid reputation on the tourism circuit. Now in the year of its tenth anniversary, it serves as a workshop, a showroom, and most importantly, a school teaching Cambodia's ancient ceramic arts.

"We preserve art by making it," Sam Navarro said. A native of Montpellier, France, and ceramics expert, Navarro has served as the chief marketing officer at Khmer Ceramics Center since 2013. "When I first met Serge, our CEO, I was in Cambodia to learn about traditional handicrafts. I had no intention of going into this field. But I fell in love with the ceramics, and decided to take a post here. I was surprised by how complex the tradition is, and how our modern world is built on ceramics." 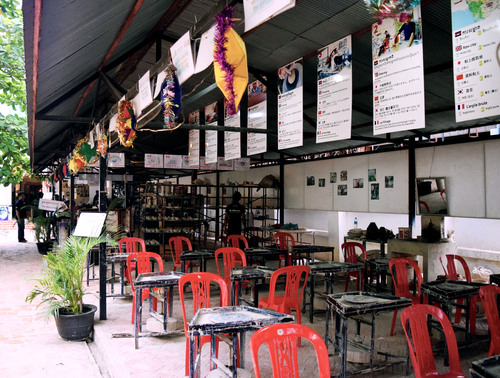 Today, seventy-seven local people work at Khmer Ceramics and Fine Arts Center now, many of whom are deaf or hearing impaired. Through the social enterprise, they aim to share the artistic legacy of Siem Reap with the world, and increase an appreciation for the Khmer aesthetic.

Each day, tourists visit the Center to cure Siem Reap's infamous "temple fatigue." Families are often seen at the wheel, spinning tan clay and following the directions of local instructors. Beginners use sharpened sticks to carve traditional kbach, or ornamentation, on their pottery. These ancient symbols are famous for being carved into Angkor Wat, The Bayon Temple, and Bateay Srei.

But locals and expats have started attending the Center to learn the craft, too. Early this year, the Center also features a membership program for artists looking to study long-term. When asked why the membership program was created, Mr. Navarro simply said: "Because we think it's cool for people to learn pottery! Plus, for expats, there's not much to do except visit the temples and go swimming at the local pools. But this offers something artistic." Membership plans stretch from three to six months. Local artists can use the wheel for an unlimited amount of time each day, use a select gray glaze for their work, and can fire one piece free per day. Local Khmer instructors are available on site.

One of them is Pom Pim, who has taught at the Center for two years. Because he communicates with sign language, his pottery teaching method involves students closely examining his hand motions, and then mirroring them. He has become a popular instructor. "I really enjoy my job," he said through an interpreter. "I've developed a deeper appreciation for arts while working here." 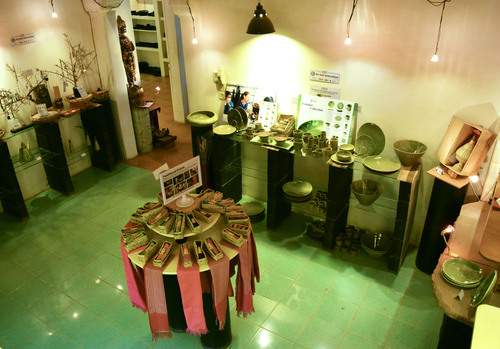 A view from the gallery stairs

Today, Pom Pim teaches, creates dinnerware on the pottery wheel, and paints large Buddhas made of tamarind wood. The lacquered figures are later shipped overseas, where they decorate the interiors of restaurants, hotels, and cultural centers. Soon, the Center hopes he can begin working on a dinnerware line that will be marketed in the United States. "I hope to keep working on the project," he added.

During the Khmer Empire, most ceramics were designed only for ceremonial use, which is why not much dinnerware exists. More emphasis was put on tiles, teapots, totemic animal figures, and other items of religious significance. Monks and kings preferred intricately-carved pieces, which gave Cambodian art the style it is known for today. As tourism in the country expands, more people around the world are coming to appreciate the intricate carving style they find on temple walls.

In 2007, the Center capitalized on this growing global interest by organizing the first International Khmer Ceramics Festival. The theme of the conference was "Ancient Khmer and Southeast Asian Ceramics: New Archaeological Findings, Production and the Revival of Techniques." After its success, a second conference was held in 2008. One attendee, Dawn Rooney, later wrote a book entitled Khmer Ceramics: Beauty and Meaning. The text has now become a go-to guide for those interested in Southeast Asia's art history.

As their first decade in business ends, The Khmer Ceramics and Fine Arts Center looks to forward expansion. "We even want to acquire land and turn it into a sustainable forest, so that we can begin firing our kilns with wood," Mr. Navarro said. "It would protect the environment and provide jobs for people living in rural areas. We have so many plans for the future...I'm excited to see how we grow in the coming years."