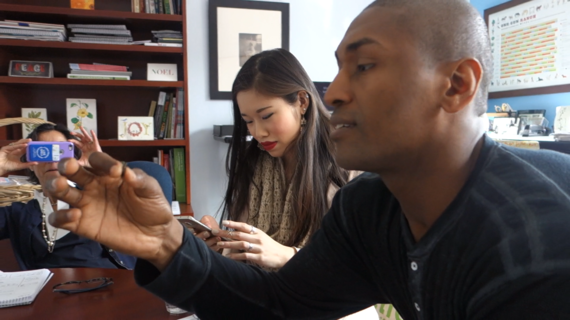 "Do they have a lot of protein?" asked Lakers basketball star Metta World Peace as he inspected one of my crickets.

I paused. He was looking directly at me.

This was the lucky end to my day of toting around a grocery bag full of roasted crickets to help teach about entomophagy, the consumption of insects, at UCLA. That morning, I had given a lecture called "Why Not Bugs?" in my freshman environmental science class, "Food: A Lens on Environment and Sustainability," in which I'd asked the students to record one another on their smartphones as they ate a cricket.

Then I had trolled the campus with the leftovers like a second-grade boy high on life (or maybe crickets), daring anyone I knew to eat one. Dr. Wendy Slusser, director of the UCLA Healthy Campus Initiative and Arianna Huffington's ally for the #SleepRevolution, I knew to be a foodie, and so it seemed natural enough to stop by to offer her a snack. She happened to be recruiting guest speakers for a major campus event on sleep and health when I arrived, including Metta World Peace. And I must admit, I thought very quickly that a video about entomophagy would have more reach with Metta World Peace in it than not. So I made my pitch...

The case for eating bugs
The case for eating insects is old and compelling, trending in the US since the publication of the Food and Agriculture Organization's Edible Insects: Future Prospects for Food and Feed Security in 2013. Humans have been eating insects for thousands of years, and over two billion people from all around the world still do, mostly concentrated in the tropics zone where the cold-blooded critters are plentiful.

Insects are packed with proteins, minerals, and healthy fats. They're important pollinators. Compared to other forms of animal agriculture (cows, pigs, fish, and probably chickens), raising certain species of insects in appropriate conditions takes just a fraction of the food, water, and land. Insects can consume organic waste streams that currently end up buried in landfills and producing greenhouse gases. And raising certain species of mealworms at home is also relatively inexpensive--potentially a small business opportunity in warm weather locales with high rates of food insecurity.

While I would hesitate to say that insect consumption the holy grail of sustainable living (there's a lot of regulatory work, organizing, and research yet to do, and it's just a tiny part of a much bigger set of problems), entomophagy is nonetheless a practice that the environment and sustainability movement should take seriously. It dovetails well with living small, reducing consumption, healthy eating, and getting out of cars.

Bugs on film
But in the words of one of my students, "bugs are gross." Eating insects is just not a part of the culture in much of the US, and so getting over the "ick" factor is a tall order. It is partly for this reason that entomophagy advocates see education as an important part of their mission. It is fortunate for a film guy like me that getting over disgust makes for good drama... (your cue to watch the video).

Your turn
So would you like to try an insect tasting and lead a discussion about entomophagy in your area? Or have a video made like this one with members of your group eating insects for the first time? Below are two opportunities for action!

Action 1: The leading entomophagy non-profit in the United States, Little Herds, is distributing Educator Packs of edible insects to schools that request them. Director Robert Nathan Allen plans to give out 200 free packs initially in a test run, and many more through the Little Herds website if there is interest in the future. These kits will have samples of insect foods, educational materials like infographics, pictures, handouts and curriculum ideas, as well as links to online resources like videos and websites. In his words: "Let us know which school you think would dig this idea and we'll add them to the list. It can be your kid's school, a family member or friend's school, or a school you teach at or attended...all suggestions are welcome. Send an email to LittleHerds@gmail.com and let them know why your favorite school should get the chance to try some bugs!"

Little Herds can also provide advice about how to procure insects in your area and lead a discussion about safe handling. Be sure to tell your group that people with shellfish allergies may also be allergic to insects.

Action 2: And if you would like to pursue a video project like the one you saw here, email me, Andy Rice, at whynotbugs@gmail.com. I will set up a Google Drive folder that you may share with your group, and you can upload your raw videos to it for me to make a short documentary about your collective experience of eating bugs to post to YouTube.

Envisioned and Supported by Jane and Terry Semel. Making the healthy choice the easy choice for UCLA students, staff, and faculty.