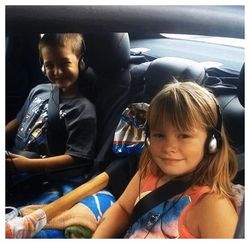 The faux grandkids have arrived. Actually, they're real grandkids. I'm the faux.

They are well-known for being pointers and diggers. They point at something and say, "What's behind there?" And if you say "Nothing", they know you're lying.

In the garage, behind something with nothing behind it, they claw out a 20-year-old Karaoke machine. Unfortunately, it still works.

Little fingers flick and poke. Something pops out. "What's this?" she asks. I forget for a second what it's called. "Oh, a cassette. Tape. It records things. Sounds."

He grabs it. The holes are the perfect size for nipper digits. Twisting sprockets is fun. And the weird flat string can be tangled around almost anything. "Can I have this?"

"Sure. Twist away," I say. He heads out the door, unraveling.

She wants to sing. "Will you turn it on?" The microphone is in her hand, on her mouth.

"Your brother walked away with the music."

"I don't think I have anything you can sing along with. Ask your grandmother."

"Yeah, but no Mitch Miller. Would you like Thelonious Monk, Mozart or Jimi Hendrix? Your grandmother has cowboy CDs you can sing along with. And someone named Michael Bubble."

Loudly, into the mic: "I NEED A CD." I'd forgotten how cheesy cheesy speakers sound. Luckily, I can't hear as well as I used to.

"Hold on. There's a radio in this thing," I say. I fiddle. The static is louder than the signal but I pretend everything is fine and Boogaloo backwards into the house. "Sing, sing, sing!"

At my computer, comfy. I hear the familiar rumbling on the stairs. They tumble in.

"Of music we want to sing."

"Where is this music?"

She rolls her eyes, huffs and points. "On the computer!"

A voice behind me. "What's in this drawer?" He asks, pointing.

He opens the drawer and digs.

"Music you like is not on my computer," I say to her. "It's out somewhere in the ether somewhere. So I'd have to download it. And I think that costs money, like 99 cents or something, unless you do it illegally."

She runs out of the room.

He has a container of Extra-Strength Tums in his hands.

"Then put those back. And stop rummaging around in there. You'll give me a stomach ache."

He smiles and hands me the bottle.

She's back with a dollar bill and holds it out.

Is this a sting? Have they been recruited by the FBI? I've heard of children turning in their parents for smoking marijuana. Am I being set up? Taking money for illegally downloading music?

I look around for any video cameras. The only one I find is just below the monitor. I put up my hands and shake my head. "No, I won't accept that," I say into the lens.

"No, no, no," I say, sliding the Tums over a few inches to block the camera. "That's entrapment."

"Do you have scurvy?"

"Then put those back."

She's still holding out the dollar bill. With the camera blocked, I feel safe enough to take the money and toss it on a chair. "I really, really don't want to go through the rigmarole of opening up some account with iTunes or whatever..."

She's mad. And hurt. Why won't ersatz grand-whatever do this simple thing for me...

"Tell me the name of the song and let's see if we can at least find it."

I type in the song title, hit enter. Lots of choices. I click one that says 'Download' and to my astonishment the song is being sucked up by my computer. Nothing is easier to do with mouse and keyboard.

"I've just destroyed the music industry," I tell her.

One song isn't enough. She needs two. Then because she has two, he needs two. I hear the Capitol Records building in Hollywood crumble and fall.

He's holding a bottle of Xanax in his hand.

"Are you feeling anxious, like the whole world is caving in on you?"

I'm finally understanding the concept of childproofing a home. It's not only making sure medications are out of reach, electric outlets can't be tampered with, windows on upper stories are secure -- but also not letting unsavory, Fagin-like adults promote and reward criminal activities.

As for me, I will live with this guilt for the rest of my life. No doubt, on my deathbed, in a fevered coma, my last words will be, "Forgive me for downloading Bruno Mars."