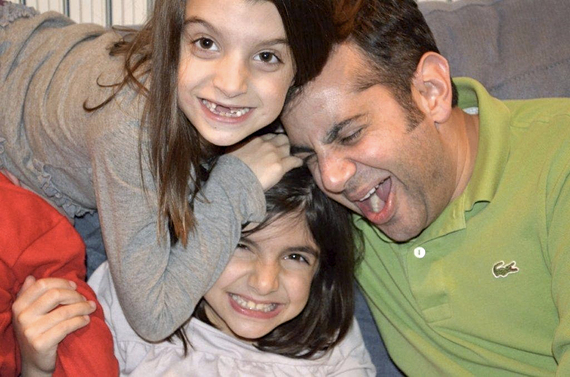 "So Shtine, what's the latest with the book? Any updates?"

That was my cue. The answer to my sister Wendy's question would serve as the opening to a conversation with my nieces that had my stomach in knots. Calla and Ava knew their "Uncle Shtiny" had quit his job in advertising to write a book but were very curious what it was about. The question was, at ages 11 and 9, were they old enough to know?

The transgender topic was everywhere. Orange Is The New Black star Laverne Cox, Amazon's series Transparent, and Bruce Jenner's gender status had infiltrated pop culture, and transgender health care reform and anti-discrimination legislation regarding bathroom use was national news. My sister and I figured if the girls hadn't already been exposed to the "T word" they would be soon, and with my book on the horizon, we wanted to shape their impressions before anyone else did. So after some debate, we decided the time to tell them was now-sitting at the kitchen table in between hands of a card game called "Golf."

"Well a bunch of editors are reading it right now and hopefully one of them will like it enough to publish it. Then maybe you girls will get to read it someday." They both smiled-especially big sister Calla, who had accomplished her goal of reading 100 books last year. "So... do you guys know what my book is about?"

Calla nodded. "It's an autobiography, right?"

"Yes, kind of. It's actually called a memoir. An autobiography is about someone's entire life from start to finish. A memoir is about a certain time period or event in someone's life. You guys don't know this but your Uncle Shtiny went through something very very hard and I wrote this book so I could help other people going through the same thing." I took a deep breath. "See, when I was born, I had a girl's body."

Calla's eyes went wide, but just for a second; as though she caught herself looking surprised and didn't want to hurt my feelings. Ava looked down at her lap and began shuffling the cards in her hands. Keep it simple. I reminded myself.

"But I knew I was a boy ever since I was four and couldn't understand why everyone thought I was a girl and why my body didn't match. I was really really sad for a long long time. I didn't think I could tell anyone or that anyone would understand. I was worried people would laugh at me or make fun of me. So I just kept my feelings inside and got sadder and sadder." Calla's eyes began to well up. I couldn't read Ava. She just kept her head down, avoiding eye contact.

"Finally I got the courage to tell Mimi and Popsie and your mom and Aunty GG. They were so supportive and helped me find the right doctors who could help me. And now that my body matches who I am, I'm so happy and everything's okay."

I paused and looked to Wendy for guidance. Her eyes had welled up too. So I changed my tone to be more upbeat. "I'm still the same Uncle Shtiny you know and love -- this doesn't change who I am... I just wanted you to know who I was. And I didn't want you to find out by reading my book!"

They laughed. I then explained that the word used to describe this is "transgender" and that they will probably be hearing the term a lot in school and on the news. I thought this was important because with kids now transitioning at all ages, schools at every level were reevaluating and in many cases evolving their policies to be more inclusive of transgender students, Simmons College being the latest to make headlines. I told the girls there might be kids in their class who are going through what I went through and that I hoped they'd be understanding and treat them like they would anyone else. Then we all kind of just sat there looking at each other.

"Well... are you surprised?" I asked, breaking the tension.

They both smiled and nodded vigorously. They didn't have any questions but Wendy and I told them if they ever did they should feel free to ask us. And that was it. The card game continued, I lost as usual and it was like nothing had happened.

The next day Calla did have one question for me: "Do I get to be in the book?"

It had been almost 20 years since I'd had to tell anyone about my gender history. Before I came out publicly in 1995, I'd told over 80 people privately, including the Executive Board at Arnold, the Boston ad agency where I was working at the time. The CEO, Ed Eskandarian, knew well in advance of the meeting. As my father, he'd had the inside track; I'd told him a few years earlier along with my mom and two sisters.

We've come a long way since then, but there is still a lot of educating left to do. And if my nieces' unfazed reaction to my big announcement is any indication, starting early is the way to go-when kids are at the age where they are most open-minded. I look at Calla and Ava and I see the generation where prejudice ends and acceptance truly begins.