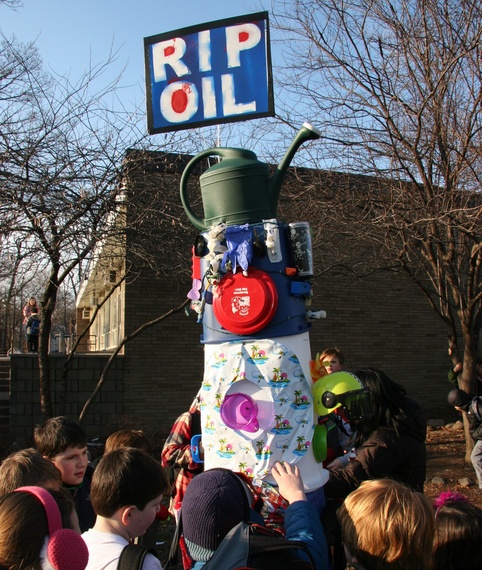 One day this past December it was nearly 70 degrees where we live in northern New Jersey and my 10-year-old son, Charlie, was really bummed out about it.

"It shouldn't be this warm, Dad. Not in December. I guess this is global warming," he said glumly.

I know how Charlie feels. It's easy to feel helpless against the big problems that we face as a country and as a world. The underlying message from the mainstream media is that we are powerless to do anything about these larger forces at work. We can be so demoralized by the belief that there's nothing to be done.

Is that the message we want our kids to have?

Personally, I want my children to believe that they can do something about these big issues, especially when they work together with others. Someday our kids will inherit the role of caretaker of this planet and I think it's important for them to start thinking about what that role might entail. Without frightening them, I believe we need to educate our children about the larger global problems we face, as well as to empower them to do something about it. I want them to understand that even the smallest action can have profound repercussions.

Shortly after Charlie shared his feelings about global warming, I happened upon a video about an "Oil Memorial" that was built in England. This gave me an idea as to how to empower my son, along with the other Cub Scouts in our Webelos den. I figured this was a good way to educate my son, the other scouts and our extended community about how dependent we are on oil for nearly everything and how our overuse of this resource is destroying our planet. The idea of creating a sculpture was also an opportunity to demonstrate how artwork can be a profound communication tool.

Like any good plan, this notion of an oil sculpture drew the best from the people I reached out to. The Principal of my son's elementary school welcomed the notion of having the sculpture placed near the school's entrance. The other den leaders were excited and ready to bring their power tools and other supplies. To decorate the sculpture, each of the scouts collected items that were oil-based or arrived here as a result of petroleum -- which is just about everything we own. The local merchants I contacted were happy to donate supplies to the sculpture's construction. It was really touching how many helping hands appeared to make this project happen.

The night before we were to construct the sculpture, I shared with my son how I was going to discuss with the scouts about our relationship with oil. Charlie was not only deeply affected but also constructive. He suggested that we needed to have something on the front of the sculpture that would explain what it was about. I asked him to write what he thought should be included and below are his words:

"We are calling this sculpture "R.I.P OIL" because oil is a limited resource, which means that it will go away someday if we use it all. We have made this oil memorial for three reasons.

I had Charlie read this statement aloud to the other scouts as a part of the presentation. After having a discussion about oil, we then broke up into groups to decorate the different components of the sculpture. The scouts and many of their parents worked together, drilling and gluing the different objects onto the sculpture.

When everyone was done, I had each child sign his name on the back of the "R.I.P OIL" sign. I explained that this is what artists do when they finish a piece of work. More importantly, it gave all of the scouts a sense of ownership about not only the sculpture but also its meaning.

The next morning, as students approached the front of the school, many stopped to view this seven-foot-tall sculpture and all the amusing items that were attached. I overheard several of the scouts proudly sharing with their classmates what items they had put onto the sculpture. As for my son, the smile on his face was broader than I remember in quite a while.

"Maybe more people will be inspired to build oil memorials, dad. Wouldn't that be great? Maybe we really started something here that can help change things," he later told me, reveling in the possibilities.

I don't know if that will happen, but what I do know is that my son is now a believer when it comes to the power of concerned citizens coming together and making things happen.

As Margaret Mead once wrote, "Never doubt that a small group of thoughtful, committed citizens can change the world; indeed, it's the only thing that ever has."

_________
Dana H. Glazer is the father of three small children and the director of the feature documentaries The Evolution of Dad and Parents of the Revolution.