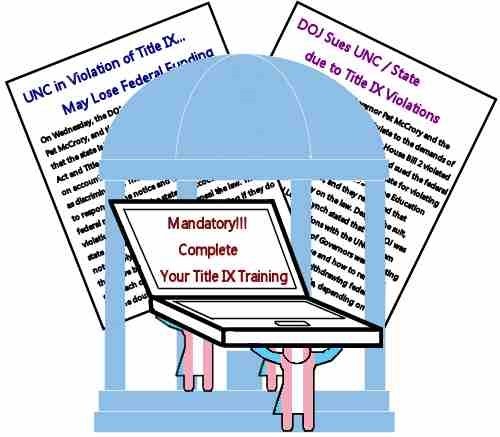 Image by B. A. Coussens

This past week's developments in the fight over House Bill 2 has intensified the discussion over the bill for many members of the UNC community. On Wednesday, the University was accused of violating Title IX of the Educational Amendments of 1972, yet since April (after HB2 became state law), the University has been requiring students, faculty, and staff to complete and/or renew their training on Title IX. In fact, the day after the DOJ issued the charges, some people awoke to an email reminding them to complete their training.

To be clear, no one is questioning the necessity of the training or protesting its general contents. Title IX training is essential. In a country wherein the university climate sees violations of Title IX on a daily basis and at a University where many of us recently discovered that a former professor allegedly used his position to prey upon graduate students, we cannot ignore the need for further education about the protections provided by the law and the resources available.

Additionally, in renewing my own training in preparation for this post, I found nothing particularly objectionable in the training module. While it has ample room for improvement, the training module is generally LGBTQ friendly, presenting LGBTQ relationships as both normative and subject to the same issues as heterosexual relationships. For example, in the section on interpersonal violence, the module uses a lesbian relationship as an example in order to break the gendered stereotypes about the limits of such violence.

The module, surprisingly, even addresses gender expression in the discussion of gender-based harassment. Its conclusion reads:

Gender-based harassment violates Title IX because it is a form of sex-based discrimination. It is harassment for exhibiting what is perceived as a stereotypical characteristic for one's sex or for failing to conform to stereotypical notions of masculinity and femininity, regardless of the actual or perceived sex, gender, sexual orientation, gender identity, or gender expression of the individuals involved.

Because this definition depends on a previous Department of Education's Guidance document, it exhibits the University's own history of following the DOE's interpretation of Title IX, and when read carefully, it also demonstrates that the University's own understanding of Title IX places its recent actions in direct violation of federal law.

Thus, the issue at hand is neither the necessity of the training nor its content. Rather, the current issue rests on the optics of the situation. The University's continual enforcement of their Title IX training without addressing the charges against them sends a message: it reads as an endorsement of the state's status quo--House Bill 2--and it indicates that the University's enforcement of Title IX applies more to some members of the University community than others, telling the transgender members of the UNC community that the University finds the violation of their rights as acceptable.

As I pointed out in a previous post, such ideas do not coincide with the principles embraced by the UNC community. To bring the University in line with the views of its own community, the University and its system need to correct their own violations of Title IX before requiring its students, faculty, and staff to complete training on a law with which it is not in compliance. Additionally, the University's administration needs to clarify to the Carolina community how it will redress those violations in future training modules and how it will work to protect the rights of all Tar Heels.

To do otherwise is to violate Title IX by partaking in the willful discrimination against members of the Carolina community. To do otherwise is to perform compliance to Title IX through training while actually defying it. And, to do otherwise is to shatter the Carolina community's confidence in the University's commitment to uphold a law that is supposed to protect everyone from discrimination and harassment. It would render moot the effectiveness of any actual training and sabotage any University efforts at increasing reporting violations of the law. For, if one part of the community cannot depend on the University to adhere to the federal law, what assurance is there for any other member of the community that it will do so for them?